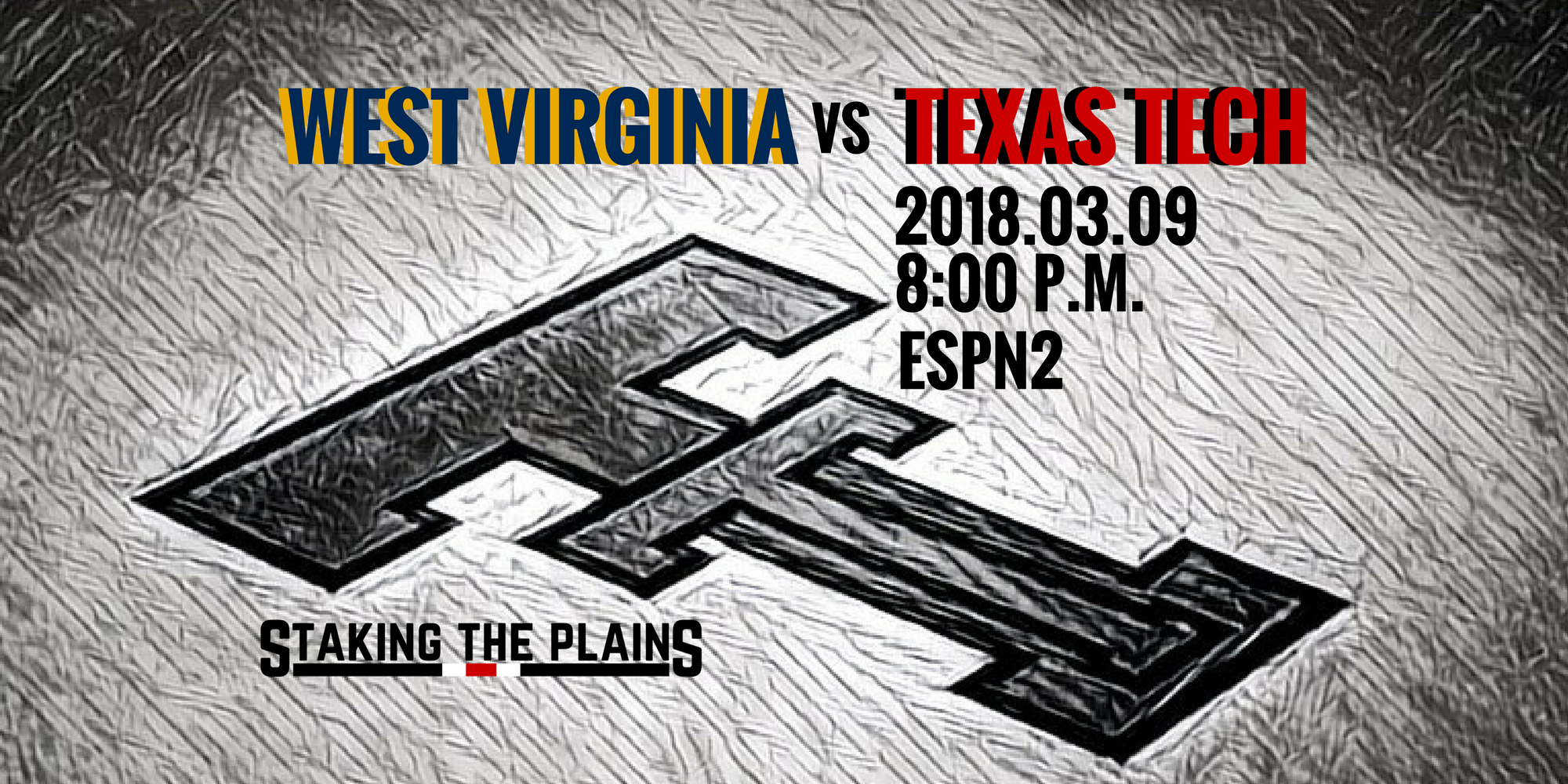 1. KenPom. KenPom has West Virginia as the 13th best team in the nation, 14th in AdjO and 33rd in AdjD, while Texas Tech is 11th overall, dropping a spot after last nigth’s game, 45th in AdjO and 4th in AdjD.

3. Scouting. The last time that these two teams met, Texas Tech had just lost to Kansas and essentially lost any ability to win the Big 12. So Chris Beard sat keenan Evans, Zach Smith and Justin Gray for the entire game, the game was one where Teas Tech looked like they were going to get blown out by 40 points because they were playing without 2 or 3 starters (depends on how you want to look at it), but ended up keeping the game relatively close despite the fact that this was West Virginia’s senior day. Now, Texas Tech is essentially at full strength and West Virginia certainly is probably raring to go.

The Mountaineers took care of Baylor yesterday, beating the Bears 78-65, which had three players score pretty much at will, Ahmad had 21 points against a pretty good Baylor frontcourt, Carter had 18, who was 4 of 12 from the floor, which was not so great, but had 11 assists for a double-double, and Miles had 19 on 5 of 7, including 5 of 6 from the three-point line. Those are going to be the main three guys that Texas Tech needs to stop, oh, and I think that they need to keep Konate off the boards, something that they weren’t able to do the last time these two teams met.

Among many things to go West Virginia’s way on Thursday night, the most surprising was the hot shooting of Daxter Miles Jr. The senior guard scored 19 points and finished five-of-six from three-point range, his second-most made in a game this season. Though he fouled out, Miles scored in double-digits for the sixth time in seven games.

5. Official Site. I’m writing this before the official site has had a chance to put up an official preview, but here’s Chris Beard last night on whether he’d like to play West Virginia or Baylor and also what it means to have made it to a semifinal game since 2005:

Q. You’ll either face Baylor or West Virginia two entirely different styles of game, but you’ve split with both. Do you have a preference?
CHRIS BEARD: No, just — this league is so good, you guys have seen it, every game has been a 1- possession game in this tournament so far. No, there’s a lot of things that I am looking forward to, but playing against another Big 12 team is not one of them. We have extreme respect for West Virginia and Coach Huggins, and Baylor and Coach Drew, two teams that are going be in the NCAA tournament. So I’m not looking forward to playing either one of them, but I’m looking forward to competing again in this tournament.

Q. First time you guys have made a semifinal since 2005. I wonder if you could reflect on that accomplishment and also what it might mean for you next week as a way to prepare for the NCAA.
CHRIS BEARD: I was here in 2005 working for Coach Knight and we had some success in this tournament, played a change-up game against Coach Sutton and Oklahoma State. When you build a program there’s going to be a lot of firsts. You’ve got to do things that haven’t been done before and those are things to reflect on after the season which we definitely will and right now we are just trying to stay in the moment. I respect the question. I would give the guys all the credit. These guys have a chip on their shoulder and they’re trying to do things that have never been done before at Texas Tech. I am really appreciative and thankful to be a part of the ride with these players