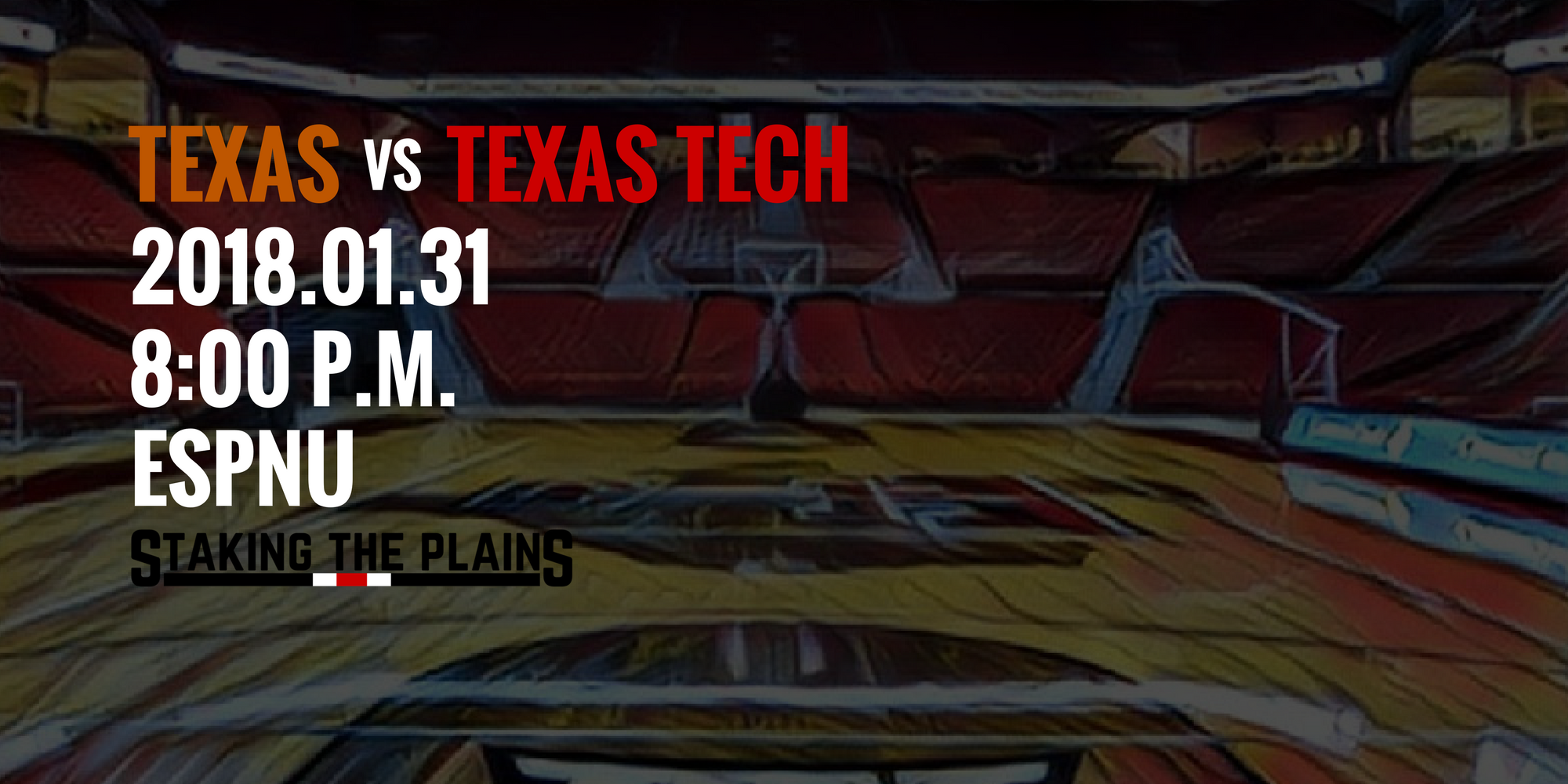 The Red Raiders host the Longhorns.

2. Stats. Via RealGM, Texas Tech has a statistical advantage in the four factors, shooting at a eFG% of 53% to 50% for Texas. The Red Raiders grab more offensive boards, 34% to 29%, shoot free throws at a higher rate, 28% to 23% and both teams have about the same turnover rate, Texas Tech is at 16% and Texas is at 15%. Of course, these stats were pretty much true when these two teams met in Austin and Texas dominated the ball inside and then they also shot the ball really well from the outside. This is really about getting Bamba away from the rim.

3. Scouting. Since the Texas Tech game, Texas has played pretty well, other than being on the road at West Virginia where the Longhorns were blown out. The Longhorns grabbed two wins at home, against Iowa State and Ole Miss, the key is that all three of those games came at home and it’s true of the rest of the Big 12. Texas has not won a Big 12 game on the road and if it weren’t for Texas Tech’s win against Kansas in Lawrence, the same could be said about Texas Tech. I’d expect these things to hold serve for this game, Texas Tech is significantly better at home and struggles on the road (the South Carolina game is the outlier). The key is stopping Bamba and Osetkowski in the middle, Osetkowski had 12 points and Bamba had 15, while Bamba had 5 blocks. Roach was really the difference maker on ofense because he made 2 of 5 three point shots and scored 20 points off the bench the last time these two teams met.

The Red Raiders (17-4 overall, 4-3 in the Big 12) never allowed a two-game losing streak, or a couple of rough shooting nights for that matter, get into their heads. Thanks to their ability to fight through adversity, the Red Raiders find themselves in a three-way tie for second place with West Virginia and Oklahoma in the conference standings.

“This was very big win for us,” Texas Tech senior Keenan Evans said by phone Saturday after the win over the Gamecocks. “Hopefully, these two wins in a row will get us back on track. We’re looking to get this thing rolling into the Texas game. Hoping for a great fan base at home.”

Evans, who scored 18 total points on 5 of 20 shooting in the losses to Texas and Iowa State, continued to preach his get-back-in-the-gym-and-shoot mentality. The senior shined in the next two wins, combining for 47 points on 14 of 25 shooting from the field on the way to Big 12 Player of the Week honors.

5. Official Site. The official site with the official preview and we hear from head coach Chris Beard discuss the game tonight:

“It’s a big game Wednesday,” Beard said. “It’s the next game on the schedule as always is our approach. Texas is not only a really good team that’s well-coached, but they’re playing great basketball right now. You always hesitate as a coach to talk about somebody else’s team. Shaka and I are friends, but I will tell you that I think they are the most talented team in the Big 12. They’re young, and they have overcome a lot of adversity with Andrew Jones and some injuries and stuff like that to Roach III. Player-to-player on their roster, they’ve got really good players. At least four guys are going to play in the NBA. If Mohamed Bamba isn’t the best player in college basketball then he’s part of that conversation. Everybody in Lubbock should buy a ticket and come see him play on Wednesday because you won’t see him again in Lubbock. They have our full attention because they are a good team. They obviously beat us the first time we played them this season, and we just have a lot respect for the talent they have on their roster.”