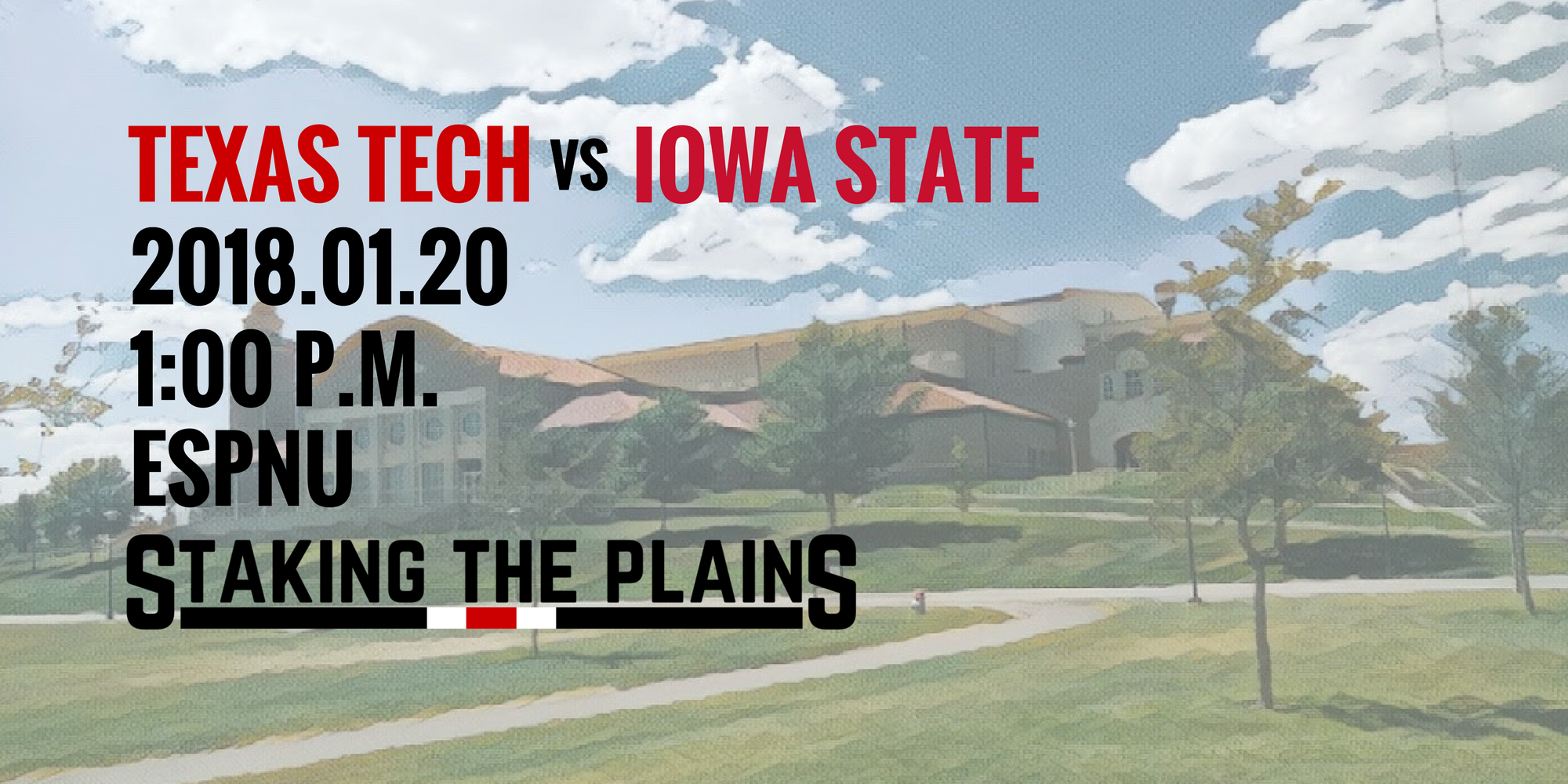 The Red Raiders travel to Ames.

2. Stats. Texas Tech shoots better than ISU, and this is despite ISU having a really good offense. The Red Raiders have an eFG of 54%, while ISU is 51%. The Red Raiders are also better rebounders on the offensive end, grabbing 33% of offensive boards and Iowa State is at 29%. Texas Tech may not have gotten to the line very well against Texas, but there are few teams like Texas in terms of size and Texas Tech is still a team that has a free throw rate of 27%, while Iowa State is at 22%. Both teams are around 15% in terms of turnover rate, 14% for ISU and 15.5% for TTU. Haslametrics has Texas Tech as the 8th best team while ISU is 105th, and predicts that Texas Tech should win 77.20 to 64.24.

3. Scouting. The most fun thing to watch for ISU is Weiler-Babb, who is an absolute production machine. You can see that he averages 12 points a game, but he also averages 7.4 rebounds and 7.6 per game at the small forward spot as well as 1.2 steals a game. And he does this without going to the line really very much at all. And of the two guards and Weiler-Babb, they all play 32+ minutes per game, so it might be really beneficial to get those three in some sort of foul trouble. I remember Young being just an athletic wonder last time that Texas Tech played ISU and if anything gets him in trouble, it’s fouling a bit too much. I’d imagine that Zhaire will take Weiler-Babb initially and maybe he’ll do more of what he did against Texas, try to initiate the offense. I need for Evans to shoot better than what he did and the big guys to have a bigger and more positive impact on the game.

4. Reading Material. A-J Media’s Carlos Silva, Jr. writes about how some of the seniors need to help out on the offensive side of the ball as the Red Raiders face Iowa State:

Now, Stevenson, along with veterans Tommy Hamilton IV and Norense Odiase, will look to step up without an important piece of their team — Zach Smith — as they look to bounce back in a key Big 12 road contest against Iowa State in their second straight Big 12 road game.

“Those are three seniors, Norense a redshirt junior,” Texas Tech coach Chris Beard said when asked of how the coaching staff is trying to help Hamilton IV, Odiase and Stevenson get going on offense. “I don’t hide from the truth: those three guys have got to get better. … We’re doing everything from a coaching standpoint to help those guys. And those guys are working really hard themselves.”

Until players step forward to become leaders — and I’m not only talking statistical leaders – even being selected for the NIT won’t happen. That’s actually the best-case scenario right now — if somehow the Cyclones can figure it out enough to reach at least a .500 record.

When veteran Donovan Jackson said “nobody on our team played with energy and effort” after Wednesday’s 23-point loss at TCU, that should have sent off sirens and raised red flags about something that’s been evident for a while:

That this team needs a player to constructively say the same things that Prohm said publicly after the Cyclones lost for the fifth time out of six Big 12 Conference games.

“It’s certain guys on certain days, but we have to get it on an everyday basis,” Prohm said before practice Friday. “That’s part of the learning process.”

Ames Tribune’s Travis Hines also writes about how the Cyclones need to be leaders:

So who is that player? The Cyclones simply don’t have a natural fit. Weiler-Babb is the likeliest candidate as he’s now in his third year in the program, but he’s playing the first major minutes of his career. Donovan Jackson is the lone senior starter, but only in his second season at ISU as a junior college transfer and played a limited role last year. ISU’s best players may be Lindell Wigginton and Cameron Lard, but as freshman, do they have the cache and comfort level to lead?

There’s no simple answer, and the question becomes more important as the adversity level rises for a young team not projected to win many more games. It’s a central challenge for a rebuilding season.

5. Official Site. The official site has your official preview and Chris Beard about the state of the team:

“I have a lot of confidence in our team that we won’t get too high or too low,” Texas Tech head coach Chris Beard said. “This is an 18-round fight. I started today’s practice telling the guys that we saw adversity at Texas. We got punched in the mouth, do we think this will be the last time? It’s just the reality of this league that we are playing in. What we are really talking about is mental toughness, perseverance, consistency and putting yourselves in a position every night to have a chance. Even with the disappointments in Austin, we cut it to four points with seven minutes left in the game. We cut it to six again, and we gave ourselves a chance. We didn’t play well enough to win. Give Texas credit, they played great. If we continue to put ourselves in these positions, continue to believe in each other, continue to play for each other, continue to execute the day-to-day process and continue to be a good team that practices well every day, then we are going to win our share. Yes, it is a grind. Every game is like this, and Saturday at 1:00 p.m. in Ames will be no different.”