How do South Florida and Texas Tech match up? 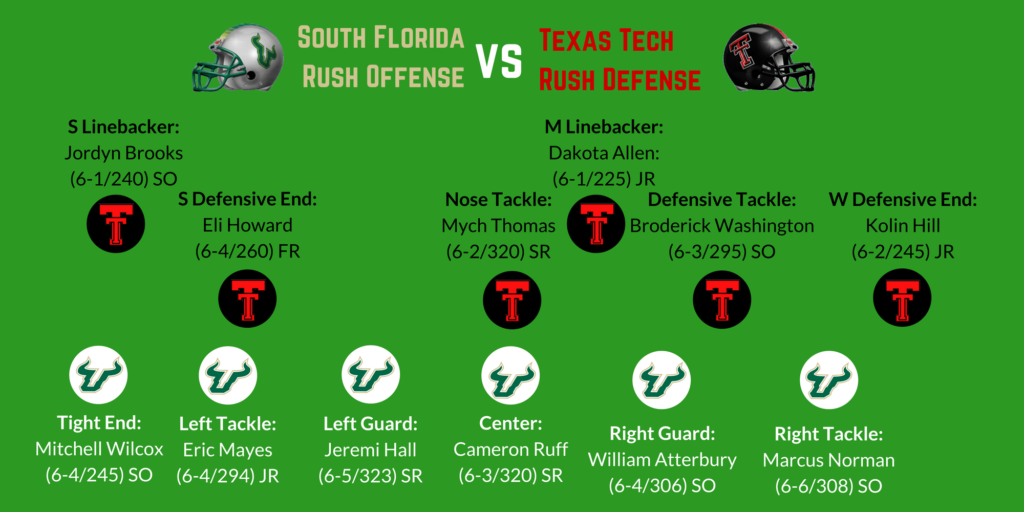 This rushing offense really is a three-headed monster led by Flowers, who does a terrific job of distributing the ball. It’s a ton of zone read stuff where Flowers is very good at making the right decision about whether to keep the ball or hand it off to one of his two very talented runners.

There’s also a ton of Baylor’s concepts running through the South Florida offense. Strong kept the two Texas assistants that he hired that was goign to bring a Baylor type of offense to Texas. Well, these guys stayed with Strong and they still run the receivers really wide, outside the hash and that creats significant pressure points for the run defense. It also creates lots of one-on-one opportunities for receivers, but that’s for a different day. With the receivers split so wide, the safety has to be careful about where and how they cover the running game.

As you’ll note, South Florida employs a tight end that they use regularly, and they’ll use an H-back as well that I think is their tight end, Wilcox.

South Florida is a weird running team. Statistically, they rush for a ton of yards, but in terms of advanced stats they don’t do all that well . . . 107th in Rushing S&P+, but 9th in rushing offense. Try to figure that one out.  The Bulls have three players that all run very well, their two running backs are near mirror images in terms of body-type and Flowers has been shown to be a terrific runner that truth be know, has really run for over 1,000 yards, but those yards seen to the right includes sacks If you want to take out sacks, then Flowers averages 6.5 yards per carry and has 1,075 yards rushing overall.

Texas Tech has been really good at stopping the run this year. They’ve surpassed what I thought they would do defensively in terms of stopping the run. Texas Tech is essentially a top 50 rush defense and that seems crazy to think, but I believe it to be true. In a ton of metrics, they grade really well.

That success probably starts with the big guys up front, Mychealon Thomas has been absolutely fantastic and the light has gone on with him. He changed his body from last year to this year and it made a difference. Thomas paired with Broderick Washington has been an absolutely fantastic combination. Thomas has had a success rate of 2.6% (the lower the success rate the better as it is the percentage of successful plays the offense has against a particular defender) and Washington’s is 31.6%, which is really good too, it’s just over-shadowed by how good Thomas has been.

We’d be remiss if we also didn’t include guys like Eli Howard, Kolin Hill, who has played significantly better this year after a brief move to linebacker to start the year (we’ve never really followed up with that) and Tony Jones also making plays in the backfield. Run stuffs for these front guys: Hill 4; Washington 4; Thomas 5; Jones 4 and Howard 5.

The other part of the equation has been the absolutely terrific play of the linebackers, Dakota Allen and Jordyn Brooks. Allen has been an absolute revelation, 11 run stuffs this year and a 37.0% success rate and has been an absolute leader on defense, while Brooks has improved significantly from his freshman to his sophomore year, as Brooks has 4 run stuffs with a 45.2% success rate.