We’re talking about stats, all the stats between Houston and Texas Tech.

When Texas Tech Has the Ball 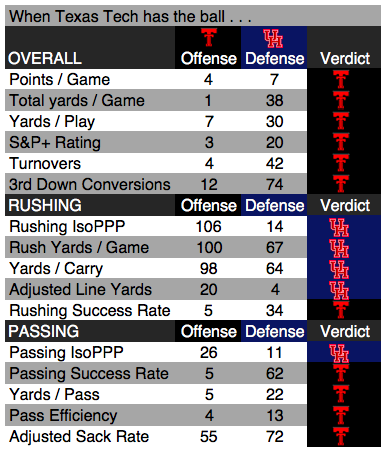 Last week, I totally forgot to mention that these stats are courtesy of Football Study Hall and CFB Stats. Both are absolutely terrific for any sorts of football stats. They are both terrific resources.

As far as running the ball, Texas Tech has somewhat come back to earth a bit in terms of running the ball and I think the sweet spot for how Texas Tech runs the ball needs to be a bit higher. They need to do a better job of continuing to run, even if Shimonek is playing unbelievable.

And technically, the Houston defense is good, probably not great, but they’ll cause some issues defensively that Texas Tech will need to be on-point and to expect a high level of offense for the entire game is probably unrealistic. Don’t expect 50 points on Saturday.

When Houston Has the Ball 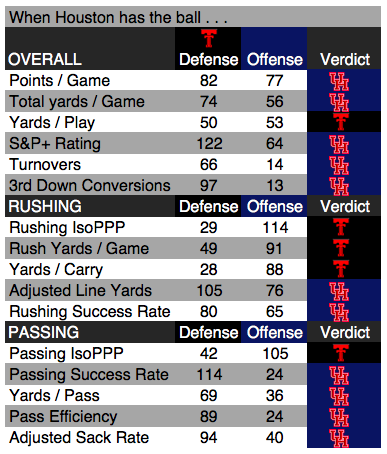 Houston is more efficient than I expected passing the ball, but I really don’t know how good Arizona is and Rice. I think I know about Rice, but Arizona could b similar to Texas Tech in that they will finish near the bottom of the Pac 12 (the same oculd be said about Arizona State too, but I think ASU is slightly better).

Meanwhile, Texas Tech has been pretty good at stopping the run overall and I’m surprised that Texas Tech ranks ahead of a pretty terrible Houston running game. But maybe more than that, Texas Tech has shown a propensity to actually stop the run and I wonder how that would play if Houston really can’t run the ball, they’ll be pretty much completely reliant on Allen to pass them out of situations. Stop the run and you can do a lot defensively.

The other thing to be concerned about is the third down defense. That really does need to improve and I’m surprised at Houston’s propensity to gain third downs.