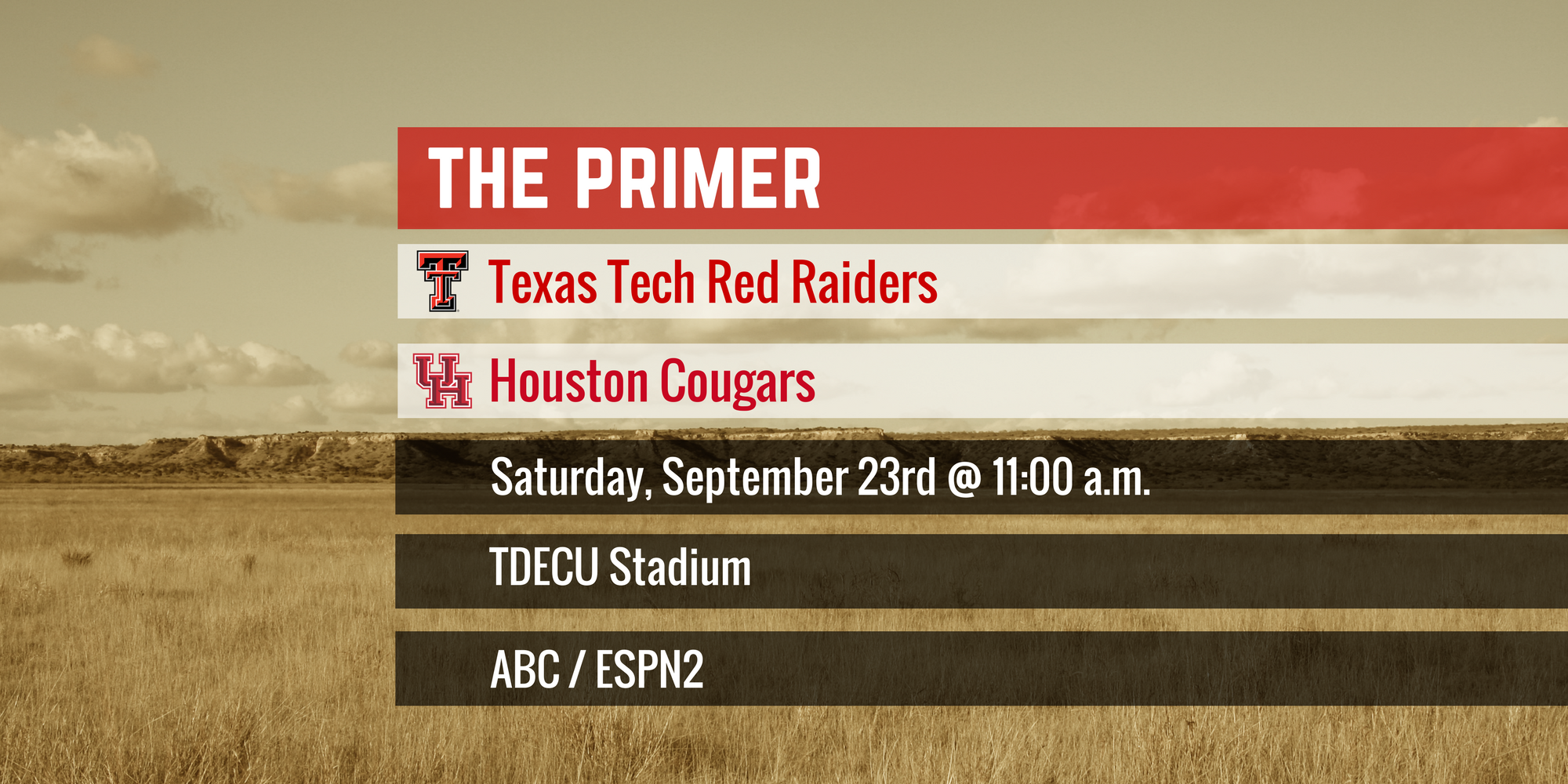 An early look at the Houston Cougars.

Houston took care of business against Rice, a team that has seemingly been stuck doing the same thing for a really long time and hasn’t really evolved. Houston dominated the first half, scoring all of their 38 points in the first half and scoring none in the second half. In fact, Houston missed a field goal, then turned the ball over on downs, a punt and thend the game ended. Rice was obviously pretty futile offensively as well, but houston struggled. The Cougars did play their second string quarterback, but I don’t know when he started to play. Houston won a tough fought game against Arizona on the road, 19-16 to start the year. I think the Houston defense was the star of the show in this game.

Texas Tech won their first game against Eastern Washington, a game that didn’t look as good last week, but the Eagles did get a nice win on the road to whip up on Fordham, 56-21. And Texas Tech won a thrilling game against Arizona State, a game that was maybe closer than it should have been, but to give Texas Tech credit, a Power Five win against a non-conference opponent is not something I think I’ll diminish in any way.

This may be most important for fans, a bit of a game for Houston to show that they belong in the Big 12. I always tend to feel that this is the case when Houston plays a Power Five program and this may be even more accurate for this game because Houston feels that they belong in the Big 12 and I’d guess most fans feel that Houston is “better” than Texas Tech. And “better” is however you want to define it and that’s the great talking point between fans. Houston is maybe similar to TCU before TCU joined the Big 12 in that they dominated their conference, but once they joined the Big 12, the Horned Frogs have been good, one great year, but good. Houston hasn’t been as dominant, going 9-4 last year, which is great, but losses last year to Navy, SMU, memphis and San Diego State while beating ranked teams Oklahoma and Louisville show how Jekyl and Hyde the team can be.

For Texas Tech, I don’t know that they get too caught up in this “big brother” / “little brother” because I think getting over the hump of a program with a winning record is more important than worrying about the whole Big 12 thing. In fact, I’d imagine that’s the last thing that the players and coaches are thinking about and truthfully, this discussion is more fan driven than anything else.

What to Know About Houston

Kyle Allen (6-3/211) leads the Houston offense and he’s been okay thus far. Against Arizona and Rice he completed a high percentage of his passes, but the deep threat wasn’t there against Arizona, but did a much better job of driving those passes against Rice. Duke Catalon (6-0/215) and Dillon Birden (5-10/200) are the main backs, essentially splitting carries. Catalon is the former Longhorn and he’s run 25 times for 109 yards and a touchdown and you’lll note the stats on Birden above.

The receivers are all of good size, over 6’0″, which is pretty rare for a lot of programs. There are also three seniors, Linell Bonner (6-0/200) appears to be more of a possession guy, Steven Dunbar (6-3/202)is maybe a bit more of a deep threat, averaging over 10 yards a catch and John Leday (6-0/200) didn’t do all that much, but he does have 11 catches for 66 yards. Sophomore receiver Keith Corbin (6-2/193) appears to be a significant deep threat and Houston also rolls with a tight end at least some of the time, the starter being Romello Brooker (6-3/240), and he’s not necessarily a huge receiving threat. Bonner has 19 catches for 191 yards and a touchdown, while Dunbar has 12 for 129.

The defense is led by the next “manimal”, Ed Oliver (6-3/290). For those of you keeping up, the reference to the manimal could be one of two things: 1) it could be a reference to former Dallas Cowboy Randy White, who was part man and part animal; or 2) maybe a reference to a television series “Manimal” where a doctor morphs into an animal in order to fight crime. Either way, Oliver is absolutely unbelievable as a player and if I were in charge of drafting, he’d be my #1 pick whenever he can declare, which is after next year I think. There may not be a more disruptive player that plays defense in college football today. He’s that good. And don’t let anyone ever tell you that defensive tackles aren’t supposed to have lots of stats.

At linebacker, the Cougars are led by D’Juan Hines (6-1/230) and Matthew Adams (6-1/237), both seniors and would guess that as long as these guys aren’t JUCO guys, they were recruited by David Gibbs and Zach Spavital. Adams has 19 tackles, 2.5 tackles for a loss and 1 pass broken up, while Hines has 11 tackles and 1 quarterback hurry. Khalil Williams (5-11/210) is the third outside linebacker, so maybe he’s a hybrid safety/linebacker as he’s really active with 8 tackles, 4 tackles for a loss, 1 sack and 1 pass broken up.

Via OddsShark, the line opened at 7, but has pretty much immediately dropped (like within an hour) from 7, to 5.5 and then has settled in at 6 for the most part. Heck, in one book, the line went down to 4.5 for 2 hours before going back to 6 (if you click on “Line History” where the line is, you can look at the line history.