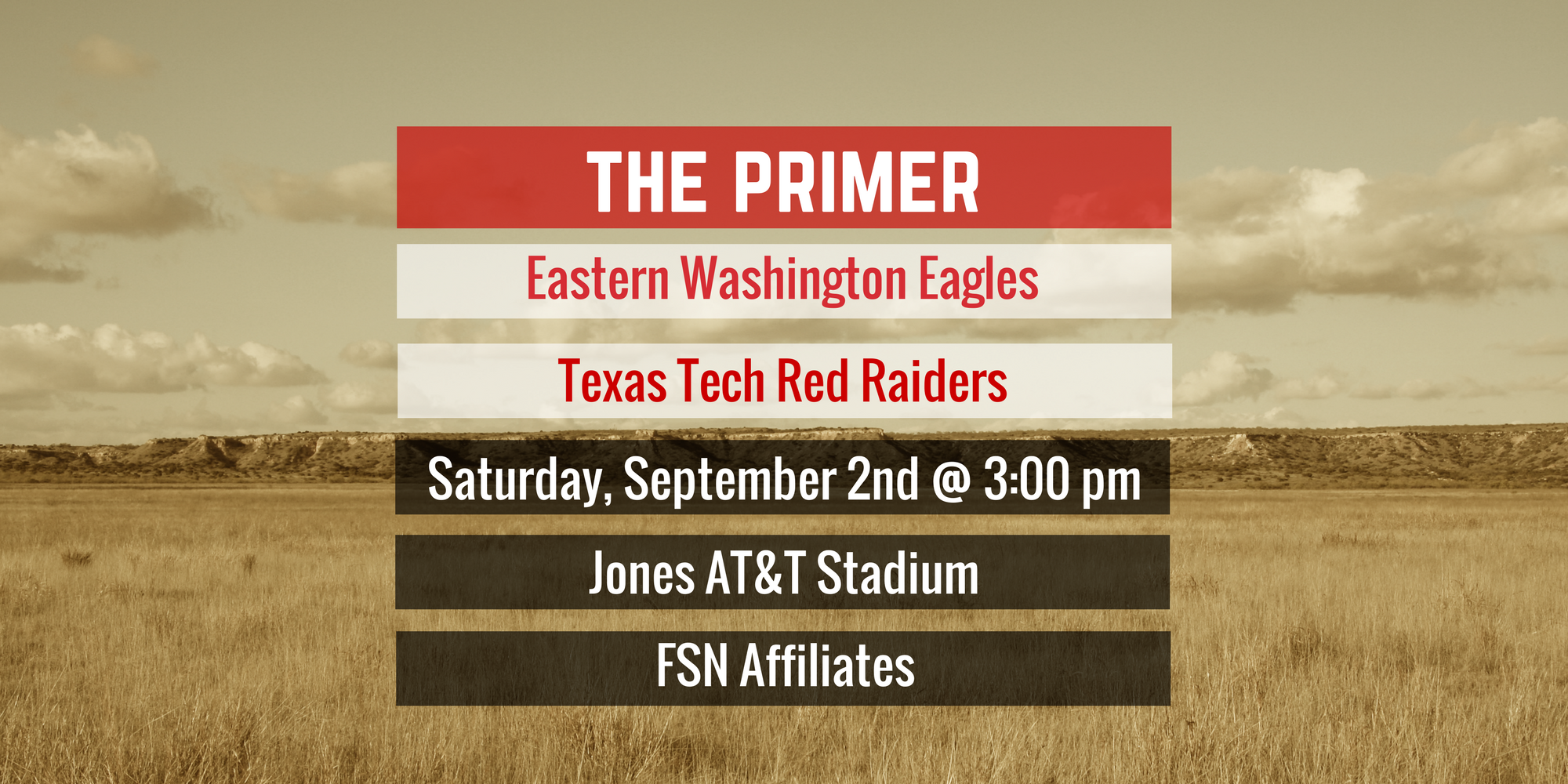 An initial look at the Eastern Washington Eagles and Texas Tech as they face off in the first game of the year.

Well, we enter the season with the Eastern Washington Eagles coming off of a 12-2 overall, including a win over WAshington State and ending the season with a loss to Youngstown State. The expectations are high for the Eagles as they return their quarterback Gage Gubrud, who completed 68% of his passes for 5,160 yards, 48 touchdown and 14 interceptions, while running for over 600 yards on the ground.

Texas Tech comes off of a disappointing 5-7 season and the expectations nationally are low, some preseason prognostications are predicting a 9th place finish for the Red Raiders and are seen as a team that is falling rather than rising. For some Texas Tech fans, they are predicting that Texas Tech will improve and that the defense is making progress and will be better than expected. With David Gibbs as the defensive coordinator for his third year, at the very least, the defense has had some consistent leadership at the top for the first time since Ruffin McNeill. That’s a long time. Offensively, Texas Tech is expected to continue what they did last year, just like they always have done, with Nic Shimonek under center, the hope is that the offense continues their record setting pace and the defense make some improvement.

Well, from Texas Tech’s perspective, this is ridiculously important to get on the right track and if anything, we, as a collective group, to put stock into what happens on the field. I always feel like we tend to overlook things that happen during this game and somewhat shrug it off as first-game-whatever. Take stock in what happens in this game, good or bad. Let’s go ahead and let this game be a barometer for what we think this team is about.

What to Know About Eastern Washington

There’s been a lot of production that was lost at Eastern Washington, on both sides of the ball, the top handful of tacklers are all gone and the top receivers, all 1,000 yard receivers, have all graduated. The biggest presence for the Eagles is defensive coordinator Jeff Schmedding, who is in his 14th season with EWU.

Defensively, the Eagles return three of their four players along the defensive line, including the “buck” end, Albert Havili (6-2/270), tackle Andre Lino (6-3/270) and nose guard Jay-Tee Tiuli (6-4/320). The linebackers are all new, but the two cornerbacks, Josh Lewis and Nzuzi Webster both return from last year and both were starters. The highlighted Mitch Fettig returns at one safety spot while Tysen Prunty returns at the other.

One of the keys for the offense, aside from the quarterback returning, was that all five offensive linemen returned, but then starting left tackle Nick Ellison ended up retiring, so the key to the offensive line ended up walking away in the middle of preseason camp. The back-ups were freshmen Brett Thompson and Nick Blair, but EWU could move some players around so that the key spot for the Eagles isn’t a true freshman.

The straw that stirs Eastern Washington’s season is Gage Gubrud and as he goes, so goes the Eagles and I think that’s going to be even more prevelant this year and in particular for this game.

Via OddsShark, there is no opening line right now.