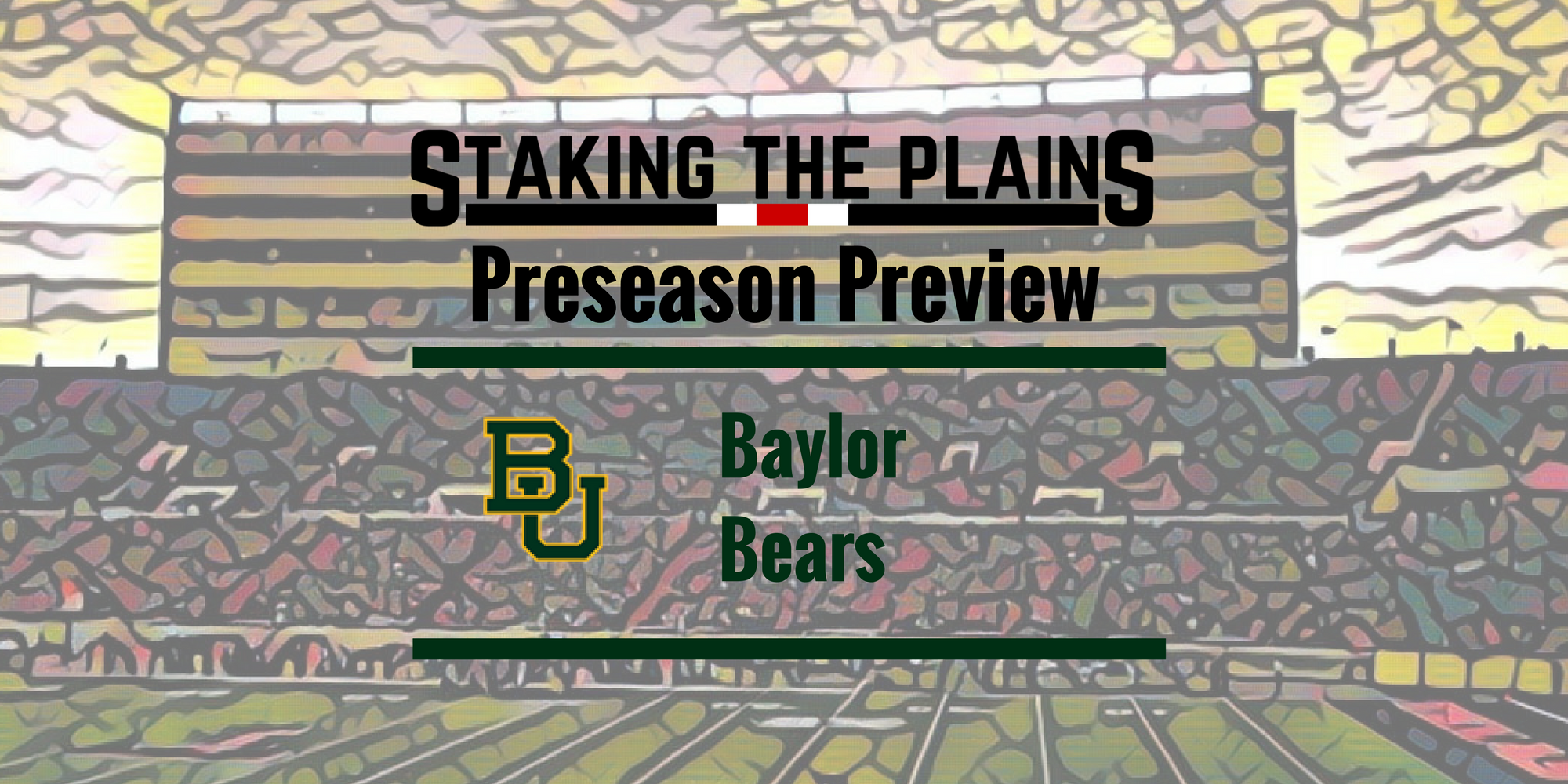 Your guess is as good as anyone else as to what Baylor will be.

A tale of two halves of the season as Baylor rattled off six straight wins to start the season: Northwestern State; SMU; Rice: Oklahoma State; Iowa State and Kansas. And then there were six straight losses: Texas; TCU; Oklahoma; Kansas State; Texas Tech; and West Virginia. The final game was against Boise State, where Baylor won handily. Of the six wins, the closes game was against Iowa State, where they only won by 3. Of the losses, the Bears lost to Texas by 1 and West Virginia by 3 with all of the other losses being of the blowout variety.

Smith is a preseason All-Big 12 pick after a 2016 season where he had 54.5 tackles, including 12 tackles for a loss, 7 sacks and 1 forced fumble. Smith is one of the few defenders for Baylor that made a significant impact last year. It’s tough going back and forth between the stats from last year and figuring out who is back and who isn’t. For example, Travon Blanchard would be a terrific return for Baylor, a big safety (6-2/205) that had 9 tackles for loss and 5 pass break-ups to go along with 60.5 tackles, but he’s not listed on the spring two-deep. If anything, Baylor will be very senior heavy this year. I counted 6 juniors in the top tacklers from last year and 3 of those were seniors and now gone.

Hasty doesn’t have great stats from last year, but he was a true freshman sharing time with Terence Williams and Shock Linwood. Given how Rhule wants to run the danged ball right up your tail, I think Hasty could be really good and with Williams backing him up, that gives you two different types of runners, Williams being a bigger back (6-1/220) while Hasty is quicker. Hasty ran for 623 yards on 119 carries for 5.2 yards per carry along with 3 touchdowns. Williams led the team in rushing, going for 1,048 yards on 185 yards for 5.7 yards per carry and 11 touchdowns. Baylor is going to be fine at running back.

Young was very productive last year, registering 75.5 tackles, which was second on the team, including 9 tackles for a loss, 4.5 sacks and 1 pass break-up. It appears that Baylor will pretty much employ a 4-3 defense with your rush and strongside defensive end, a nose and defensive tackle with three linebackers, all in the 220 pound range.

I’ve forgotten much of what happened last fall when the attrition occurred, but it was my recollection that of the 2017 class, a ton of those guys ended up leaving and just deciding to go some place else. That will be significant, but I don’t know if it will really affect Baylor this year. As mentioned previously, this s going to be a pretty senior heavy defense this year and Baylor always did a pretty decent job of developing their players. The biggest adjustment will be how Rhule and his defensive coordinator adjust to the speed and tempo of Big 12 offenses. I get that it’s still football at the end of the day, but it can still be an adjustment.

On offense, I think things are a bit more tricky. Sophomore quarterback Zach Smith does return and for what he was asked to do last year, I thought he was just fine and should be better. However, as of the spring, the competition at quarterback is between Smith, Anu Solomon (the Arizona transfer) and true freshman Charlie Brewer. Baylor will be more of a traditional offense, which is a departure from Baylor’s previous style. Truthfully, we really don’t know what Baylor will be exactly because I’d think that Rhule really never had the speed that he has available to him at Baylor. Lots of talent left at the skill positions even after the departure of K.D. Cannon and Ishmael Zamora, but that may be better for the program overall. If Rhule is attempting more of a pro-style offense that eats up clock, something his Temple teams did, then I think that’s an interesting concept and one I like. It will be interesting to see how/if Rhule adjusts to the Loyola-Marymount type of play that the Big 12 is so good at.

I find it interesting that in the game last year, Texas Tech put it to Baylor, but that didn’t really springboard Texas Tech in any significant way. I think the reason was because Baylor was a mess at the end of the year and national folks had not forgotten about Iowa State for Texas Tech. By the 10th game of the year, I’m not at all sure what Baylor will be. I’m not sure if the depth issues (if there are any at all) will affect them or if they’ll be finding their groove. This will also be a significant change of pace for Texas Tech, a season of spread offenses will be stopped cold for one game against Baylor and I’m interested to see how that works for Texas Tech. Honestly, I have more questions than answers at this time. I know a lot of folks are predicting a rough season for Baylor because of the loss of essentially one full class, but maybe they’ll be able to weather the storm. I hate to be so definitive when we really haven’t seen something like what happened to Baylor.