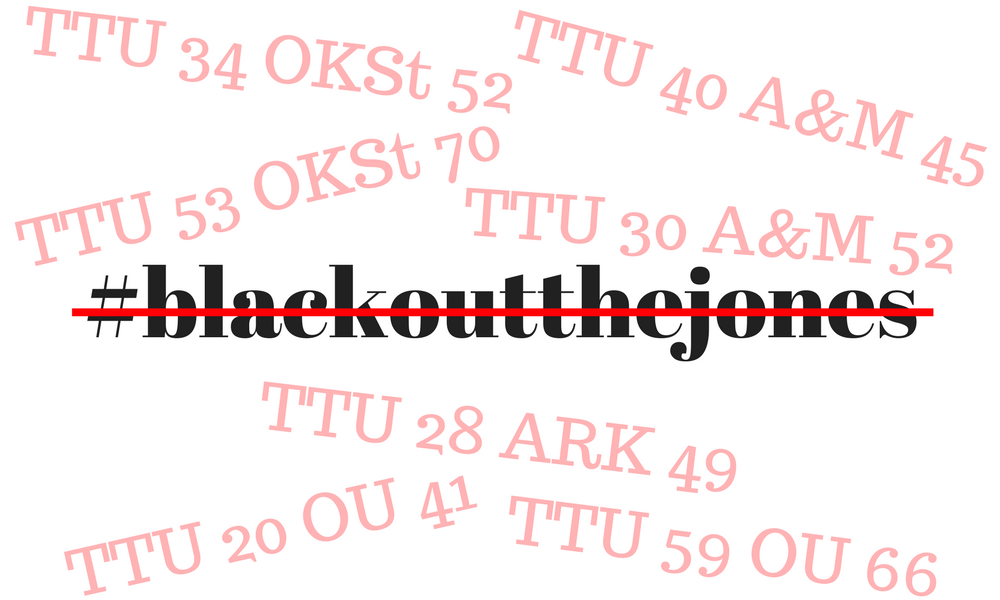 At what point do you quit drilling for water and just hope for rain?

At least once a year in Lubbock, Texas Tech announces its annual “Blackout Game” at Jones AT&T Stadium. Typically, this is a night game pitted against a top-ranked team and/or heated rival where the team and the fans wear all black as an act of solidarity and intimidation.

The best I can tell, the tradition really took hold in 2007 against Oklahoma where Texas Tech defeated the No. 4 Sooners in Lubbock. The teams and fans all wore black for that game.

The blackout was called upon twice in 2008 as Texas Tech took down No. 1 Texas and No. 9 Oklahoma State in back-to-back weeks. It appeared that a winning tradition was born.

Adam, a friend and fellow Red Raider, mentioned a while back that this gimmick hasn’t worked at the Jones for Tech in years. I wasn’t fully sure until I started looking at the numbers, but it appears he is right.

The only win since 2008 for football came against TCU in 2013 (the fox game). What’s interesting is that even though it was deemed a blackout, the team wore grey/gray unis. In a sense, that disqualifies it. The men’s basketball team also has a disqualifying win over Oklahoma State (the Marcus Smart game) as they were wearing all white.

The football losses since 2008 have been very poor showings on defense. If my math is right, Texas Tech allowed an average of 53.5 points/game including scores of 70 and 66 in the last two.

Texas Tech football, as we all know, is in a state of uncertainty. The blackout era has long since passed. It left Lubbock when Leach was fired, but we continued to cling to it even when it didn’t make sense. Coach Kingsbury has implemented the #EarnTheDoubleT mentality at practice. Sure, it’s just a gimmick, but maybe it will work. What if we apply the same thing to the blackout? There is a lot more that goes into winning a football game than who’s wearing what (#fashionblog), but Texas Tech needs to win a big home game at night a time or two before we get the old #blackoutthejones hashtag going.

Texas Tech has traditions great enough for other schools to outright copy. Keeping the “Blackout Game” alive when it has been so ineffective for so long feels forced. Let’s let this one go as if it were a flour tortilla at kickoff.