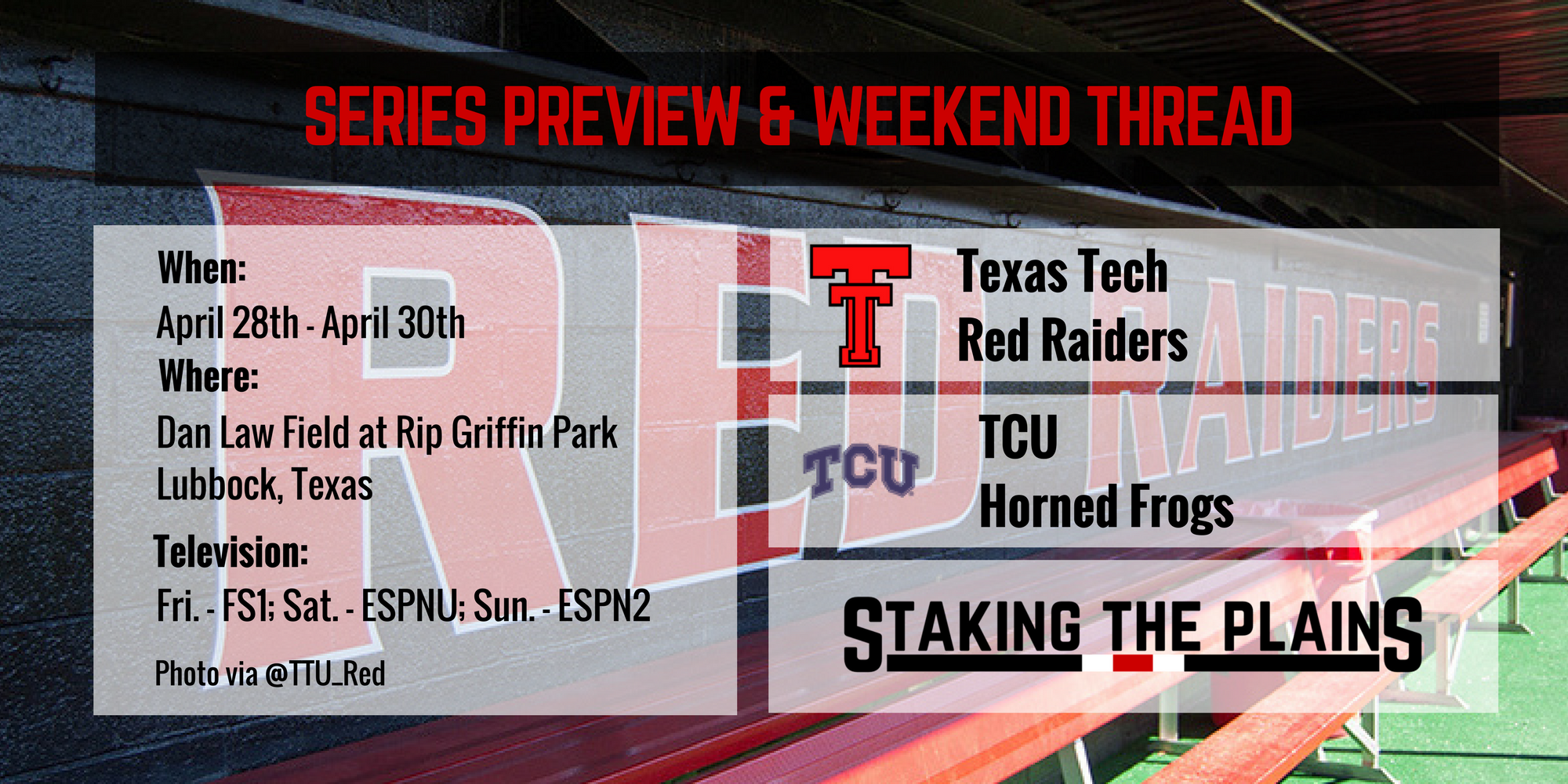 The Red Raiders host the top team in the Big 12.

This is what we’ve all been waiting for all season. Texas Tech finally gets TCU at home, is a few games behind the Horned Frogs in the Big 12 standings and has a chance to take the lead in the Big 12 with a sweep. A sweep seems incredibly unlikely because TCU is good. Very good.

The most interesting thing about the Horned Frogs is that their starting pitching isn’t untouchable and that may be the most positive thing about this series. With that being said, TCU has swept Oklahoma State and Kansas State, while winning the series against Kansas and Baylor while losing the series against West Virginia. For whatever reason, my thought was that TCU would be darn near infallible this year because they just always seem to have such stellar pitching, but this year, it’s a bit different. TCU is without their ace, Jared Janczak, on Friday. Of course, I write this and I’m sure that I’ve jinxed the series and you can blame it all on me after Sunday if things go poorly. Oh, and TCU lost to SFA, yes that SFA, in a mid-week game. It happens to the best of them.

LAJ’s Nicholas Talbot previews the series, but more importantly, details why head coach Tim Tadlock was suspended for two games, which was apparently for meandering around the stadium, hanging around a tent area near the third base line, and then was asked to move and went to the New Mexico ticket office and that’s where he stayed the rest of the game. Go read the whole account for details, but it seems crazy that Tadlock was suspended for that. Tadlock didn’t seem to be too upset, maybe because he didn’t want to be fined.

“Their starting rotation even with Janczak down will be a handful and they have a beast in the middle of the lineup (Luken Baker) that has caused a lot of problems for Big 12 teams and he creates opportunities for some other guys,” Tadlock said. “Jim (Schlossnagle) does a great job for them.”

The Red Raiders used a starter-by-committee approach to their Friday opener last week against Oklahoma State.

“It’ll test your pitching depth, that’s for sure,” Schlossnagle said. “It remains to be seen. We had two good starts out of our three games this past weekend. Gingery might be the pitcher of the year in the league. They have a ton of guys that do a lot of good things.”

This is going to sound a bit crazy, but of all of the results from a loss, I’ll sorta take this. The fear for me was that Texas Tech would get 2 innings from the starter, Erikson Lanning, and then the bullpen has to pitch a ton of innings on Friday night. Lanning went 4 innings, maybe 2 more than what they thought they might get and perhaps, just perhaps, this helps the team significantly moving forward for Saturday and Sunday. Lanning went 4 full innings giving up 4 hits, 2 runs, 1 earned, walking 2 and striking out 2. John McMillon hit at DH and also came in to pitch, going 2.1 innings and allowing 3 hits, 2 runs, both earned, walking 3 and striking out 3. Jacob Patterson and Caleb Freeman pitched the final 2.2 frames, not allowing any runs and allowing just 1 walk and striking out 2.

The problem for the Texas Tech offense is that they were going up against their Saturday starter, who is really good, Nick Lodolo, and Lodolo allowed just 4 hits all night. Hunter Hargrove had a sacrifice fly to center to score Grant Little and that was the extent of the offense.

The other key here is that Texas Tech got out of a lot of jams. TCU left 12 on base.

I was nervous as heck about this game. TCU won the firs game and with Gingery pitching, it pretty much became a must-win sort of situation to have a chance at the conference title. Gingery pitched 3 innings, allowing 2 runs, 1 earned, 2 walks and 5 strikeouts, but the game was called postponed to weather after the third inning and I thought there was no way that Texas Tech would have the bullpen to keep pace. Well, I was wrong. Caleb Killian ended up with the start on Sunday afternoon at 11:00 am and went 3.1 innings, allowing 2 runs, walking 2 and striking out 1, but earned the win to go to 4-0 on the year. Parker Mushinski was lights out in the final 2.2 frames, allowing 2 hits, 1 walk and 5 strikeouts.

Texas Tech was down 2-1 to start the game again, the only run coming off of a wild pitch, but when they started things back in the 4th inning, Michael Berglund scored on a wild pitch to tie things up. TCU then took the lead in the 5th, scoring 2 runs. Texas Tech would get one back on a John McMillon home run to deep center and in the 6th inning, down a run, Brian Klein would send a 3-run homer to right field.

Not expecting this result.