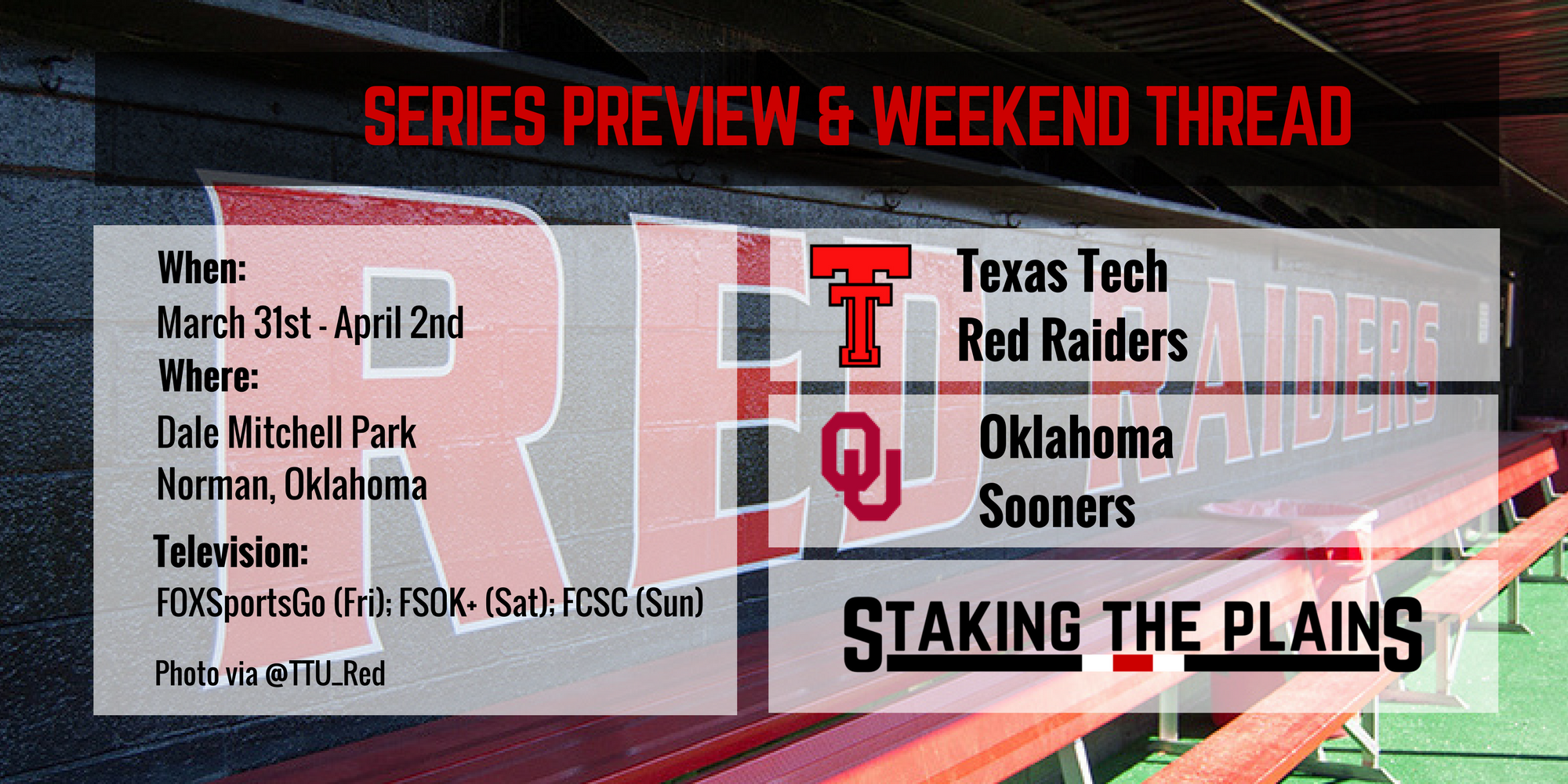 The Red Raiders hit the road to take on the Sooners in Norman.

This is going to be an interesting series for Texas Tech. The Sooners have greatly improved from last year, but they’ll be without their Friday and Sunday starting pitchers, Jake Irvin and Austin Hansen, as well as cleanup hitter Austin O’Brien. Texas Tech head coach Tim Tadlock returns to Norman, where he was an assistant coach with the Sooners before arriving at Texas Tech.

The Sooners are ridiculously offensive (I mean that in the baseball way) and they’ve got some really good pitching numbers, but I don’t know that they’ve played an incredibly tough schedule. They swept Central Connecticut State, Buffalo, Kennesaw State and also had a tournament in Norman where they beat up on Villa nova, N. Illinois and Boston College as well as a two-game series with Grambling State. I don’t know how good all of those teams are from the East Coast, but generally speaking the better teams are on the West Coast, the South and Texas.

The LAJ previews the series and most importantly, updates up the injuries to OF Ryan Long and OF Tanner Gardner:

Texas Tech had two significant injuries against Texas Southern with both Gardner and Long getting hurt while sliding. Gardner was hurt Tuesday sliding into first base, spraining his ankle, while Long separated his shoulder. Both player could play this weekend, but Tadlock did say Gardner would be out at least for Friday.

“We will see when you get to Friday (about Long), but I just talked to him and he said he is fine,” Tadlock said. “Gardner has a sprain and it is not even a bad one. He is walking on it already and he should be ready and fine. I don’t know if he will play Friday, but he is an old soccer player and he has had a sprained ankle every year since he has been here. He recovers from them a little fast than most people and guys that can hit like him can hit on one leg, much less two.”

RRS’s Will McKay previews the series and confirms my thoughts above (I promise, I didn’t read this before making my comments about the Sooners’ schedule):

The Sooners have been quietly off to a great start this season, sitting at 23-5 on the year going into the weekend matchup with the Red Raiders.

Oklahoma has interestingly played 19 home games already this season, however, a huge number for any team this early on in the season. Their most impressive wins so far have come against Baylor, as OU took two of three from the Bears.

Their early season surge has taken place both at the plate and on the dish, as the Sooners are leading the Big 12 in nearly every batting category to go along with leading the conference in staff ERA and lowest opponent batting average.

Some of that might have to do with the fact that the Sooners have played one of the weakest non-con schedules in the conference to begin the year too, but that doesn’t take away from the fact that they’re definitely a good team.

The big news from this game is what didn’t happen, which is that Davis Martin was held out of this game as he had some slight tendinitis and they kept him on the shelf as a precaution. I should have been tipped off when John Henry Gonzalez, who ended up starting, didn’t start his normal mid-week game. Gonzalez pitched well given the circumstances, he went 4 innings, giving up 3 runs, walking 4 and striking out none. Jacob Patterson pitched 3 1-hit innings, walking just 1 and striking out 4. Caleb Killian pitched the 9th and wasn’t very good, as he gave up a hit and 3 runs to go along with 2 walks.

The offense couldn’t muster much of anything, as they only had 4 hits all game. Hunter Hargrove, 1 for 3, singled home Grant Little in the first inning and Cody Farhat, 1 for 3, singled home Michael Davis. It should also be noted that Tanner Gardner and Ryan Long, the normal center fielder and right fielder, two big leaders of this team, didn’t play tonight. Gardner had an ankle situation in the last midweek game and Long had his shoulder pop out during the game and apparently it is still sore. We’ll see if they’re back for Saturday.

Steven Gingery pitched a fantastic 6 innings, earning his 6th win of the year (6-0), allowing just 4 hits, walking 1 and striking out 10, but it took 101 pitches. Gingery was actually pretty lucky to get the win because in the 7th, Jose Quezada didn’t record an out, but allowed a run. Parker Mushinski didn’t record an out, but allowed a run. That sequece was a single allowed by Quezada and then Mushinski came in, hit two batters and was pulled. Then, John McMillon came in with the bases loaded adn walked in a batter and then got OU to hit into a double play, which advanced a run before getting the last batter to fly out. McMillon allowed a home run in the 8th and Dylan Dusek allowed a couple of hits and a run in the 9th.

Luckily, the offense showed up today. Ryan Long was back in at the top of the lineup, but Tanner Gardner is still on the mend as Cody Farhat started, but that was completely irrelevant because Farhat went 4-5 with 3 RBI, including a run scored in the first inning on a failed pickoff attempt.

Michael Berglund went 2-5, Grant Little went 2 for 4 with an RBI and 2 runs scored. Orlando Garcia went 2 for 5 with a run and an RBI. Zach Rheams blasted a home run, his first of the year and a much needed home run from the designated hitter.

The final game has been moved up to 11:00 am to hopefully avoid the impending storms rolling through.

Blah. The Sooners hit a walk-off home run off of Jose Quezada in the 9th inning to win this game and the series. Ryan Shetter had a rough first inning giving up 3 runs, but settled down to give Texas Tech 4 innings before jacob Patterson pitched 1.1 innings, allowing 1 hit and 1 run before Quezada entered in the 6th inning and pitched really well, but his only hit allowed was the game-winning home run. Quezada drops to 3-2 on the year.

The offense managed 8 hits, but could only drive in 4 runs. It seemed like they had plenty of opportunities to drive in additional runs and ended up scoring 1 in the 3rd and 3 more in the 4th inning to take the lead, but just couldn’t keep the lead.