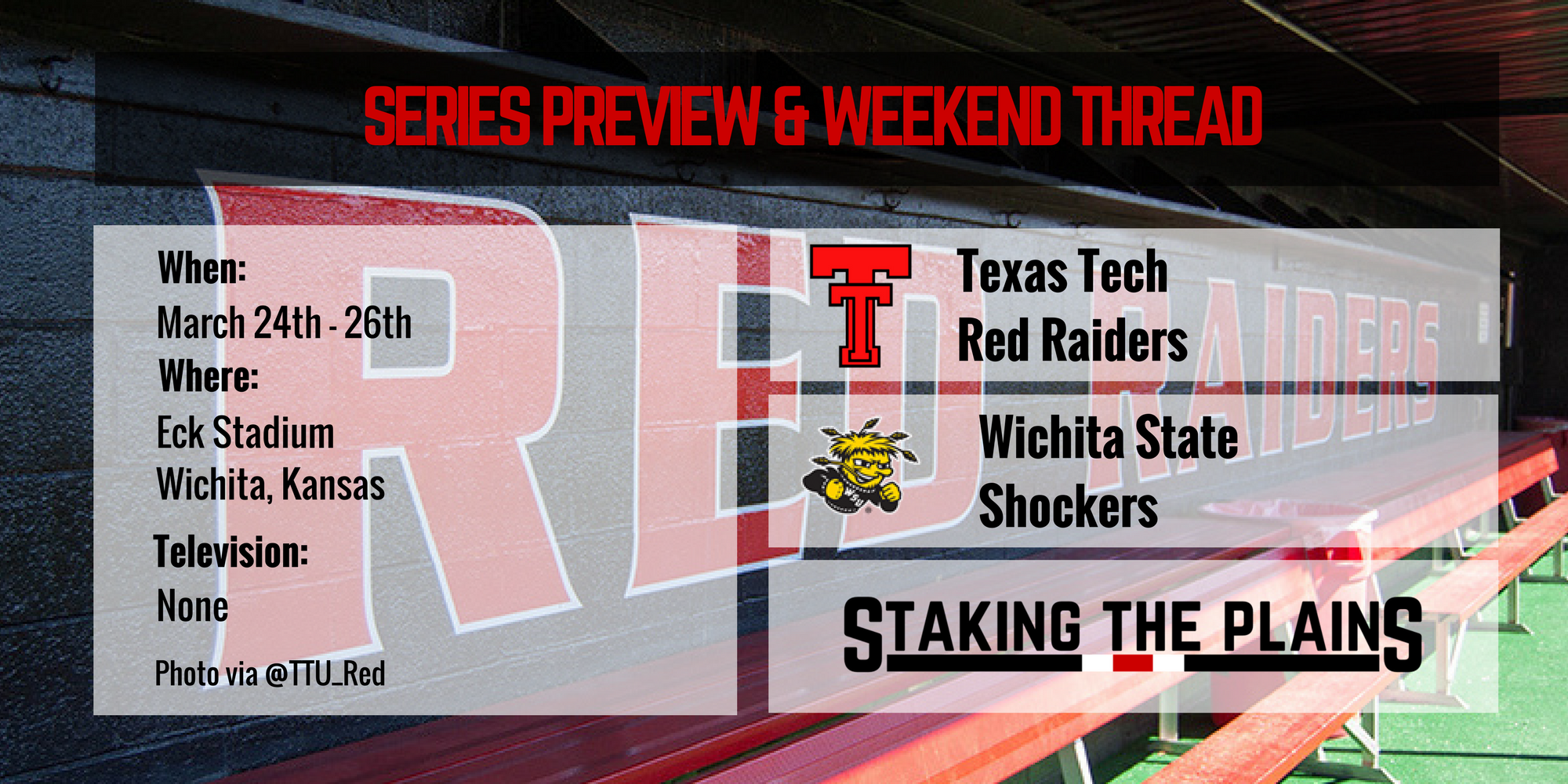 The Red Raiders travel to Wichita to take on the storied Shockers of Wichita State. I had really forgotten that this series was on the schedule and just presumed that Texas Tech would be on that Big 12 conference grind from here on out, but here we are. Wichita State is similar to Texas in that they aren’t a terrific hitting team, but they do pitch fairly well, but they just don’t hit. Oh, and they’ll strike some guys out and they don’t walk a ton of batters. Texas Tech will need to be patient at the plate, but I don’t think that’s a huge problem.

“Their team has some sophomores that are pretty good and I know two or three of the guys we will see on the mound are from Texas and it should be a good series,” Texas Tech coach Tim Tadlock said. “I know they went up to Norman (Oklahoma) and won a 4-2 game (over the Sooners) and it is great opportunity for us to go up there.

“It is a little bit like going to Austin — our guys just don’t know it. You are going to have fans all around the stadium and they are great baseball fans.”

RRS’s Will McKay takes a look at the Shockers who are havng a tough go at it recently:

After getting out to a great 7-0 start, Wichita State has run into some really tough times, losing 10 of their last 14 games in that stretch. That included a weekend in Baton Rouge where the Tigers got after the Shockers, particularly at the plate by hammering the WSU starting rotation.

Simply put: Wichita State has had a very hard time putting up runs against good pitchers while also getting hit on hard by good lineups. They’ve done fine against some other mid-major types, and they even stole one against Oklahoma 4-2, but LSU and Louisiana Tech gave it to WSU.

Texas Tech jumped out to a 3 run lead to start the first inning and then tacked on another run in the 4th and 6 more in the fifth before Wichita State even got on the board. The offense hammered out 14 hits and Martin Davis wins his 4th game of the year. Martin (4-1) went 6 innings giving up 3 hits a run, 2 walks and striking out 5. Ty Harpenau pitched 2 innings and gave up the other 4 runs, walking 3 and striking out 2. Erikson Lanning pitched the final frame facing just 3 batters.

Steven Ginery moves to 5-0 on the year behind 6 innings of work, allowing just 3 hits, 2 walks and striking out 8 on just 88 pitches for the day. That’s pretty danged efficient. Jose Quezada pitched an inning in relief, giving up 2 hits and a run, while Parker Mushinski earned his first save of the year going 2 innings and allowing just a hit and striking out 3.

The offense was initially powered by John McMillion’s third inning home run, while Tanner Gardner went 2 for 3 with 2 runs scored and Hunter Hargrove, batting behind Gardner, went 2 for 4 with 2 RBI.

I don’t even know what to say at this point. Texas Tech is 22-4 for the year and won their last 8 games, the last loss was that strange mid-week loss to UT-Arlington.

Ryan Shetter got the start, going 4.2 innings, allowing 2 hits, 1 run, walking 4 and striking out 5. A little rough, but I’ll take that from the third starter on an off-day. Jacob Patterson earned the win to go 4-0 on the year, going 2.1 innings and allowing just 1 hit and walking 1. Caleb Kilian earned his first save of the year, going the final 2 innings without a hit or walking and striking out 1.

Brian Klein got the start at 2nd, giving Michael Davis a day off, and promptly went 1 for 2 with an RBI. DH / relief pitcher John McMillon went 2-4 with an RBI, one of those hits was a double scoring Grant Litttle. Hunter Hargrove went 2 for 3 with a run scored, that run came off of a wild pitch in the 6th inning.

This week, Texas Tech hosts Texas Southern for a 2-game series on Tuesday and Wednesday and then travels to Norman to take on the Sooners for the weekend series.