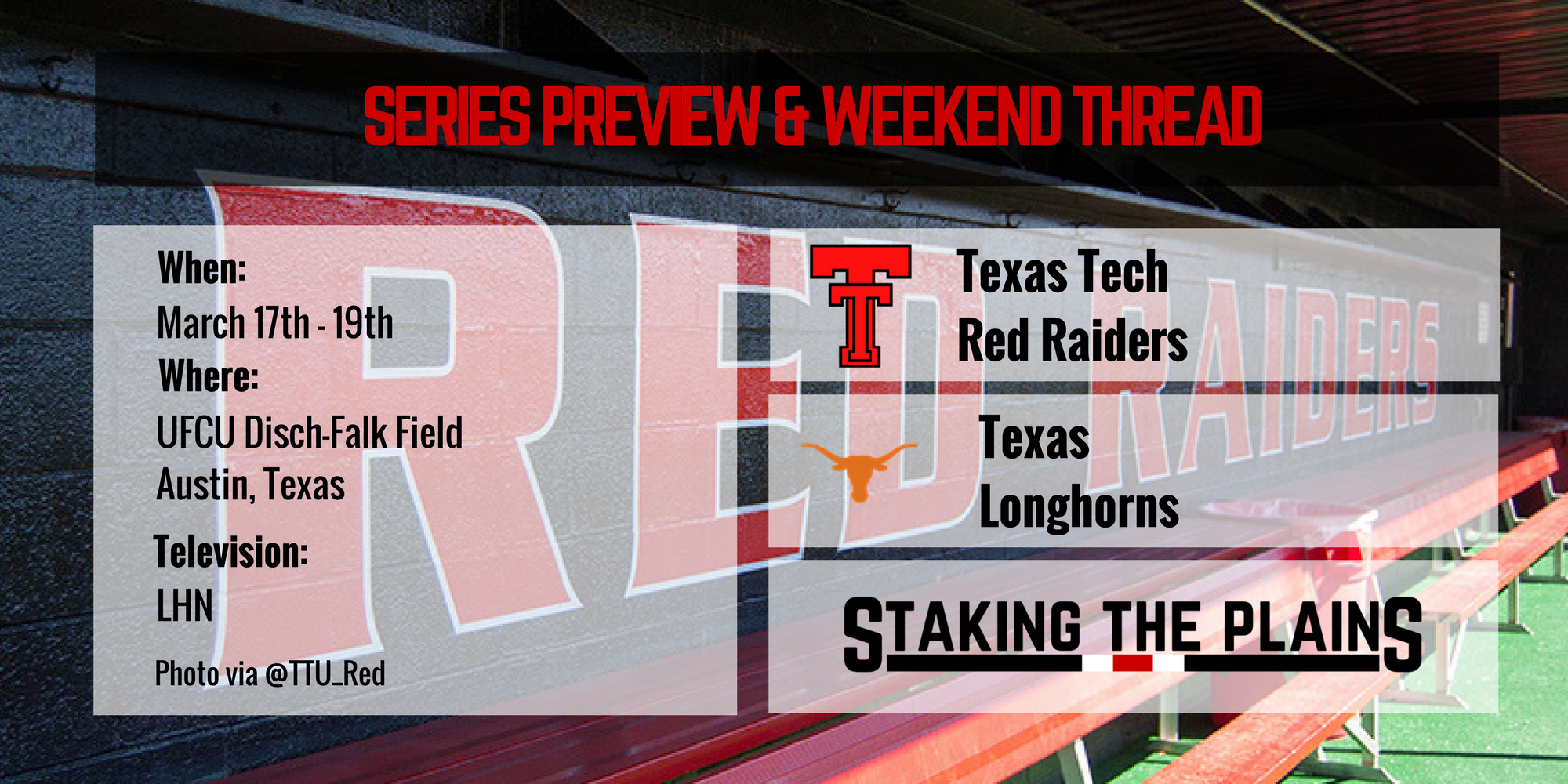 The Red Raiders travel to Austin to open Big 12 play against the Longhorns.

This is a pretty big series. Pretty big series to start Big 12 play for both teams. The Longhorns are coming off of an emotional win over Texas A&M as well as a dominating performance against UCLA, where the Bruins were swept in Austin. That’s pretty impressive.

The Longhorns are generally doing this off of a stellar pitching performance. The offense is definitely lacking a bit for Texas, but they can shut some folks out. Still, Texas Tech is pretty good too, a better offensive team, but they’ll need to bust out of any slumps that they’re in after being held to just 2 hits against UT-Arlington. This should be a ton of fun.

LAJ’s Carlos Silva, Jr. looks at the weekend series and notes that head coach Tim Tadlock needs everyone to slow down a bit:

“Yeah, it’s a good club. (Nolan) Kingham, (Morgan) Cooper, (Blair) Henley, those are three guys in the rotation,” Texas Tech head coach Tim Tadlock said. “They’ll be a handful. They’ll be a challenge for our guys. I think it’s always a challenge playing in that environment, kind of like (Arlington) from a standpoint of just getting guys to slow things down and do what they do. Looking forward to the weekend, at the same time, we need to have a couple good practices before we get there.”

The Red Raiders are looking to jump start a sputtering lineup that has totaled 13 hits in its past three contests — going 1-2 in that span. In the two losses to UT-Arlington and UTSA, Texas Tech totaled four hits.

RRS’s Will Mckay takes a look at the dominant pitching from UT:

Now, with former Tulane coach David Pierce at the helm in his first year at the head of the Longhorn baseball program, things have largely looked the same so far in 2017.

Texas has been fantastic on the mound, holding a team ERA of 2.54 that’s second best in the Big 12 heading into conference play with sophomore righty Nolan Kingham off to arguably the best start to the season of any pitcher in the league. The Horns have impressively limited opponents to just a .205 batting average and given up just six home runs on the year. It’s another loaded pitching staff from top to bottom.

Man, watch those highlights and tell me that you’ve not pumped up! Davis Martin came back and pitched a stellar game, going 6.1 innins, allowing just 2 hits, 1 run, walking 4 and striking out 6. Those two hits were the only two hits of the game, one of those hits being a home run in the third inning to score UT’s only run.

Parker Mushinski pitched terrifically in his 2.1 innings, walking 1 and striking out 4, but he got into some trouble in the 9th with 2 outs, as Mushinski walked a batter, then stole a base and advanced to third on a throwing error by freshman catcher Michael Berglund. In comes freshman pitcher John McMillon, who promptly walks a batter to put runners on the corner. What you’ll see in those highlights is McMillon getting the strikeout on that last pitch, the batter just watching it fly by.

Texas Tech scored on a Michael Davis home run in the third and a Michael Berglund double in the 7th inning scored Hunter Hargrove. Berglund was 2-4 on the day and the team only managed 7 hits on the day. Interesting note, Ryan Long led off for the game and don’t look now, but Connor Beck is starting ot get a lot more time in right field.

I hope you’re not tired of 2-1 wins because you’ve got your second one of the series as Texas Tech won the series against a very hot Texas team on Saturday and a chance to sweep on Sunday. Steven Gingery, 4-0, pitched 6 solid frames, giving up 2 hits, 1 run 2 walks, and 5 strikeouts. Gingery’s run wasn’t earned, it was on a Gingery throwing error. Steve Patterson was electric in relief, going 1.2 innings, allowing 2 hits, 1 walk and 4 strikeouts, while Jose Quezada earned his second save of the year, going 1.1 innings, giving up no hits, no walks and striking out 4.

Michael Davis scored on a Josh Jung single to right field and Jung scored on a Michael Berglund single to center field. That’s two freshman coming up huge in big moments for this team. Jung was 2 for 3 on the day, scoring that run and with an RBI. Gardner was 2 for 4, Ryan Long was 1 for 3 with an amazing catch in center field.

And make sure and watch the highlights. Patterson striking out 3 straight. That rundown by Berglund was huge as was some of those defensive plays by Davis. And again, that catch by Long was huge.

No exclamation point needed. A collective effort and terrific outing by the entire team. Texas Tech and UT traded runs and were tied through the third inning and when Texas Tech batted in the 4th inning, they drove in 4 runs on 4 hits with 2 outs. Texas Tech remained in control the rest of the way and tacked on a insurance run in the 8th inning.

A couple of notes, freshman catcher Michael Berglund caught his third straight game. Freshman John McMillion, typically a relief pitcher, started at DH and went 2 for 5, scoring 2 runs and with an RBI, that RBI was a home run and that insurance run in the 8th. Dylan Dusek was the secret weapon for the game, he earned the save, but he pitched 3 innings with just 29 pitches, 20 of them strikes, facing 9 batters and retiring all 9.

Ryan Shetter got the start and went 4 innings, not his best day, but he gave Texas Tech 4 innings, allowing 3 runs, walking 5 and striking out 3. Erikson Lanning came in for relief and didn’t record an out and walked a batter and Tadlock would have none of that and in came Parker Mushinski where he got Texas Tech through the 5th. Caleb Kilian pitched the 6th, a bit shaky, as he gave up 2 runs, both earned, while the aforementioned Dusek finished the game off.

Texas Tech rattled off 15 hits for the day. Hunter Hargrove was 3 for 4 with 3 RBI, including a double that scored 2. At the top of the lineup, Ryan Long continued to get on base, going 2 for 5 and scoring 2 runs. Josh Jung went 3 for 4 with 2 runs scored. Tanner Gardner went 2 for 5 with an RBI and a run scored. Orlando Garcia went 2 for 5 with a home run.