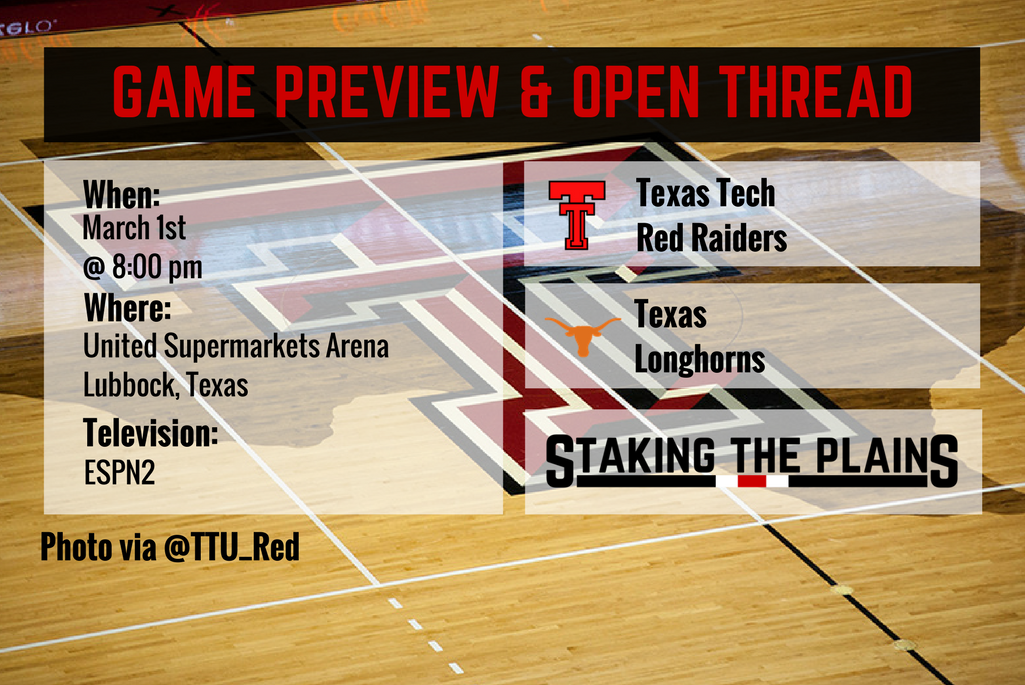 1. KenPom has Texas as the 74th best team, 177th in AdjO and 25th in AdjD. Texas Tech is still 35th overall, 35th in AdjO and 70th in AdjD (this is as of Sunday morning when I have time to get the preview morning, so it could change slightly between now and game time). Despite the decent KenPom rating, Texas Tech is definitely on the outside looking in.

2. The Longhorns are on a current 5 game losing streak, losing to Oklahoma State, Oklahoma, Kansas State, West Virginia and Kansas. Of course, one of Texas’ conference wins is against Texas Tech, a 4 point win back on February 1st. I can’t really figure Texas out other than they are a team that doesn’t have a real point guard. They are young from the standpoint that they have young players and I think Allen is going to be a one-and-done guy because he’s that good, but he could use another year in college. Shaka just doesn’t have the pieces there yet, but I’m guessing he gets there pretty quick.

3. Texas Tech is on their own rough stretch, losing their past three games, two of them in overtime against West Virginia and Iowa State and seemingly running out of gas against Oklahoma State. They just didn’t have the juice to keep pace with the Cowboys, but Texas isn’t a great offensive team. The Red Raiders need to be who they are and they need to get Smith back inside, rebounding and creating havoc in the paint and not outside. In the NBA or professionally, Smith will need to figure out that outside shot, but he’ll make the NBA based on his defensive ability and versatility.

4. This is the last game for this group of seniors. I think about all of the coaches that Aaron Ross has had and how he’s stuck through this entire thing and that says a ton about the person he is. Recruited by Billy Gillispie, sticking around for Chris Walker and Tubby Smith and Chris Beard. That man wanted to be a Red Raider and he didn’t have to be. He had opportunities to leave. Plus all of the injuries that he’s worked back from is pretty special. Ross’ outside shot has left him this year, but I tip my cap to him and thank him for his contributions.

“I think the common trait of all five guys is unselfishness,” Texas Tech head coach Chris Beard said. “Each of them is playing a different role than they have played in the past. Each of them has been asked to do different things on and off the floor. Through good times and through times of struggle, they’ve really maintained to be the same kind of people and the same kind of leaders. All five are unselfish people. To me, they are guys that are going to be successful after basketball. A couple of them will have a chance to play after basketball for money (professionally), but I have no doubt that when you look them up in five, 10 or 15 years that all five are going to be successful people. They are going to be good fathers and good husbands, and a lot of it comes from traits that they are unselfish people by nature.”