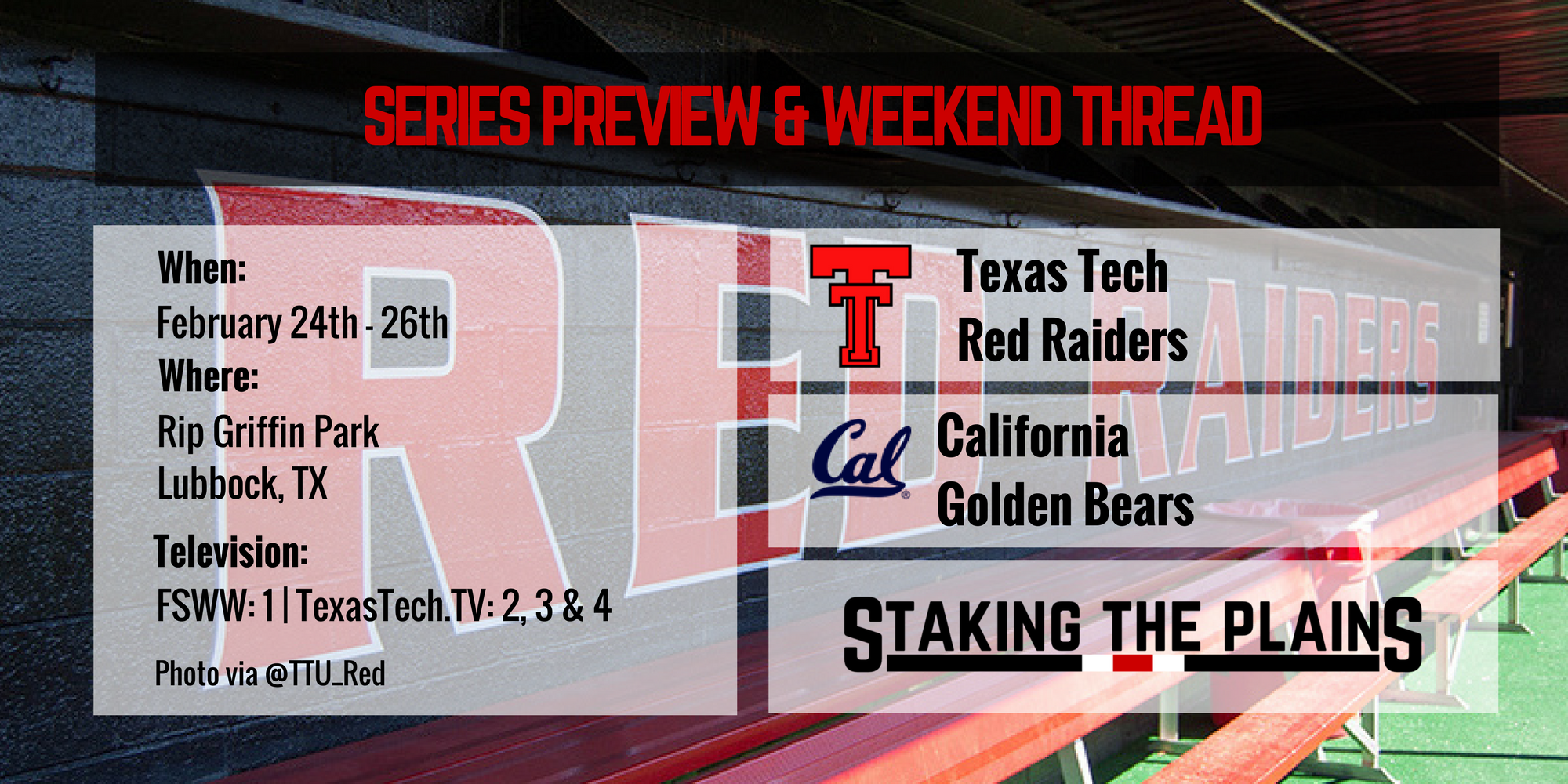 The Red Raiders host the California Golden Bears for a four game series.

There’s no articles about Texas Tech as of the time I’m writing this (which is 4:00 am on Friday morning) from the Texas Tech side of things, but I did find this DailyCal article about the match-up:

When the Cal baseball team opened the season last weekend, the expectations weren’t very high. The inexperienced Bears were coming off a year in which they not only lost 11 graduating seniors, but also seven players to the MLB draft. But this didn’t stop them from being competitive, as they were able to win an opening season series against an always tough Cal Poly.

This weekend, the Bears will have a far larger test on their hands when they travel east to compete against No.11 Texas Tech. The Red Raiders will enter this game with tons of confidence, as they are coming off a game Tuesday in which they demolished New Mexico State in a 16-1 blowout.

“They were the best team we played last year and they’re very good this year,” said Cal head coach David Esquer. “So we need to continue working on our defense and help out our pitching,”

Another terrific outing from starter Davis Martin going 7 innings, allowing just 7 hits, 1 run, 1 walk and striking out 3. Jacob Patterson gets the win (1-0) and pitched the final two frames, allowing 2 hits, 1 run, walking none and striking out 2. Just to update you, Patterson is home-grown. He’s a junior from Berkner who played both as a freshman (4.70 ERA) and a sophomore (3.77 ERA) and is just working his way up the system. He seems to be a guy that Tadlock trusts.

Ryan Long had the only RBI of the game, a single in the 2nd inning scoring Hunter Hargrove. The offense essentially got the lead because of pressure. Orlando Garcia laid down a beautiful bunt that ended up scoring Michael Bergland and Connor Beck after the pitcher had a throwing error that went into left field. A couple of things from the highlights: 1) Josh Jung has a cannon at third base; 2) That last pitch from Patterson was filthy; 3) The called strike three for Davis with the bases loaded was so good. Paint the corner.

Ryan Long provided enough offense to win the game, hitting a three-run home run in the 6th inning and going 2 for 3 for the day. Zach Rheams was 1 for 3 on the day and singled and drove in Hunter Hargrove who was 2 for 4 with a run scored.

That’ll do it. Texas Tech’s first walk-off win of the year was an 11 inning affair where three newcomers played big parts in the game winning hit. In the bottom of the 11th inning, Ryan Long singled and Connor Beck bunted to advance to second. Orlando Garcia is intentionally walked and Tadlock sends in Grant Little in to pinch run for Long. Michael Berglund singled through the right side of the field to score Little. That’s a freshman with the game-winning hit, Little pinch running for a senior and Beck getting a bunt down to advance Long. You think Tadlock will give these guys the opportunity to be trusted?

Offensively, Zach Rheams hammered his first home run to right field and was 1 for 4 on the day. Ryan Long was 2 for 4 as was Connor Beck. Hunter Hargrove was 1 for 3 with 2 walks.

Erickson Lannin went 5 solid innings earning the win, allowing 5 hits, 2 runs, walking 3 and striking out 2. That’s a much better showing than last weekend. If this is the fourth starter, then I think Texas Tech is doing pretty good. Freshman Jake McDonald pitched 2 innings without allowing a hit and striking out 1. Freshman Caleb Killian pitched the 8th inning, allowing just 1 hit, walking 1 and striking out 2. And the 9th inning belonged to Dylan Dusek, who has made his return from Tommy John surgery, over a year on the shelf, he allowed just 1 hit and struck out 1.

The offensive star of the game was Hunter Hargrove, who I can alomost guarantee will be hit by a pitch for loving to play the game and getting excited when he does good stuff, was 3 for 5 with a grand slam and 2 additional RBI. Freshman Grant Little was 3 for 3 on the day. Michael Davis was 2 for 5 with a double and 2 RBI. Tanner Gardner broke out of his slump a bit going 2 for 4 with an RBI. Grant Little was 3 for 3 with 4 runs scored.