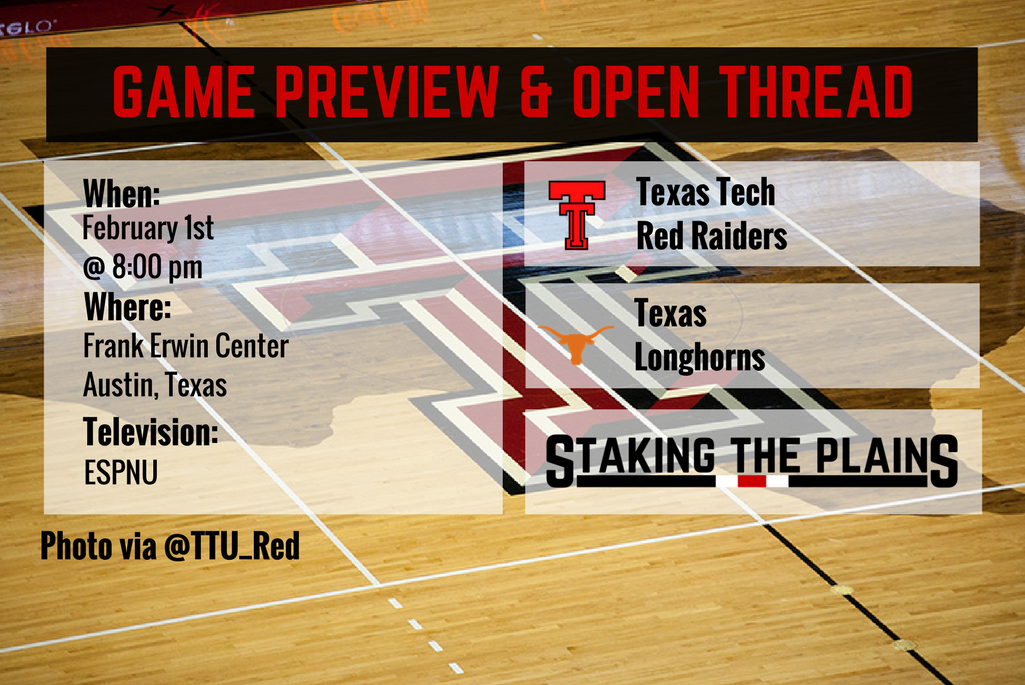 The Red Raiders need to secure a win on the road, the Longhorns are up next.

1. KenPom says that the Longhorns are 68th overall, 185th in AdjO and 22nd in AdjD. Despite Texas Tech’s win against LSU, which was probably expected, Texas Tech is 41st overall, 34th in AdjO and 74th in AdjD.

2. Texas Tech has very much been lacking a true point guard that controls the game. The always dangerous Isaiah Taylor left early and I don’t think anyone could have know how important he was to the Longhorns’ success last year. There is no real controlling presence on the floor for Texas and very few players that have a distinct advantage in assists to turnovers and that’s a problem Jones and Roach.

3. Allen really is a fantastic player and to nearly average a double-double as a true freshman is pretty fantastic, all the while shooting 55% from the floor and blocking one-and-a-half shots a game. That’s good. He needs another year, at least, especially learning how to improve on his 60% from the free throw line. He’d be even more dangerous if he could hit his foul shots, but there’s a lot to like here. The problem is that Allen really is the best shooting player and no other player is really picking up the pieces to help. As a team, Texas shoots only 44% from the floor and only 30% from the three-point line.

4. Texas Tech ended up beating LSU without their leading scorer in Keenan Evans. Zach Smith, Aaron Ross, Anthony Livingston and Niem Stevenson all stepped up from a scoring standpoint. I’d also add that it was encouraging that the team overall only had 10 turnovers when one of their primary ball-handlers was out, and there was also 17 assists to boot, led by Gray (although he also had 4 turnovers). Evans is currently day-to-day, but he’s an important piece to the puzzle.

“In college basketball, rivalries are great,” Texas Tech head coach Chris Beard said. “In the history of Texas and Texas Tech, we’ve got to do a better job at making it a rivalry. We have to get to the point where we are competing in games against everyone in the Big 12. I understand that it’s a big game for the fans. That’s what makes college basketball cool and the Big 12 special. You have two D1 schools in the best conference in the country, in state and we recruit a lot of the same players so absolutely it’s a special game. To me as a competitor and as a coach, it’s not different. I understand what goes into games like this. I embrace it, and I don’t hide from it because again it’s what makes college sports cool.”