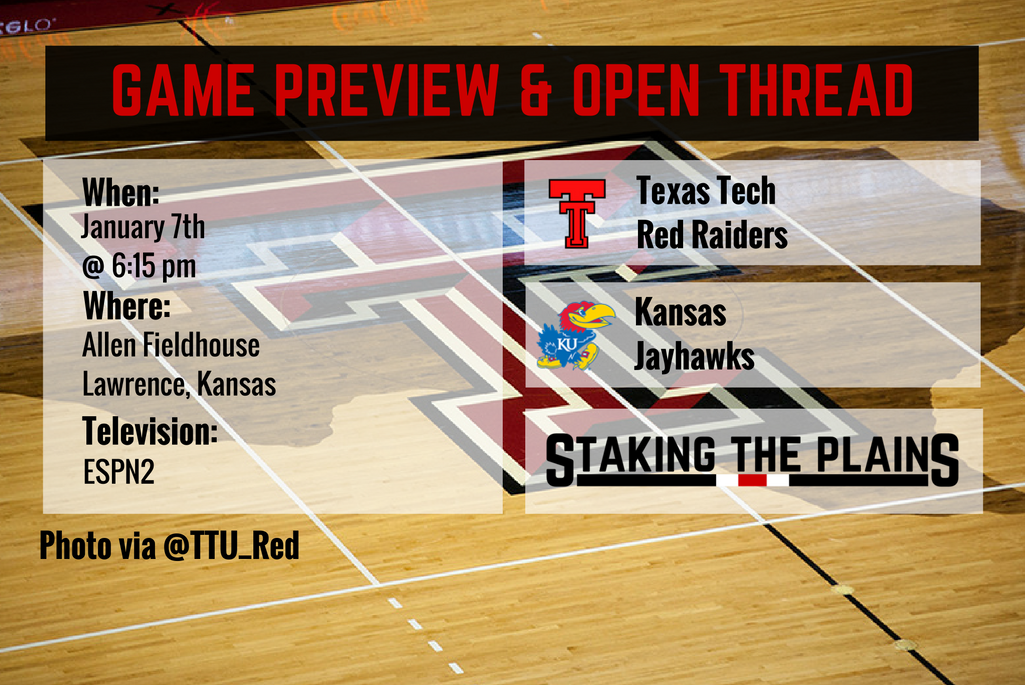 1. KenPom has Kansas as the #7 team in the nation, 5th in AdjO and 25th in AdjD. Texas Tech is up to 28th overall, 29th in AdjO and 42nd in AdjD. Fun fact: West Virginia jumped up to 2nd overall after losing to Texas Tech, which I find odd and interesting at the same time. The other fun fact is that Kansas is the third best team according to KenPom, behind WVU and Baylor. Iowa State is 26th overall.

3. Jackson is a terrific player for Kansas, a shooting guard / small forward that has court awareness, the ability to play really well offensively and he’s better than average ball-handler. He’s going to be a load and I’m keenly interested to see how Texas Tech matches up with him. Beard could play Gray or Smith against Jackson. I really want Gray to stay out of foul trouble because I think his big body and presence will be necessary. I’d also guess that Stevenson will get plenty of time too covering Mykhailiuk, Stevenson and Gray will need guard that three-point line.

5. Head coach Bill Self will likely look to pressure Thomas and Evans because Kansas is certainly focused on the defense and improving the defensive pressure:

Self cited a lack of “havoc” being created by guards Frank Mason and Devonte’ Graham — whether it comes through steals, deflections or forced poor possessions — as the main culprit to the team’s defensive struggles.

“I think if you cut the head off, people say that the body will follow,” Self said. “So I think most of the responsibility falls on Devonte’ and Frank more than anybody else, because I think they can set the tone for everything.”

And alternatively, Chris Beard understands how the low turnover number against West Virginia was key to the win:

“Low turnovers were so important against West Virginia, and it’s much of the same with a very talented Kansas game,” Texas Tech head coach Chris Beard said. “The best thing they do on offense is their transition game with their great players and their rebounding. We have to really control the game to do that, and low turnovers are always very important to us.”