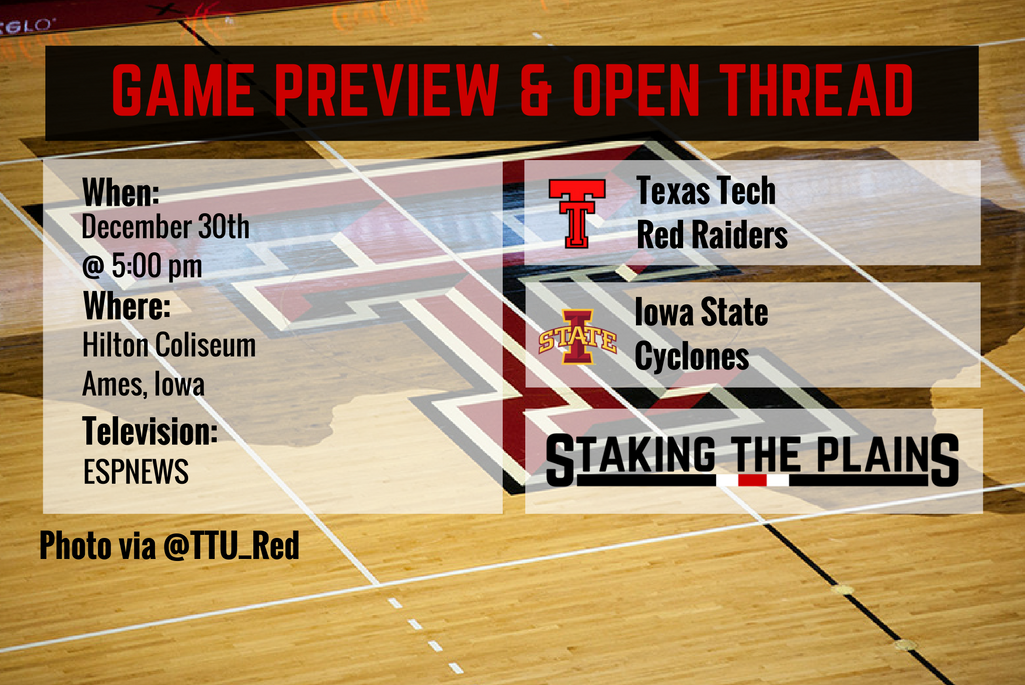 The Red Raiders travel to Ames for the first conference game of the year, taking on the Cyclones of Iowa State.

1. KenPom says that these two teams are pretty evenly matched. Iowa state is the 30th best team in the nation, ranking 46th in AdjO and 24th in AdjD this year, while Texas Tech is 27th overall, 26th in AdjO and 40th in AdjD. I mentioned after Texas Tech beat Longwood that I thought the defense suffered and previously, Texas Tech’s AdjD was right in line with the offense and that’s exactly what happened. Texas Tech will have to do a better job of limiting opponents because that’s going to be significant part of the equation in winning some Big 12 games.

2. Iowa State has lost to three good teams, at home to Gonzaga by 2, who is a top 10 team, to Cincinnati by 1 at home and a 14 point loss at Iowa. The best win on the ledger is probably beating Miami by double-digits. They were ranked before losing to Iowa, so the general perception is that this is a top 25 team and that’s probably based off of prior history more than anything else and that’s well-deserved.

3. Iowa State has an interesting team, they aren’t as elite offensively as they have been in the past, ranking 39th in points per possession at 1.105, and the problem for Iowa State is probably that they are only making 64% of their free throws and they just aren’t making a ton of shots, only 62% from the floor or a ton of three-point shots, only 37%. For comparison purposes, Texas Tech is scoring 1.189 points per possession, while making 53% of their baskets, 40% of three-point shots and 75% of free throws.

4. Iowa State is very balanced though, four players average in double-figures and those four players really are terrific. I love watching Morris play the point guard spot and Mitrou-Long and Thomas are your spot-up shooters from the three-point line, while Burton, Young and Bowie give you some good production from the inside.

5. Iowa State has always been a haven for transfers and high profile JUCO guys, much like Texas Tech has been this year. Iow State just did it for much longer. Merrill Holden is a transfer from Louisiana Tech and averaged 8 points and 5 rebounds last year. Darrell Bowie played for Northern Illinois and averaged 10 points and 5 boards a game. Donovan Jackson played at Iowa Western C.C. and averaged 15 points in the JUCO ranks. The transfer game can work out very well, but it can also be problematic in that if the players that you pick up don’t produce, then you don’t really have much time to give you consistency. See Gio McLean for Texas Tech.