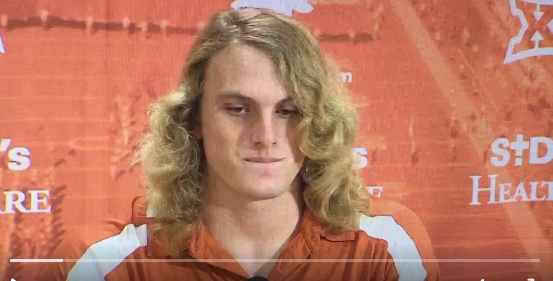 Hager on the Texas D’s mission this week: “Injure that quarterback.”

Reporter: “Against Kansas State you said the defensive mentality was to ‘kill everything’, what’s the mentality of this game?” pic.twitter.com/RGx4sEFBmz

Texas has released a statement with Breckyn Hager apologizing for his “injure that quarterback” comments. pic.twitter.com/VBkq1TtJDE

I mean, Texas would never try to injure a quarterback:

This was the hit that @qdiggs6 made on Mahomes two years ago. Diggs got in trouble for comments afterward. https://t.co/PVWPrxB22Y

Texas caught a break when this targeting call was missed by the refs. https://t.co/ZIlNAfO4AP pic.twitter.com/hHcJPQz8Oi

* I had totally forgotten how Brent pulls back and brings up the fact that this was targeting.