Your statistical profiles of the Sooners and the Red Raiders.

Oklahoma had a rough go at it to start the year, but Houston and Ohio State are very good teams, Ohio state probably is a great team. So there were some rough patches for the offense, but it appears that Lincoln Riley and Baker Mayfield have done an excellent job of righting the ship.

The running game is significantly better than what Texas Tech is running out there and they’re on level with Texas Tech in terms of the passing stats. They convert third downs at a slightly lower rate, but they’ve also played tougher non-conference competition. Offensively speaking, these are very similar teams, but the ground game for Oklahoma stands out.

Defensively, Oklahoma does struggle against the pass, but they’ve been nails against the run and better than Texas Tech on their conversion rates against opposing offenses, although I would have figured they would have had a better third down conversion rate. I’d guess that the difference is that passing teams are still able to convert passes on third downs against the Sooners, but those teams generally had ground games that couldn’t be ignored. 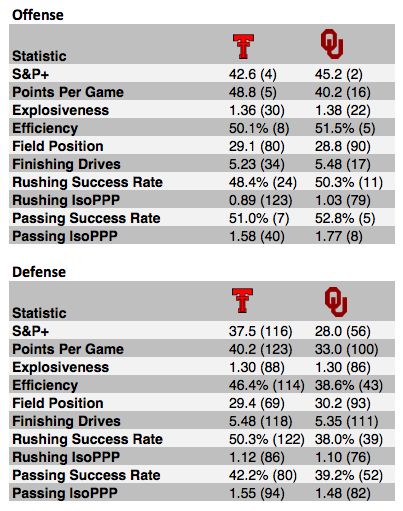 The advanced stats tell us much of the same thing in regards to the offense, namely that the Sooners do have a better offense, although there’s not a big distinction between them. The Sooner ground game is better and I’d guess that Joe Mixon and Abdul Adams will see plenty of work against Texas Tech.

Defensively, despite the Sooners’ struggles are significantly better than Texas Tech. The points per game isn’t a deal-breaker, but just overall, the Sooners put up better numbers, especially stopping the run. OU does tend to give up big plays in the air, but that’s about it.

Some folks were thinking that the Texas Tech defense is playing better than last year and although we don’t have a full season of stats, it is ever so slightly better. Last year, the defense was 121st in S&P+ and this year it is 116th. That’s not a huge figure. What is down is the overall havoc rate, 91st last year and 109th this year. This defense is giving up lots of yards still, but they are not making splash plays.