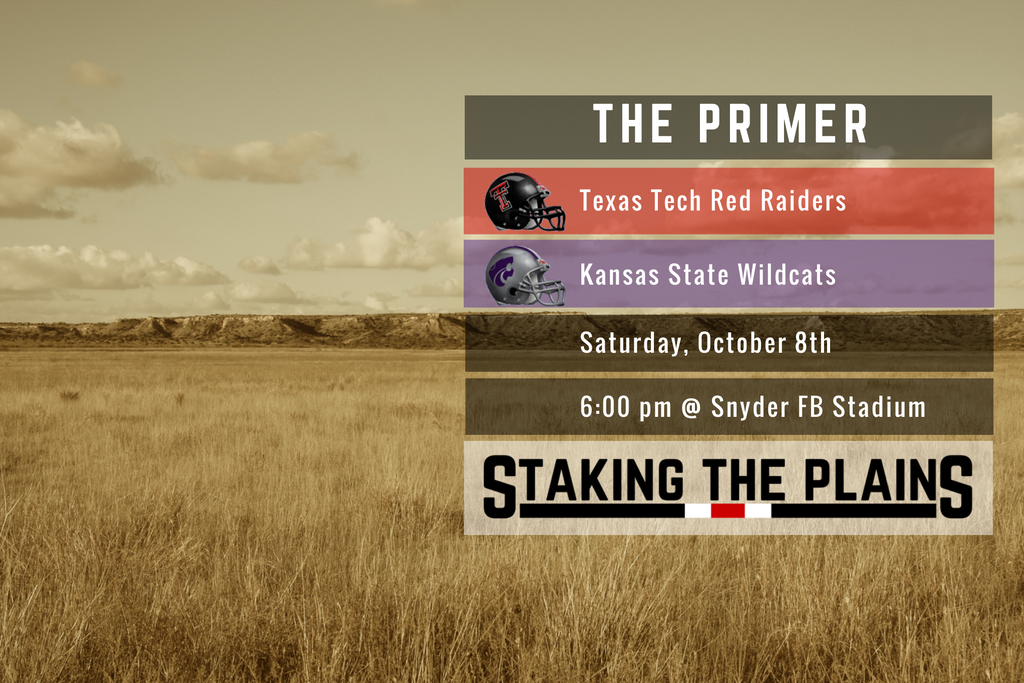 Your introduction to Texas Tech’s first conference game on the road as they head to Manhattan to take on Kansas State.

Texas Tech won on Thursday night, beating Kansas 55-19, but coming at a cost with Patrick Mahomes reportedly injuring his AC joint, a second degree strain. The Texas Tech defense held Kansas under 300 yards. Kansas State lost a heart-breaker to West Virginia on the road, 17-16. K-State went 2-1 for their non-conference portion of the schedule, losing to Stanford, then beating Florida Atlantic and Missouri State, not exactly top flight competition for those two other games.

1. QB Jesse Ertz (6-3/212): Ertz hasn’t necessarily been the quarterback that they thought he would be, as he’s only completed 48% of his passes for 146 yards a game for just 7 yards an attempt, 4 touchdowns and 2 interceptions. I think that the K-State contingent thought that Ertz would be more dynamic and that hasn’t been the case. And it has largely been Ertz at the helm as Joe Hubener has been the spot-guy, but not a ton of attempts, just 12 overall. Ertz has run for 170 yards, good for about 4.5 yards a carry for 2 touchdowns. Ertz does lead the team in rushing.

2. RB Charles Jones (5-10/208): Not that Jones is terrible, but I thought for sure that Snyder would find someone other than Jones to carry the load this year. Like I said, Jones wasn’t terrible, but I thought that K-State would find a true lead back that can carry the load other than the quarterback carrying the load. Jones has just 159 yards thus far, 40 yards a game and just 1 touchdown.

3. LB Elijah Lee (6-3/228): What K-State does have is a terrific defense and you could say that it is lead by Lee, who leads the team with 33 tackles, has 3.5 tackles for a loss, 1 interception, and 1 sack thus far this year. The K-State defense is legitimate, as legitimate as the Texas Tech offense.

4. DE Jordan Wood (6-5/258): Wood leads the team with 4 sacks thus far this year, to go along with 16 tackles and 5.5 tackles for a loss. The Wildcats are 4th overall in total defense, 8th in run defense and 12th in pass defense. Not a lot of splash statistics, which shouldn’t be a surprise, but it they’re getting the job done. Now, they haven’t played a ton of offensive minded teams, but I’d love those stats at this point.

Via OddsShark, there is no opening line, I’m guessing because Vegas wants to wait on the status of Patrick Mahomes before committing to a line.