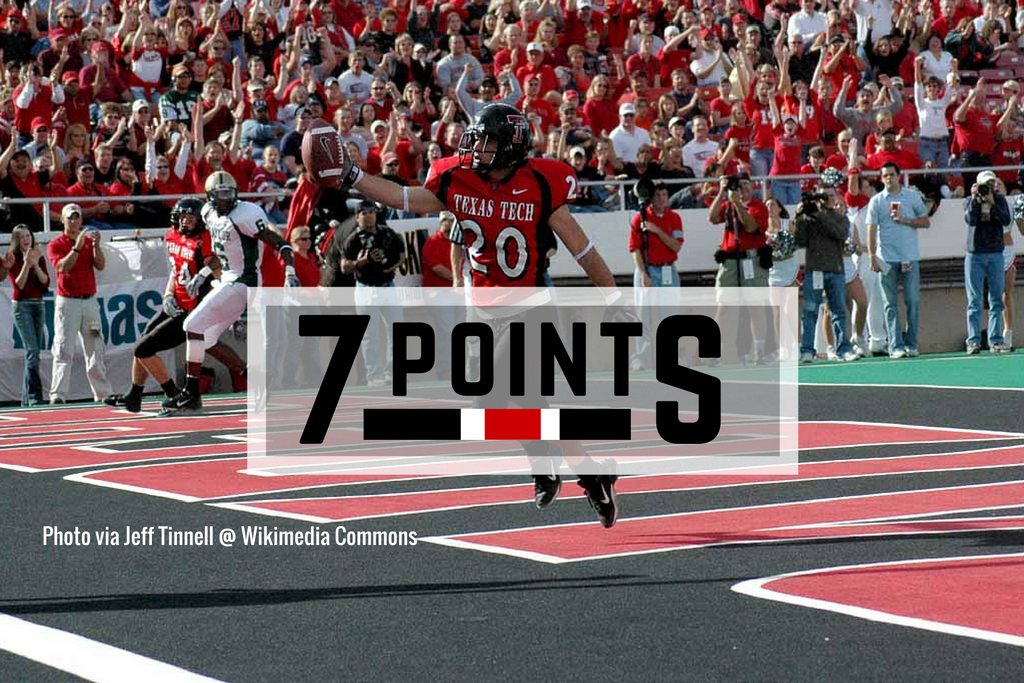 Your seven point preview to Texas Tech hosting the Kansas Jayhawks for a Thursday night showdown.

I wanted to write about how the defense is in a situation where there’s a crossroads coming up and I’m really not sure what to do about it.

The week before last, Texas lost to California and Oklahoma lost to Ohio State. The Monday after their respective losses, Charlie Strong was already talking about how the defensive coaches are on notice. This is after giving up 40 some odd points to California, which is a pretty decent team. Meanwhile, Sooner fans on Twitter seemed to call for the head of Mike Stoops after the Sooners were rolled by Ohio State. This of course is coming off of a terrible loss to Houston the first game of the year (I should remind everyone that Stoops led a top 5 defense last year, seriously, that defense last year was terrific and it’s funny how things change in a year).

In both instances, you could feel that the fans of each respective program were itching for something to change because status quo wasn’t good enough.

Meanwhile, here we are in Lubbock. And there are certain fans of Texas Tech who would like to see change, but I get the sense that the last thing that we want to see is yet another change at defensive coordinator.

And that’s the tricky part, trying to figure out when the “right” time for something like this is.

When Kingsbury was on with A.J. Hawk, it wasn’t the stuff about Kingsbury’s staff catfishing some of the players by having fake girls follow them on Twitter, but it was the news that when Kingsbury started, he literally didn’t know anyone. Just the guys he knew from prior stops at Houston and at TAMU, but that’s it. That’s the reason that the coaches that were fired last summer were all his friends, because he didn’t have a circle of coaches to pull from. Now that Kingsbury has had a few years under his belt, that circle has increased, but . . . that pool is still relatively limited due to the fact that there’s a limit as to the salary that he can pay any assistant coaches.

The key here for me is that Kingsbury hired his friends because he literally didn’t know anyone else and if you wanted to know what the biggest jump from assistant to head coach it’s just that. Maybe for some coaches who have been around would know, but for coaches like Kingsbury, his circle was limited to who he knew and that was it.

That’s a problem. It didn’t help that Wallerstedt was allegedly not doing things the right way, but it’s even more of a problem that there’s been this rotation of head defensive coaches in charge up until David Gibbs.

The results this year are not pretty and I hesitate to think that they’ll get better. The one thing that Texas Tech had going for it last year was turnovers and right now, that hasn’t happened. Over the first three games last year, this team had 8 turnovers. Heck, one of those turnovers may have saved the Arkansas game last year. But when Gibbs hangs his hat on those turnovers, and turnovers aren’t happening, then that’s a real problem. As of right now, Texas Tech only had 3 turnovers, all 3 coming in that first game.

My inclination here is to advise Kingsbury to keep things status quo, allow Gibbs and Zach Spavital to continue to build what they’ve built before, despite the fact that the results look pretty rough right now because the alternative is, at least to me, significantly less satisfying.

Zero. That’s the number of turnovers this defense has had over the past two games. If this defense doesn’t create turnovers, as mentioned above, then I don’t have much, if any, answers. 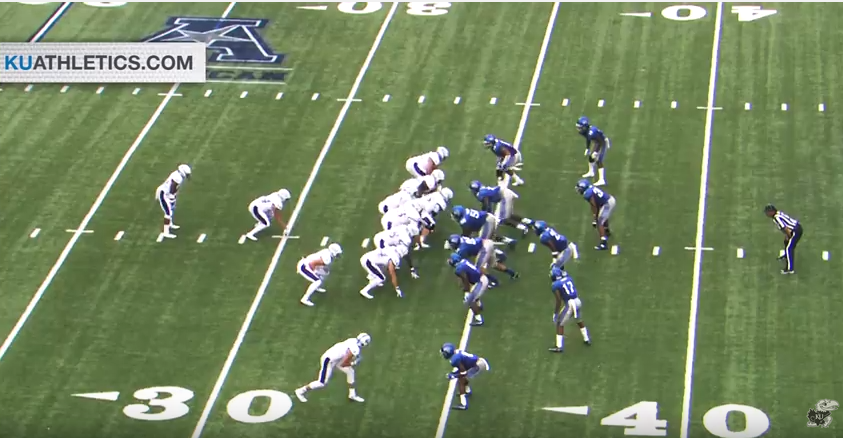 In previous years, Kansas was pretty much a spread team and the Jayhawks may still do that, but this was also on the film against Memphis, which is basically 31 personnel (3 running backs and 1 tight end) and Kansas does a really terrific job of blocking this particular play and it’s a simple handoff where the running back goes weakside (to the top of the screen, away from the tight end) and the running back rumbles for some terrific yards. 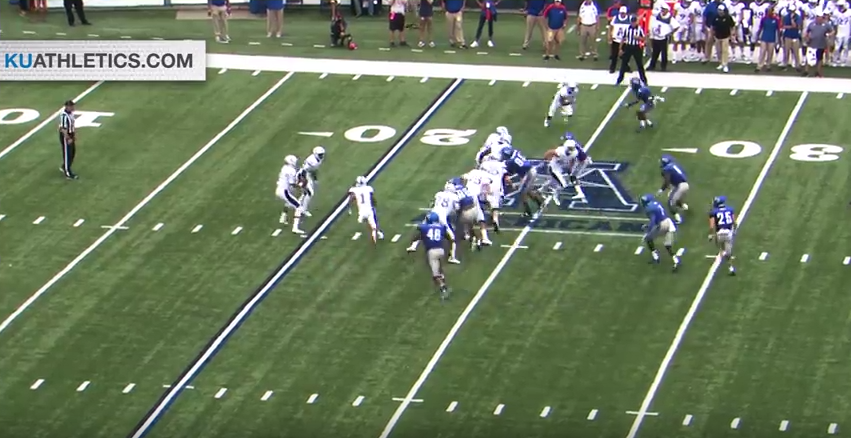 Here again, Kansas is down blocking their offensive linemen to the short side of the field. Notice the tight end releasing and looking for that second level linebacker, while the Kansas quarterback fakes the handoff and the Memphis defensive end, #48, is running full steam ahead, while the running back slips out to the flat to receive an absolute beauty of a screen pass that goes for big yards. Really, a terrifically designed play, the KU offensive line has everyone moving away from the play.

The key here is that the Texas Tech defense better have their head on a swivel, stay at home and make your play.

The Kansas offense is, at least right now, led by Montrell Cozart, who is throwing for just 161 yards a game, completing 68% of his passes for 5 touchdowns and 3 interceptions. I think Kansas fans question whether or not Cozart really should be starting, and I’d guess that Cozart is going to continue to get starts, but I think I’d bite the bullet and play sophomore Ryan Willis. I think Willis has some good skills, but I’m not the head coach.

The leading rusher is Ke’aun Kinner, a senior who has run for just 134 yards this year with a touchdown and is averaging about 5 and a half yards a carry. I mentioned Khalil Herbert in the Primer as a guy that scares me a bit because he’s got some big play potential. 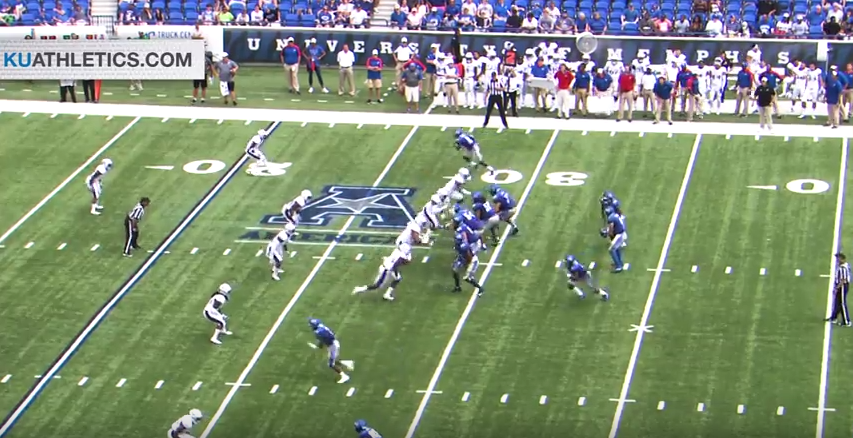 I think you’ll see a bunch of this look from Kansas, which is basically a 4-2-5 defense. The Kansas defensive ends will look to really push up the field and they’ll do it quickly. Terence Steele and Madison Akamnonu will need to be on point this game because Kansas really has done a good job of getting behind the line of scrimmage. The line will need to get their hands on players. The secondary won’t really wow you, they’ll play basic zone coverage. 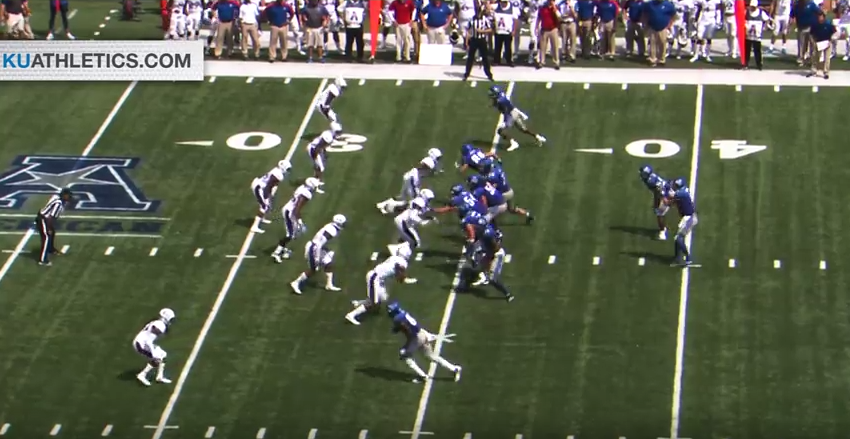 Here, the Kansas defense is just rushing three and they’ve got four linebackers, with the fourth linebacker really a stand-up defensive end type of player. On this particular play, the Kansas defensive line crushes the pocket and the Memphis quarterback takes a sack. That’s just with three rushing linemen.

The previously mentioned Bazie Bates IV leads KU in tackles with 18, 16 of them solo tackles, which means that he’s making a lot of plays on his own. The second leading tackler, which is a bit of a surprise, is Daniel Wise, the defensive tackle, who already has 16 tackles on the year. I’d love it for that to happen for Texas Tech. Also mentioned in the primer was Dorance Armstrong, Jr. the defensive end who was down to Texas Tech and Kansas on signing day and he already has four tackles for loss as does Wise. Armstrong also has 2 sacks thus far and that leads the team.

Linebackers Joe Dineen, Jr., Marcquis Roberts and Osaze Ogbedor are the primary linebackers with Roberts and Dineen making plays behind the line of scrimmage, Roberts with 4 tackles for a loss and Dineen with 3 on the year.

Aside from Bates, Fish Smithson and Tevin Shaw are your safeties, with Shaw playing more of a nickelback spot. Marnez Ogletree and Brandon Stewart are the two primary cornerbacks. Ogletree and 3 pass break-ups along with Shaw. Shaw also has 2 tackles behind the line of scrimmage and Smithson and Bates each have an interception.

The line has moved to 28.5 after opening at 27 and the history here is that Kansas plays Texas Tech really close. I tend to agree with Kingsbury when he said that the result that happened in Memphis was a result of turnovers, something that Texas Tech hasn’t had in two straight games. I don’t know if the turnovers happen, but they need to happen if Texas Tech is going to get that spread, otherwise, I’ll take all of those points.