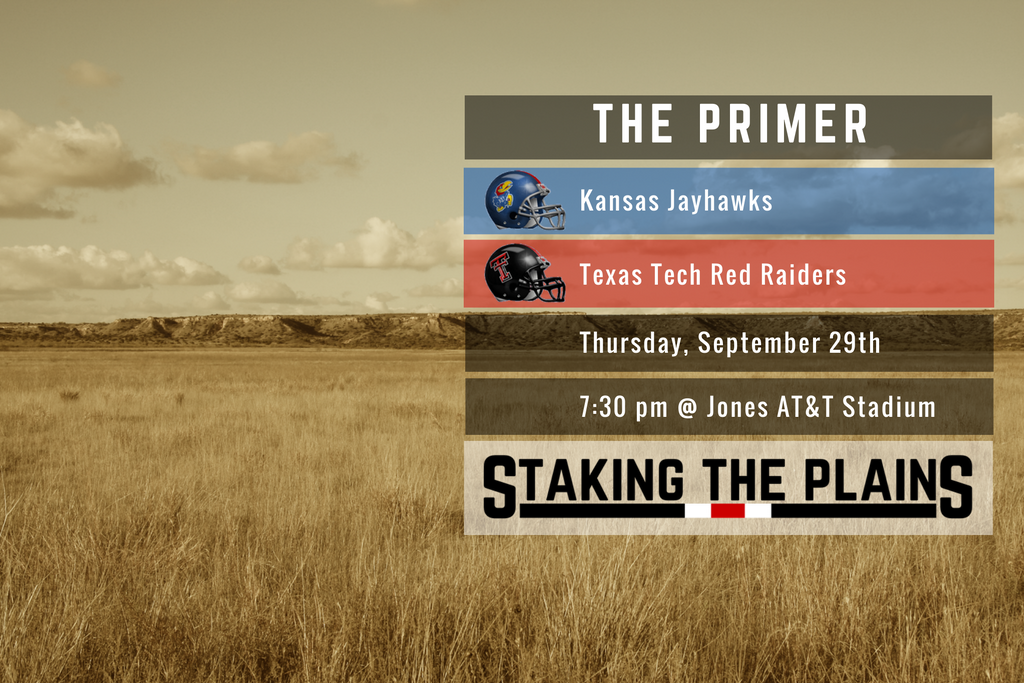 An initial quick glance of the Kansas Jayhawks, including when, where and when as well as the opening Vegas lines.

Both teams were on a bye this Saturday, so we’re both looking at games from the following week. Texas Tech took care of business with Louisiana Tech, to a certain extent, while Kansas won their first game under David Beaty, but lost to Ohio 37-21 and was blown out by Memphis, 43-7.

1. QB Montrell Cozart (6-2/196): Cozart has gotten all three starts, but it hasn’t been all pretty, particularly against Memphs, where Cozart was just 13 of 21 for 87 yards. As you all may remember, Ryan Willis lit up Texas Tech’s defense last year as a true freshman and he’s been subbing in played a significant number of snaps against Memphis, but he also only completed 9 of 13 for 80 yards.

3. De Dorance Armstrong, Jr. (6-4/241), LB Marcquis Roberts (6-1/223) and Daniel Wise (6-3/290): It’s only supposed to be four players, but did you know . . . Kansas is tied for 10th in the nation in tackles behind the line of scrimmage with 29 and Armstrong, Roberts and Wise each have 4 tackles for a loss each. That’s a lot and that’s probably an indication as to how the defense for Kansas will try to play Texas Tech.

4. S Bazie Bates IV (6-1/189): Bates is a safety who is a senior and was a junior college transfer from TVCC and aside from having a name that’s pretty awesome, Bazie, he’s leading the team with 16 tackles, 1 tackle for a loss, 2 passes broken up, an interception and that’s a pretty active stat line.