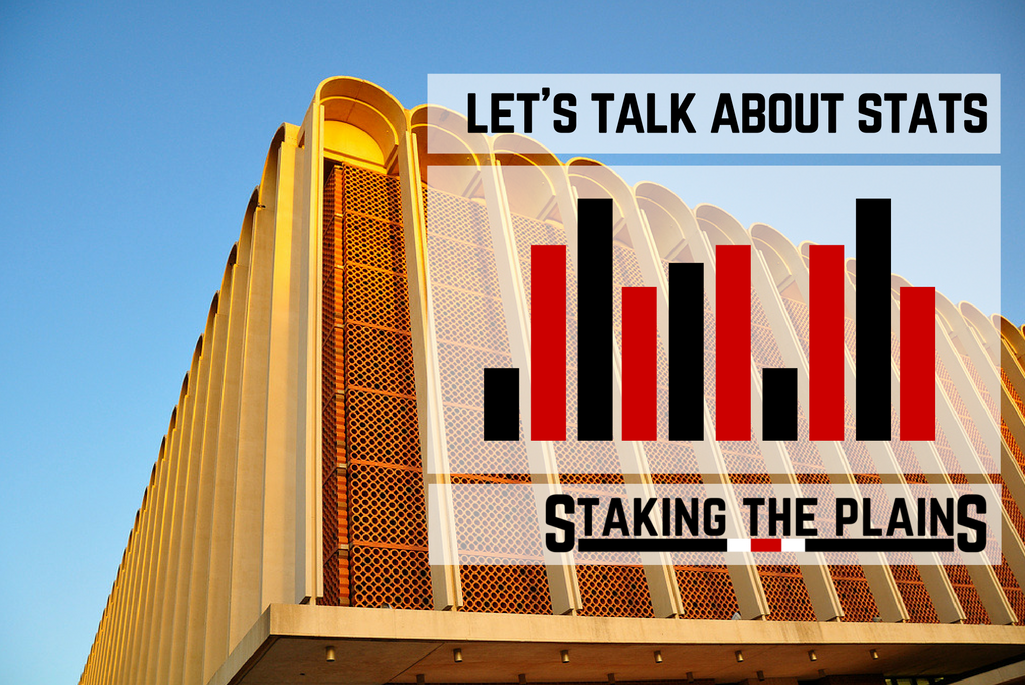 As always, the status from the tremendous sites, Football Study Hall and CFBStats, are terrific resources for any college football fans that are into stats. 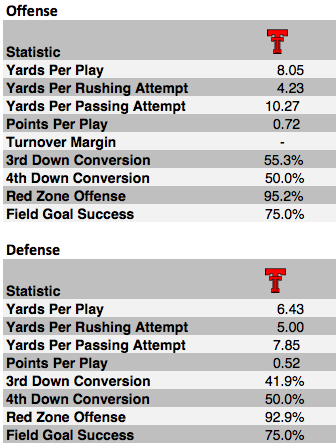 It’s a bye week, but that doesn’t mean that we can’t talk about stats, especially since the non-conference portion of the schedule is over and done with.

So, the offense is pretty spectacular and it would surprise me if there were many offenses that were better than what Texas Tech does offensively. I’d add that the one thing that I think needs improvement is the third down completion percentage. Perhaps with the emergence of a running game and an emphasis on reducing those penalties, I think there’s a chance for even greater improvement offensively.

The one item that I think also needs to be addressed is the turnover margin, which is squarely at 3-3. Three turnovers for the offense, all three interceptions, and 3 turnovers for the defense. The defense hasn’t had any turnovers since the first game, and it’s a bit worrisome that it seems like the defense really hasn’t been close to a turnover. Kingsbury said that turnovers can happen in bunches and he hopes that’s something that will happen over the course of Big 12 play, but that’s the thing about turnovers is that they really are pretty random. Gibbs has said that he preaches turnovers and last year those turnovers arrived, but there’s no guarantee with turnovers and if a defense is largely successful as a result of something that can be random, that’s a problem.

Defensively, you know the drill. The yards per play aren’t as bad as I thought they would be. The offense is unbelievable and even the struggling defense hasn’t reached that level of equaling the defense. It’s getting way too close, but this is it. And the other interesting stat was how the defense is allowing just 0.52 points per play, which is still pretty far behind the offense. If the defense does turn the ball over, then I think 8 games is still in reach. 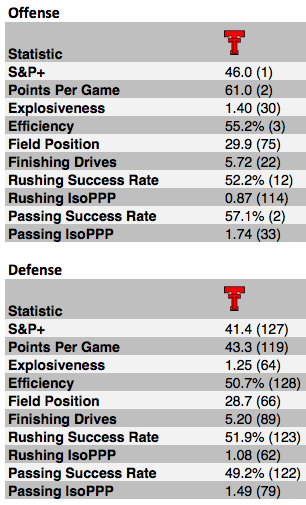 The advanced stats for the offense are unbelievable as well, being first at S&P+ is significant. The lone spot that looks like needs some work is the field position and the rushing explosive plays (Rushing IsoPPP).

Still though, I think if Felton continues to get the ball, that number will get better over the course of the year.

Defensively, it is as bad as you think it is. The worrisome part for me is how the defense is terrible in both rushing and passing success rates, which means that there really isn’t a down or distance where opposing offenses are having an issue.

I don’t know how the defense is going to improve significantly. Perhaps if they can get some turnovers, then some figures improve. Maybe a light comes on at some point, but this is a literally Charles Dickens’, a Tale of Two Cities, it was the best of times, it was the worst of times.