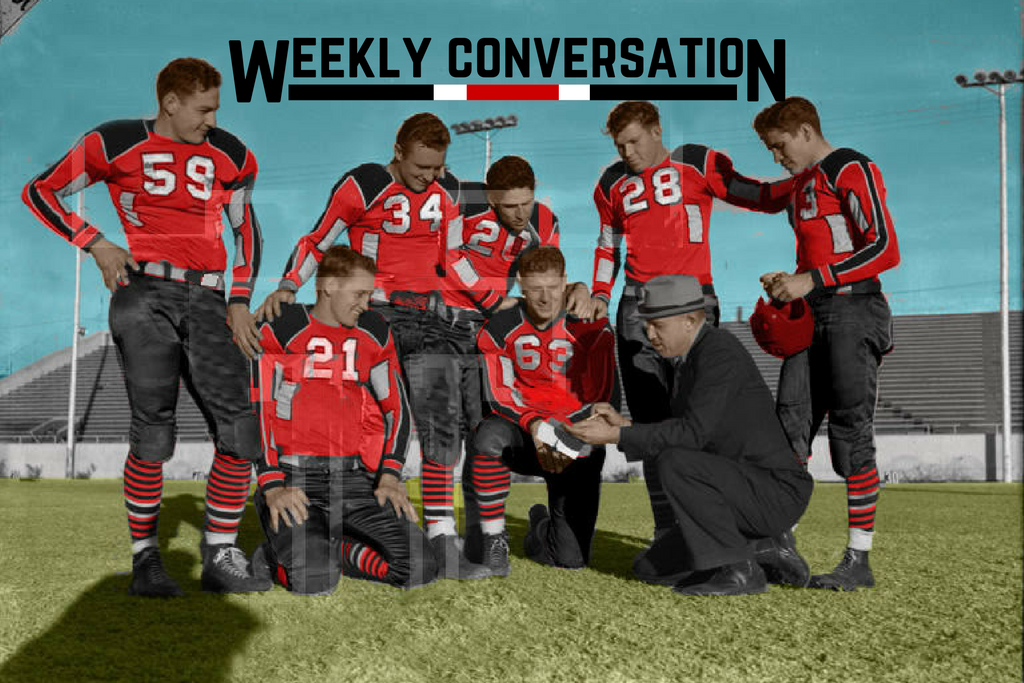 Travis and Seth discuss the Arizona State loss and our kids’ athletic abilities.

Seth: Such a disappointing game, not just losing, but maybe the idea of being hopeful that things would change with the defense this year. The effect of Rusty Whitt and the performance from the week before last, I really thought that the team was starting to round the bend, not turn the corner, but just get away from what has been a disaster for so long.

Travis: Yeah, such a downer. Late at night, everybody in the house is asleep so you’re there by yourself, in the dark with a couple of drinks just hoping for a stop that never seems to come. It’s like being slowly squeezed to death by a python. Just a slow, slithering evil thing wrapping around your torso and neck until, before you know it, you’re dead.

Other than that though, everything is great.

I don’t know, though. They can’t be that bad, right? I mean, we should see some improvement as the year goes on? Right? Right?

Seth: I keep hoping that there’s some sort of middle ground here, that this was the worst that could happen and the Saturday before last was the best. There just has to be some sort of middle ground where there’s some improvement. It is infuriating to see how it’s the same song, yet different verse. I keep looking for answers, but at some point, I’m just coming up with my hands facing up and shrugging my shoulders. It’s amazing the length of time that it has taken for the defense to turn around and at some point, there has to be a light that clicks and we’re all able to move forward just a bit. I didn’t see the Ondre Pipkins that we saw the week before, or Kolin Hill being able to bring pressure. Maybe at some point, Gibbs is just going to have to blitz the hell out of everyone and be aggressive as hell. I don’t know.

I also think that Kingsbury could alleviate some of the pressure on the defense by running more and taking up some more of the clock. The defense is on the field so quickly at times, they hardly have time to breathe. I know Kingsbury’s goal is to make lots and lots of touchdowns, but I think running the ball was the sole reason why this team was 7-6 last year, being able to tire out opposing defenses as well.

If you’ve got anything else to add, I’m deeply interested in your and everyone else’s input into a situation that arose last weekend.

Youssouf is playing soccer, and for those that need to be caught up, Youssouf came home from the Democratic Republic of Congo in May of this year. He’s been home for four months and things are going terrific. Youssouf said he waited to play soccer and so of course, we thought that would be a great idea (for those of you who are curious, Fitsum is playing basketball, so they’re both covered). Youssouf has always seemed athletic, but I haven’t had anything to base that on other than Fitsum. We just haven’t had a lot of time to play with his peers just yet. So, the soccer coach ended up quitting and I took on that responsibility. We had one practice, last Thursday, and a game on Saturday.

Practice was fine. My main philosophy is to teach them how to dribble more than anything else, figuring that if they can dribble and dribble in traffic, then they’ll eventually score goals.

Saturday rolls around and we have a team of just 5 players (it’s boys and girls, but we only have boys on our team) for the game. It’s 4-on-4 soccer with no goalie and Youssouf is playing in the 4-6 group. He’ll be 5 in October. So, the game starts, I have Youssouf start because another kid was late to practice. In any event, we’re the Hot Shots and our colors are red and black, the other team, is the Wave. The Wave kicks off and I think within 10 seconds, Youffouf had stolen the ball, dribbled down the field faster than anyone could run, and scored an uncontested goal. The Wave kicks off again, and Youssouf scores again. This happened 10 times on Saturday, the final score being 14-4. I subbed in players regularly and I ended up sitting Youssouf more than half the game, which by the rules, I’m not supposed to do. Everyone is supposed to play half of a game, but it became embarrassing at some point. Not only that, other parents for the Wave were starting to get frustrated and there was this mom there that yelled, “Push him back!”

I do want to clarify that I didn’t teach him how to play. He learned how to play in the D.R.C. He can kick a ball barefoot just as good as he can kick with shoes on. He has callused feet, which makes me think that playing in the streets and barefoot for him was a common occurrence. He executed a picture perfect slide tackle of a little girl and stole the ball, but he was whistled for a penalty. He didn’t touch her, she just fell and was surprised. I had to tell him to sand-bag in the second half and to pass to his teammates, which he did, but at some point, he didn’t want them to score, so he took matters into his own hands. Here’s some video and the person cheering in the background is Fitsum cheering on his little brother.

So, I’ve a couple of things going on, and we have have to let some of this bleed over to next week too, because I think it’s a fascinating topic.

1. Youssouf is obviously too good for the level he’s at (I had no idea before signing him up) and we’ll move him up next year, but there’s some sort of parental obligation to push a kid who is talented at a particular thing. You have Claire, and she and your family is as dedicated to her progressing as a basketball player as I’ve ever seen. She’s special and I think you (we) have an obligation to both nurture that talent as well as let this be their thing.

2. I don’t know how I’m going to let the rest of the season play out. I’m hoping that there’s some players that are up to where Youssouf is at and he’s challenged, but if he’s not, then I don’t know what to do. I looked at the Wave’s bench and they weren’t too happy and I don’t know what to do about that. He’s just a kid that did exactly what his dad told him to do, which is score goals. I told the entire team to go score goals, Youssouf just did it better than anyone else. I have to let him play and just be good, right, or do I hold him back?

Travis: Man, that’s pretty impressive that he was that dominant in his first game. It sounds to me like you are handling all of this as well as you can. There are so many variables in a situation like this and I think the key is to focus first on his development both physically and mentally as an athlete- which includes how he treats others, teamwork, etc. Again, it sounds as if you are covering all the bases here.

One thing that we’ve always done with Claire (not as some sort of master plan but rather just sheer luck) is to push her outside of her comfort zone. So, for instance, she played on 2 teams last summer. The first team were the group of girls she’s been playing with for years. On that team she’s one of the better players. But we also found a varsity AAU team that she played for, and she was the youngest kid on the team. The practices and tournaments were INTENSE but she grew so much as a player over the course of the summer as a result. During the first several tourneys she’d be lucky to get a minute or two in garbage time. But by the end of the summer she was a regular part of the rotation and got some valuable experience.

So, if I was to offer any advice, it’d be to have fun with this team for now, but also begin to search out opportunities that will challenge Youssouf. Believe me, they’re out there. The new challenges will keep him engaged. And yes, I hope to continue this conversation throughout the year as he progresses.

But for now, how do you see Saturday playing out. I know you’re taking the fam to the game, so what are you most looking forward to sharing with them, particularly the boys?

Seth: I think Texas Tech reverts back to their form from SFA more so than Arizona State. That’s probably wishful thinking more than anything else and everything that’s happened to the team in the last weeks seems to go against the grain. Maybe that’s the ever-hopeful fan in me. I’ll take Texas Tech 48-35, or something like that. So, yes, I am going to the game, and the forecast looks terrible, rain in the evening, but I guess we’ll just deal with that when and if that happens. Thanks to Blackbeard, I’ll be in the grassy area between the BA (south) baseball field (east) and Coliseum (north) around 3 or 4 on Saturday. I don’t know how the boys are going to react to the game, so that will be interesting. Will they be beat down by the rain or will they be totally cool? I have no idea. They’re sometimes hard to read.

How many hundreds will Texas Tech win by on Saturday?