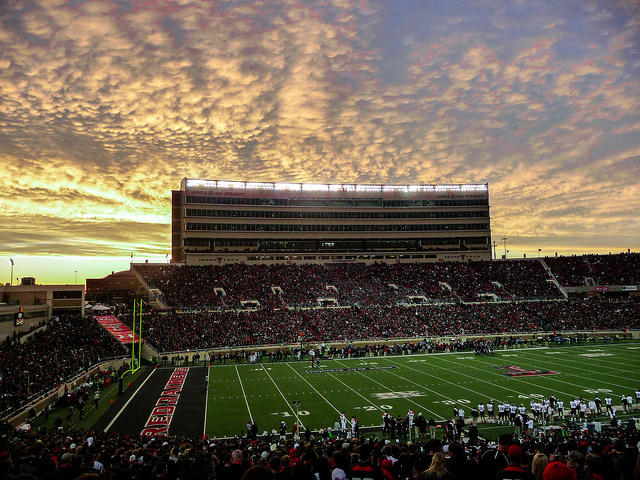 Texas Tech held their media day with the local media yesterday and you’ll see a ton of coverage from yesterday for the next couple of days. The media pretty much gets full access to the players as they want them (although I don’t think that true freshmen are allowed to speak to the media).

The media days kicked off with Kirby Hocutt making an opening statement. Hocutt touched on a handful of items, namely that he’s seen the work that the football team has put in during the spring and the summer and expects improvements. Also touched on how season tickets has increased with men’s basketball and there is a waiting list on baseball. Hocutt also said that the north end zone should be 99% complete by the SFA game and open and ready for use.

Head coach Kliff Kingsbury then spoke and you can watch the entire thing here:

Some quick notes that I thought was interesting (Kingsbury of course mentioned Rusty Whitt and his impact): More confidence in David Gibbs being in year two . . . Gary Moore, D’Vonta Hinton and Luke Stice are all guys that Kingsbury is counting on with the defense . . . Baylen Brown and Justin Murphy head up the offensive line an there is a 5th guy that they are looking to step up during the preseason practice . . . Jack Reichel was listed as the starter at left guard, but also look for Madison Akamnonu, Cody Wheeler and Paul Stawarz need to step up . . . Justin Murphy is bigger stronger and faster than last year. He was a force and he’s a full go . . .

The recently fired Art Briles went 15-22 through three seasons at Baylor, then 10-3 in year four to start a stretch of double-digit victory totals four times in five seasons. Mike Gundy went 18-19 through three seasons at Oklahoma State, then went 9-4 in years four and five and posted double-digit win totals four times in the following six seasons.

Three years into his tenure, Kingsbury’s 19-19 and eager to take a similar step up.

“Going into year four, the majority of these players are players that we recruited,” Kingsbury said Sunday during the team’s media day at Jones AT&T Stadium. “They understand our culture. They’ve been with us. They know who we are. We know who they are. So it feels more comfortable, which is good.

“It’s been a process, and I’m proud of the way these coaches and players have developed over the last four years and excited to see what this year brings.”

LAJ’s Don Williams has his football notebook from the media day and it’s chock full of good stuff, so make sure and check it out. One of the first items was Williams asking offensive coordinator Eric Morris who he thought would lead the team in catches, and Morris thought it would be Jonathan Giles:

“You’re thinking Reg (Davis) and Dylan (Cantrell) are going to have to split balls at Z, (Derrick) Willies and (Devin) Lauderdale at X, Cam (Batson) and Keke (Coutee) at H,” Morris said. “Someone’s going to really take off, just like they always do in team sports, but that’s a tough one. The ‘Y’ (inside receiver, Giles’ position) generally in this offense, over the course of time, has caught more balls than anybody.”

Red Raider Sports’ Will McKay also has a notebook as well that’s equally as good and McKay pointed out something that I sorta noticed as the interviews rolled in was that the players, almost unanimously, all mentioned Rusty Whitt and the impact that he had on the team this year. There are links to video interviews that McKay did with players and coaches that are worth your time. Additionally, here are a couple of notes on the defensive line, namely Ondre Pipkins and Joe Wallace at nose tackle:

– Another name mentioned by several players? True freshman nose tackle Joe Wallace. Breiden Fehoko and Ondre Pipkens both made sure to mention how Wallace has performed this summer so far. They noted that Wallace was surprisingly athletic for a player of his size.

– Pipkens has really transformed his body in the last few months. He lost 40 pounds thanks to both Whitt and the Texas Tech nutrition staff, as he’s now down to a lean 309 pounds. It really sounds like he’s going to be a big part of what the Red Raider defensive line does, and I know Fehoko is excited to play next to him this year.

You should also check out Double-T 97.3’s video page where they did interviews with lots of coaches and players

Miscellaneous. Via College Football Talk, starting Louisiana Tech quarterback Ryan Diggins was arrested on Friday on DWI charges and the field sobriety test had Diggins’ BAC at .119 way above the legal limit. Louisiana Tech is the second game for Texas Tech this year . . . you can check out a photo gallery of the 2016 media day . . .