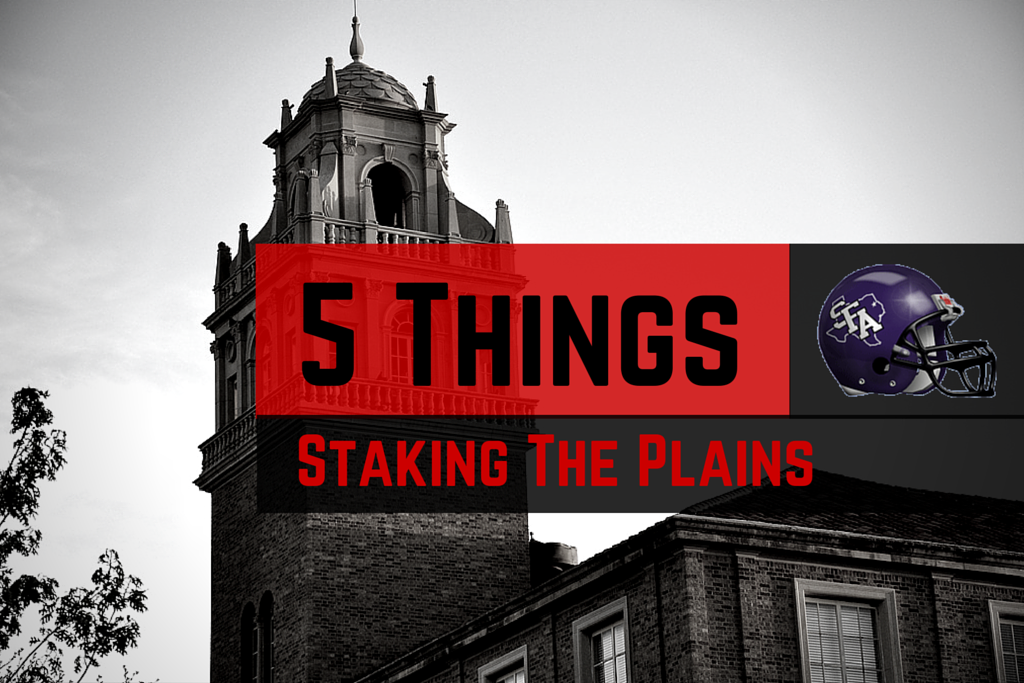 We take our first look at the first Texas Tech football opponent for the 2016 season, the SFA Lumberjacks.

May want to turn down the volume on the video.

SFA appears to run a pretty standard spread, utilizing their quarterback with some zone read plays and a quarterback that has a good arm, but has a bit of a slow windup. The Lumberjacks do use a tight end and do play with a fullback as well at times. The best players, just from watching the highlights are the running backs. They’re not exactly small and theydo a nice job of finding space along the line. The offense likes to line it up with a fullback and a tight end around the goal line. Just from watching the video, it appears that the SFA receivers are smallish, but have some excellent quickness. When they get going, they can move. They also like utilizing those crossing patterns across the middle of the field.

The offense is led by senior quarterback Zach Conque (6-6/237), who averages about 176 yards a game passing, completing 58% of his passes to go along with 16 touchdowns and 8 interceptions. Conque is also a bit of a runner as he averages about 50 yards a game on the ground. Oh, and he’s also the head coach’s son. That’s a bit deceiving as he lost quite a bit of yardage on sacks, nearly 190 yards, but that probably also speaks to Conque holding onto the ball a bit long rather than tuck the ball and run or a bit of a rough offensive line. Conque did an excellent job of getting the ball in the endzone as he had 11 rushing touchdowns last year.

The offensive line replaces 3 starters from last year, but they do have a veteran group overall. This is always the toughest position to write about a team that you don’t regularly watch, even more difficult knowing that whatever you watched last year is being replaced for the most part. The most likely replacements are Anthony Pullins (6-3/296), Travis Wiggins (6-3/300), who started last year and will be helped out by Jake Wallace (6-0/285) and Marshall Womack (6-5/285) as well as Shane Roberson (6-2/304), Hayden Scott (6-3/286) and Devonte Jones (6-2/305).

SFA gave up nearly 500 yards a game last year, which is think is better than previous years, and was good for 98th in the nation in FCS rankings. Teams were able to throw 248 yards a game and run on average 185 yards a game against the Lumberjacks. And this appears to be the problem, which is that they’ve still given up a ton of points on defense, but hasn’t been as good on offense.

Inside SFA has to replace three seniors along the line and as a result, the Lumberjacks had to move Mitchel Zimmerle (6-3/284) and Darrell Vanerson (6-3/288) from the defensive end to defensive tackle. As you’ll note, these are not small defensive ends like Texas Tech has, and Zimmerle had 26 tackles last year while Vannerson was used much less. Aside from that, there’s a group of sophomore defenive linemen that should help, including Lamont Alexander (6-3/300), Braxton Kelly (6-1/290), Demetrion Amie (6-4/272 and Bubu Alvarez (5-10/260).

It will be interesting to see what SFA does in the defensive backfield, where they were pretty terrible. Tre Rosser (5-11/185) and Tarri Mitchell (5-10/186) are the most likely cornerbacks along with Jimmie Houston (6-1/184)). SFA also tried to address the cornerback spot by signing two JUCO guys, Aaron Foy (5-11/184) and Trent Perriman (5-11/184, both from Navarro. Patrick Martin (5-9/186) and Ahmad Muhammad (6-0/196) are the two big safeties along with Germond Williams (5-9/178). As a unit, they only found themselves on the right side of 8 interceptions and they don’t have a ton of passes defended. The most passes defended by any one player is 5 and that was done by Martin and Marion Hall.

SFA will have to replace both punter and kicker, so we’ll see how that goes. As far as returners are concerned, Sylvester is the leading kickoff returner averaging over 21 yards a game and Trevon Smith, Aaron Piper and Joshawa West could all fill in if needed while Judah Jones is the primary punt returner.

SFA is actually pretty good offensively, about 25th overall in FCS, fairly evenly balanced, averaging each 200 yards or so on the ground and through the air. I think they should probably be a running team more than a passing team, but with that offensive line, that may not be as easy. The other issue is that SFA doesn’t get the ball in the end zone, only 47th in scoring offense. A lot like Texas Tech a year or so ago, they were pretty good at gaining yards last year 39th, but not so great at converting scoring 29 points a game. they also had issues scoring in the red zone, only 97th overall. We talked a bit about the defense for SFA and they’re pretty terrible too, giving up 432 yards a game. And like we talk every year, I know Texas Tech’s defense was pretty terrible, but we’re talking about SFA.

At 4-7 last year, it’s difficult to see this being much of a game, unless SFA really slows things down. And it might be tough for the SFA offensive line to really gel with this being the first game of the season.