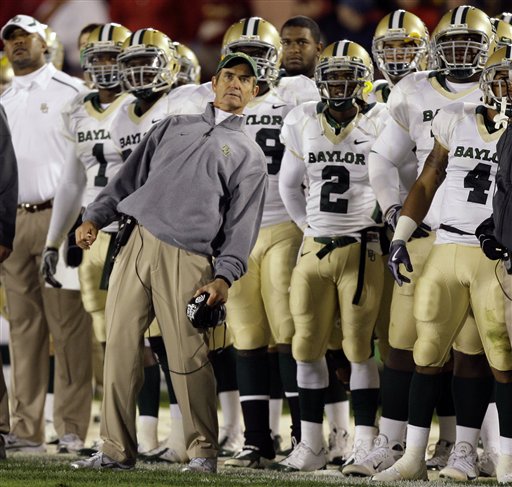 Recapping the news from the Baylor and Art Briles situation.

There’s so many things that I simply don’t understand about what happened with Baylor and Art Briles. This is going to sound weird, but the biggest thing that I simply don’t understand is Briles’ ego. As early as last week, Briles tweeted something (Briles has since deleted his account) with the hashtag #truthdontlie and #becourageous. When that tweet was sent . . . he knew. He knew everything that’s happened. He knew all of the information that’s contained in that report . . . yet . . . he still had that arrogance about himself and the program. Heck, even Art Briles’ daughter made it clear in a Facebook post that I really don’t think that they get it:

But one person close to Briles has spoken out in defense of the soon-to-be former coach and the “disgusting” treatment of him by the university.

Briles’ daughter, Staley Lebby, posted her thoughts to Facebook on Thursday afternoon, calling the firing part of a “media witch hunt” and that the Briles family isn’t “backing down and throwing in the towel.”

See? It’s about what’s being done to him. Not what happened to the women of Baylor. Even after that report is released, where it is reported that the staff is essentially coercing women not to talk and we’re still talking about how Briles was treated unfairly.

Briles just doesn’t get it. Up and until the bitter end.

Since I’m not as good as words as other people, I’ve rounded up what I think was the best about the situation at Baylor.

* Baylor’s existence as a Power Five school should be up for review, via CBS Sports’ Dennis Dodds:

But the market can speak. Common human decency can speak. Baylor’s had its chance to prove it is big time, not just on the field but off it, too. It succeeded mightily in that first charge. Will the ways in which it reached that level be forgotten in eight years?

Forget the current strife. One source told CBS Sports that NCAA enforcement has spent more time on the Baylor campus than any other Big 12 school.

Briles’ departure will no doubt mean a dip in football fortunes. To that point, if Baylor doesn’t do it, the NCAA should: Allow current players to transfer without penalty. None of this is the fault of the vast majority of players that have come through the program or are on the team now.

* Gridiron glory will no longer be the legacy of Art Briles era at Baylor, via FOX Sports Stewart Mandel:

And then, in an exchange that seemingly sums up his attitude on the entire issue, tried to put a kibosh on that annoying line of questions. “Let’s talk about football. I’m through talking about that.”

The central element of Briles’ folksy persona was the fact he still considered himself a Texas high school coach at heart. Which was largely seen as a virtue.

Perhaps in high school you can focus almost entirely on drawing up plays and coaching ball. In college you are part of a larger campus community. The report findings paint a picture of a coach completely isolated from the world outside the football building — i.e., the safety of its female students.

Briles likely won’t be coaching college ball again any time soon — not that some ADs won’t be tempted. He’s all but guaranteed to deliver your school victories and excitement. But it’s hard to imagine any conscionable university president is going to sign off on hiring a coach formally accused of endangering a campus.

FOX Sports spoke with one of the alleged victim’s family members about Briles’ dismissal. He admitted his heart sank when there were reports earlier in the week that Baylor president Ken Starr was being fired by the board and would become the fall guy for the scandal and Briles was safe.

“We were starting to wonder, ‘is he (Briles) really gonna get away with this?!’ There’s no way this can continue,” the man told FOX Sports. “But after I heard the news, man, it’s a relief, an absolute relief. Of course, it doesn’t take everything back. But somebody who could’ve prevented this, is not getting away it.

“You want some sort of justice. This just had to happen. It needed to.”

The release Thursday said the university would “create and maintain a culture of high moral standards among student-athletes and leadership.” You only create something when it heretofore didn’t exist.

We live in an era of great change within college football. The Power 5 conferences have concentrated the political clout within the sport among themselves. On the field, however, the power in college football hasn’t been this diffuse in the past 60 years. Sure, Alabama and Ohio State have won the two College Football Playoffs. But the cross-pollination between the College Football Playoff rankings and the programs with the top NCAA graduation rates has never been higher. Stanford, Northwestern and Duke, academic powerhouses all, are contending for and winning championships.

Even as college football gropes about to defend its way of life from those demanding salaries for the student-athletes, as coaches deal with big money and the win-now demands that come with it, the sport has come a long way from the cesspool in which it resided 30 years ago. The sport is cleaner than it used to be. Some ills are too virulent for winning to cure. In the end, that’s why Baylor got rid of Briles.

* Baylor Fires Art Briles, But Transparency is Absent From the University in a Complete Systemic Failure, via SI’s Andy Staples:

Without knowing some details of individual cases, the public won’t know how deep the rot went. The section Baylor released about the football program referenced coaches—plural—meeting with accusers and/or their parents. Briles was the only coach fired. As to who else was involved, the board included this in its release: “Additional members of the Administration and Athletics program have also been dismissed. Neither these individuals nor the disciplinary actions will be identified publicly.” That isn’t exactly transparent, nor does it offer any clue as to whether Baylor is doing enough to address the problems Pepper Hamilton found.

So what happened to the other coaches who decided to take rape investigations into their own hands? Had they already moved on to other schools? Are some being kept because it’s too inconvenient to wipe out an entire staff in late May? Those questions aren’t being answered yet, and the lack of a definitive answer suggests the interim plan isn’t set in stone. Baylor staffers were wondering Thursday afternoon when the university would definitively state who will run the football program for the 2016 season. Until such a statement is offered, it’s safest to assume nothing.

Briles’s replacement is reportedly Baylor defensive coordinator Phil Bennett, the same coach who, two months before Sam Ukwuachu was convicted of rape, announced that the player was expected to suit up for the 2015 football season.

Findings from the report are also consistent with information we’ve learned that questions the way other administrators and Baylor staff has handled assault allegations. According to Pepper Hamilton, “Administrators engaged in conduct that could be perceived as victim-blaming” and “Perceived judgmental responses by administrators based on a complainant’s alcohol or other drug use or prior consensual sexual activity also discouraged reporting or continued participation in the process” were among the failures. But if someone is being held accountable for the behavior being outlined here, we don’t know who it is.

Pepper Hamilton also notes that the Baylor University Police Department “contributed to, and in some instances, accommodated or created a hostile environment,” but the measures taken to put an end to that are currently a mystery.

* Fallout at Baylor: Will Others Learn, via Sports On Earth’s Matt Brown:

Everybody in college athletics will point at and condemn Baylor’s actions, and rightfully so. But when reading the 13 pages that got Briles fired, along with important reporting done by media outlets like ESPN and Texas Monthly, every university in the country should be looking in the mirror and taking steps to ensure that what happened at Baylor won’t happen to themselves, regardless of how rosy things might appear in the moment.

The mistake is thinking that what happened at Penn State, what’s happening at Baylor and what may happen at Tennessee isn’t or couldn’t be happening anywhere. It’s not just players that need better education and awareness regarding sexual violence; it’s the coaches who see it as their job to educate their players yet so often fall short of doing so; it’s the fans who believe that bad things happen only at rival schools; it’s the writers and reporters who are quick to move on to other topics.

* Baylor Is Full Of Shit, via Diana Moskovitz:

You can read the second so-called report, the Board of Regent’s “finding of fact,” here. It contains almost no facts; it has no names, no timelines, no dates, no specific examples; and it has no quotes from anyone who was interviewed or selections from emails or documents that were cited. Yes, it levies some horrifying allegations—that administrators discouraged people from reporting, that there was a failure to respond to reports that were levied, and that in one case “those actions constituted retaliation against a complainant for reporting sexual assault”—but it doesn’t address them in anything more than the broadest possible language.

Who retaliated? Was it a member of the athletics staff? Was it physical or verbal? More broadly, who decided that athletics could handle sexual-assault reports internally, which goes directly against what universities were told in 2011 regarding Title IX—that complaints “must not be addressed solely by athletics department procedures”? You won’t find any of this information in either of these non-reports.

Having names matters. Who did the cover up? Was it the head coach? His assistants? The waterboy? How often did this happen? Did they know it was wrong or were they genuinely never educated in the law? Did anyone ever intervene? Did they take action to suppress the information from their supervisors? The public? How widespread was all this?

If the reports’ purpose was to inform the public about what happened here, they failed; if their purpose was, as perhaps it may have been, to get right-thinking sportswriters issuing outraged tweets and columns about how Baylor had diligently investigated itself and found itself wanting, as laid bare in searing reports, they succeeded.