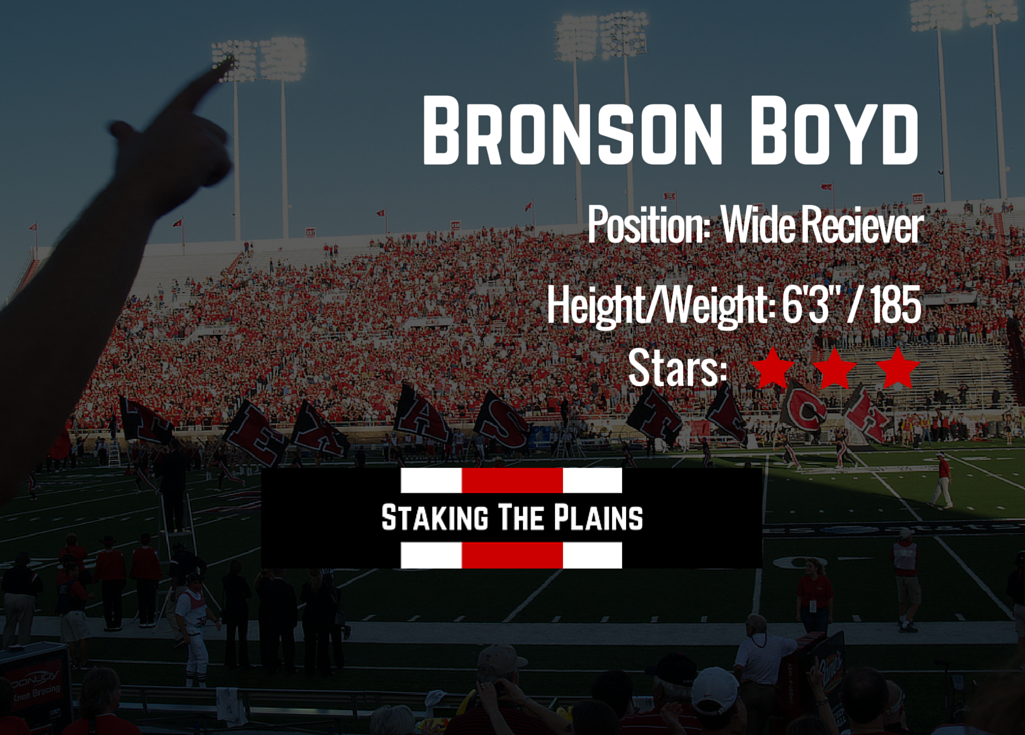 We take a look at Texas Tech’s newest commitment in wide receiver Bronson Boyd, including quotes and highlights from Boyd.

The Player Speaks: Rivals’ Matt Clare talked with Boyd about why he switched his commitment from Houston to Texas Tech, essentially that he choose too quickly and didn’t think it out, but his mother also is a recent graduate for Texas Tech. After Boyd released his top eight teams, he felt that receivers coach Emmett Jones was a huge factor for Boyd:

“When I released my Top 8, Coach Morris started calling and messaging me every day,” Body said. “He called me and we talked for a while about how much they wanted me at Texas Tech. I even spoke with Coach (Kliff) Kingsbury and he was saying all of the same things.

“That made me feel great, made me feel really wanted, plus Coach Jones is like a father to me. He treats me like a son and is always talking with me about all the stuff outside of football. My trainer knows him personally and he is probably the coolest coach recruiting me. Him being a Dallas guy and me knowing his background at South Oak Cliff makes it an even better fit.”

There’s lots more there, so go check it out.

Scouting Report: Boyd caught 60 passes for 1,143 yards and 8 touchdowns, which averages about 19 yards a catch. Boyd’s an interesting prospect that plays up and down the line of scrimmage, both inside spots, both outside spots and does a little bit of everything. You get the feeling that Oakridge uses Boyd take advantage of matchups, depending on the matchup, they’ll use Boyd to exploit various deficiencies in the defenses. You don’t get a really great idea as to his body control or his ability to jump and go up and get the football. Still though, at 6’3″, you’d think that this sis something that Boyd will grow into at some point.

I’m not sure about how Boyd projects, but you would guess with that frame he has a ways to grow. That’s always the thing about these things and from an outsider’s perspective, I have a tough time distinguishing between Jalen Reagor and Boyd. Reagor put up about the same catches and yards for Waxahachie, but did have 5 more touchdowns. My eye isn’t good enough to tell me the difference that much between the two, but obviously, with Reagor being offered by everyone under the sun, there’s something that I’m missing.

Bronson, welcome to Texas Tech and Git Your Guns Up!