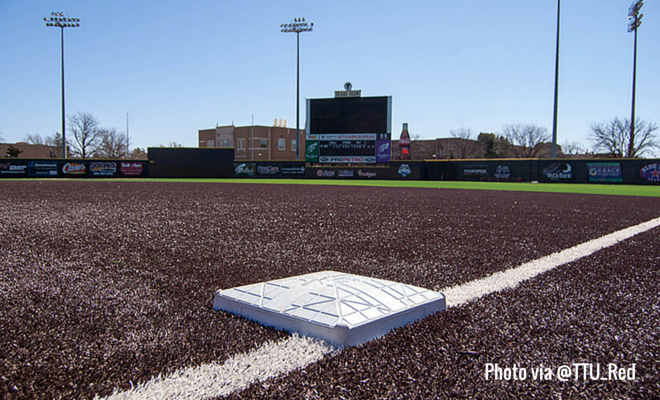 The Red Raiders receive their Big 12 trophy today and they host the Mountaineers for the final Big 12 series.

West Virginia is ridiculously hot. They split 2 of 3 against Baylor, winning on Friday and Sunday, with that Sunday win, West Virginia has won 10 in a row, including sweeping Texas, a series sweep against William & Mary as well as wins against Virginia Tech, Maryland and Pitt. I think I keep writing this over the course of the season, but West Virginia is a pretty good team, again, fairly comparable to Texas Tech in terms of ERA as well as slugging percentage.

D1Baseball has their weekly projections and Texas Tech is holding steady with the No. 6 national seed, which would ensure Texas Tech having home field advantage for the regional site and the super-regional for the next round if Texas Tech makes it past that initial round. The weird thing is that D1 Baseball seems to still be hesitant to give Texas Tech that national seed, almost as if they haven’t really earned it as of yet. Winning the Big 12 would seem worthy, but they haven’t cemented Texas Tech’s spot just yet, which I find a bit odd.

Davis Martin got the start, but not the win, going 5.1 innings, allowing just 1 hit, 1 run, but walking 4, and striking out 1. Martin was in a bit of trouble in the 6th, a walk and an error and in comes Hayden Howard to induce a double-play and things were relatively quiet for West Virginia for the rest of the way. Howard won his 8th game of the year, 8-2 on the year, and Ryan Moseley earned his 3rd save. Texas Tech only managed 2 runs in the 7th, starting with a walk by Michael Davis, who ended up scoring on a Tyler Neslony single and then Neslony scored on a passed ball.

Make sure and watch the highlights for the terrific grab by Tanner Gardner to save a run, the double-play started by Howard and the passed ball that scores Neslony. Exciting stuff.

Another really terrific game for the good guys. Texas Tech found themselves down early again, only to come back again in the 7th inning, largely because of a Hunter Hargrove 3-run home run that also scored Cory Raley and Tyler Neslony. Steven Gingery went 6 innings, giving up just 4 hits, 2 runs, walking 1 and striking out 5, although he did have 3 hit batters. Robert Dugger got the win, moving to 4-0 on the year, while going 1.2 innings and allowing 4 hits, while Ryan Moseley earned the save, his 5th of the year, while going the final 1.1 innings. And this is a game where West Virginia starter Chad Donato dominated until he just got tired in the 6th inning. Donato had 101 pitches and again that’s the big thing with Tim Tadlock, he won’t usually extend guys, no matter the situation. It’s almost always 85 or so pithes for the starters.

And make sure and stick around for the Hargrove home run on those highlights.

Very much a back and forth affair for Texas Tech and the bullpen faltered late as West Virginia salvaged one game from the three game series. Ty Harpenau went 3 innings, giving up 6 hits, 4 runs, 2 walks and 3 strikeouts. Little surprised that Ty Damron didn’t get the start here. Dalton Brown and Jacob Patterson combined in the 4th inning and allowed 2 runs. Ryan Shetter pitched the 5th inning, giving up just 1 hit and striking out 2. Erikson Lanning pitched the 6th inning givingup a run, which tied the game and Hayden Howard pitched 2.1 innings, giving up 2 hits a run and took the loss. The offense had 13 hits, including Tanner Gardner going 3-5 and Eric Gutierrez also going 3-5 with a home run and an RBI. Orlando Garcia was 1-5 with a home run and 2 RBI while Hunter Hargrove was 1-4 with 2 RBI.