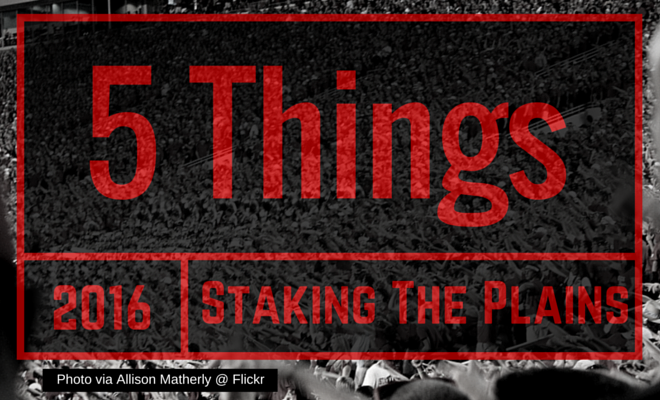 We look at five things we learned about this defense this spring.

1. Banks and Polite-Bray Starting at Cornerback. I have been somewhat hopeful that D.J. Polite-Bray could be a guy that makes a move, but was not all that confident on Paul Banks III being a starter. It appears, at least as of right now, that Banks and Polite-Bray are your starters at cornerback with Tevin Madison likely backing things up and Justis Nelson at the nickel spot. If and when Nigel Bethel returns, then this group looks a lot deeper in terms of talent. If not, then the freshmen are going to have to play, and play early. Oh, and this isn’t an indication that I think that the cornerback spots are all sewn up, but I wouldn’t have figured that Banks was in the mix prior to this year and now it looks like he’s starting.

2. Will This Group be More Athletic? Head coach Kliff Kingsbury said that this group of defenders is more athletic than last year’s group. I think a large part of this is at the defensive ends, where I do think that Hill and Moore will be upgrades athletically and I’d imagine that with D’Vonta Hinton and Dakota Allen maybe being in year two, that they’re not so hesitant with where they need to be defensively. Reacting more than reading. Without having seen any bit of significant practice, I’d tend to think that Kingsbury isn’t just saying this for grins and giggles. Athletically, I do think that the upgrades on the edge will be significant, although you wonder if it’s a wash athletically in the secondary if Payton Hendrix replaces J.J. Gaines. I think Hendrix has more athleticism there, but I haven’t seen a ton of Hendrix just yet.

3. Hendrix Over Ward. It is a bit of a surprise to see Payton Hendrix getting the nod over Keenon Ward, at least right now. Theoretically, Hendrix should be able to cover more ground that Ward, but Hendrix lacks any significant playing time. I’m glad that Hendrix is panning out and have been waiting for him to emerge. He had everything you could have wanted in a safety. Size. Length. Just enough speed. But Hendrix couldn’t start over Ward or Gaines or whoever else played last year. I’d be interested to see how the second team shakes out because I’m still confident that Christian Taylor is going to be very good for this team in some form or fashion.

4. Not a Lot of Noise About that Third Linebacker. This goes a bit into the question about whether this team is more athletic or not and we never really heard much about the third linebacker, other than Malik Jenkins cross-training between all three linebacker spots. I thought for sure that Jamile Johnson would be the starter there are the end of the spring camp, but I haven’t heard his name mentioned much at all. Jacarthy Mack is a guy that Kingsbury said that they want to figure out a way to get him on the field because all he does is make plays, so maybe this is Kingsbury’s way of letting us know where he’s leading on that third linebacker position.

5. Gary Moore to Rush Defensive End. This was the biggest and most pleasant surprise of the spring camp, which is that Gary Moore was moved to the rush end or linebacker spot. It always troubled me that Moore would be backing up Branden Jackson at the strongside defensive end position and Moore wasn’t big enough to do it. I think part of the problem was that Talor Nunez was hurt and left the team with very few options. With Moore at 240 or so, that’s plenty big for that rush end position and I love his height that adds a factor to his pass rush abilities. And Moore always played like his hair was on fire, and maybe that works better at the rush end spot.