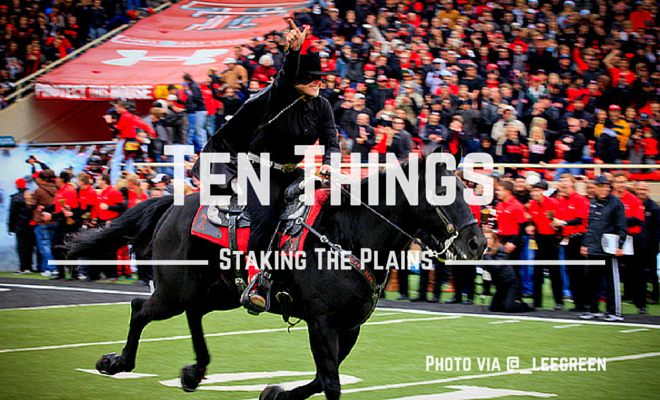 1. Coverage of the Midland Scrimmage. I usually don’t complain all that much, but I was pretty disappointed not to see more highlights from the official site. This 1:47 package was it.

2. Post Scrimmage Pressers. We did get some post game pressers from head coach Kliff Kingsbury and Mahomes.

Nothing huge from Kingsbury. Kingsbury said he didn’t like the penalties, and there seemed to be way too many false starts (just reading between the lines). Said that Stockton has been great and we’d be talking about him more if it wasn’t for DeAndre Washington. Same thing with Cameron Batson, who has been behind Jakeem Grant, but has been really good all spring. I think it was Chuck Heinz that asked if Derrick Willies was in trouble for dunking on the goalpost and Kingsbury shut that down, said that he wanted them to have fun. And last, but not least, Kingsbury said that he’d still be playing right now if he could do what Mahomes does.

That’s awfully pretty and gives you a sense of QB Jett Duffey’s arm and WR Derrick Willies ability to catch. This could be a really fun year.

4. Quotes. The official site had some quotes (PDF) from Kingsbury, Mahomes, DL Talor Nunez, LB Dakota Allen, and LB Luke Stice. Stice, if you recall, was the fullback from Houston that transferred and is now playing linebacker for Texas Tech.

5. Additional Highlights. I liked the highlight package from KAMC in terms of highlights. You get to see the pass that Mahomes uncorks to Batson. The pass is unreal.

6. Stockton and Batson Rise from the Shadows. LAJ’s Nicholas Talbot writes about how RB Justin Stockton and IR Cameron Batson may finally be able to shine after playing behind two senior standouts, DeAndre Washington and Jakeem Grant.

Batson had five catches for 83 yards and a touchdown and Stockton only had three carries, but he made the most of them. The junior from Cibolo Steele rushed three times for 44 yards and two touchdowns.

His first touchdown came on the second series on an 8-yard run. He late scurried up the middle and broke free for a 32-yard touchdown run. Kliff Kingsbury and his staff have believed the junior should be a more than capable replacement for DeAndre Washington, who ran for 1,492 yards last season.

“(Stockton) has been great ever since he stepped on campus and if it wasn’t for DeAndre everyone would be talking about him already,” Kingsbury said.

7. Newcomers Arrive. Also from LAJ’s Nicholas Talbot writes about how WR Derrick Willies and QB Jett Duffey connected (it is included in the official site’s highlights) and also writes about the offensive line, which had Terence Steele at left tackle with Tony Morales at center and Baylen Brown at right tackle, but also had Madison Akamnonu and Paul Stawarz getting in some reps:

But, the Red Raiders also worked in Madison Akamnonu at right guard and Paul Stawarz at left guard. Akamnonu will more than likely start somewhere and could switch positions with Brown.

The last spot along the line Saturday belonged to Stawarz, who could be displaced by Justin Murphy once he is healthy. Also getting a look is Robert Castaneda.

“Steele has the work ethic and the size and all the things you’d want and we expect him to be one of those starting tackles, but we don’t know which one yet,” Kingsbury said. “We are trying to find that fourth and fifth piece. A bunch of guys are battling. It will be a good battle the rest of spring camp.”

8. Midland Supports Texas Tech. I mentioned yesterday how Texas Tech has been overflowing in his praise of the experience that is the Midland scrimmage and Midland responded. Midland Reporter-Telegram’s Oscar LeRoy writes about the Midland crowd:

On Saturday, an estimated crowd of 6,000 showed up watch the Texas Tech football team conduct a controlled scrimmage at Grande Communications Stadium.
The crowd showed their enthusiasm, their spirit and of course it helped to have almost ideal conditions on the afternoon.
That support is not lost on the organizers of the annual event and those from Texas Tech University, who have made it a point to make Midland an annual stop for its football and baseball teams.
“Every year we come, it exceeds our expectations,” said Texas Tech football coach Kliff Kingsbury after the scrimmage. “(The crowd showed) incredible energy and it’s a real honor to be able to come down here every year.”

9. Smith Gets a Look. OAOA’s Royal McGregor writes about how Des Smith had an opportunity to take in the scrimmage yesterday:

“That’s just going to make us better going against one of the top offenses in the country,” Smith said after the spring practice. “It’s definitely something to look forward to. That’s the reason I picked to play at Tech. I want to play against the best and I want to be the best.”

Despite the Red Raiders returning seven defensive backs with at least one start last season, their head coach Kliff Kingsbury believes Smith can have an immediate impact.

“We like (Smith) a lot,” Kingsbury said. “He’s a tough-nosed kid. He’s very physical. He works hard and has earned everything he has gotten. You know that when you meet him. We expect him to come in play. We don’t think he’ll redshirt. We’ll find a role for him and throw him out and let him do what he does best.”

10. Love Your Input. If any of our Midland STP’ers can give us an official review in the comments, I’d love to hear it. The only thing that I’d mention is that in reviewing the defensive line, there just isn’t any depth, so I’d be very interested to know how they rolled out those rotations.