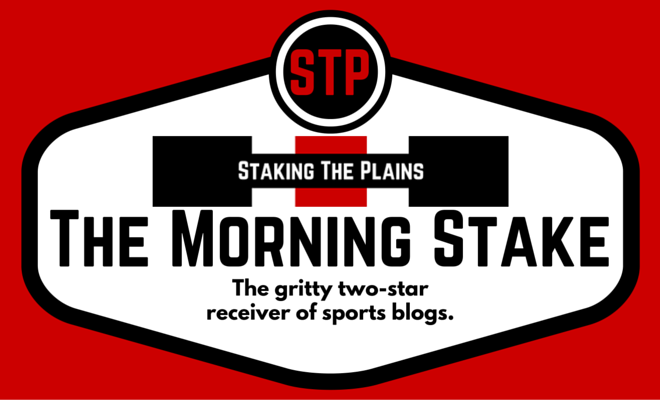 The tennis teams are in action this weekend. The baseball team is picked to finish 5th and Louis Vasquez is playing in his second Super Bowl.

Cincinnati May Be Hiding Something. Interesting post from Cincinnati Enquirer’s Tom Groeschen who made an open records request from Cincinnati regarding any dealings with the Big 12 and before they have not been delivered to the newspaper, but instead, the Board of Trustees has demanded them before being sent to the paper:

But withholding the documents raises questions about transparency at a public university, which has an annual budget of $1 billion and is the largest employer in Greater Cincinnati. It’s also a potential violation of state open records law.

The decision to withhold the documents comes as Big 12 Conference officials and member university presidents and athletic directors are scheduled to hold their annual meetings later this week. Officials are expected to discuss expansion, according to the Sporting News and other media outlets. UC often has been mentioned in media reports that it could be invited to join the league.

“We are concerned that these records have been so hard to come by,” Enquirer Editor Peter Bhatia said. “Our goal is simply to tell the story of UC’s process with the Big 12. It is an important story for Cincinnati and the university.”

The Enquirer asked UC to release travel records for Ono, athletic director Mike Bohn and other top administrators, specifically for trips taken to meet with Big 12 Conference officials and the 10 member schools since Oct. 1, 2014. The Enquirer also requested emails between Ono, Bohn, other top UC administrators and officials with the Big 12 Conference and each of the league’s member schools.

UC also was asked to release any videos, brochures, presentation materials and other documents produced for purposes of promoting the university to the Big 12.

On Dec. 15, UC attorney Katherine Miefert told The Enquirer the university was working quickly to gather the documents and had no intention of withholding the records from the public. In January, however, UC officials stopped returning messages from The Enquirer about the records request.

As an aside, DMN’s Chuck Carlton writes that the Big 12 met yesterday and essentially accomplished and said nothing. In fact, the Big 12 has hired a Chicago firm that is crunching numbers to determine whether or not to expand and have a conference championship game. So now, the Big 12 is into analytics.

Good luck to our Lady Raiders as they travel to the ITA National Indoor Championship. #wreckem #ITAindoors pic.twitter.com/Ii337gChoM

Vasquez in Super Bowl. ESPN has a story on Louis Vasquez playing in his second Super Bowl in three years:

Like many Hispanics in the United States, Vasquez grew up in a football culture, but it was football where feet passed a round ball. Vasquez, who is in his seventh season in the NFL, grew up in a Mexican family in Texarkana, Texas, a town located about 180 miles northeast of Dallas. He began playing soccer from a young age, but soon realized that it was difficult for him to progress. It was at school that he became convinced that he might be better off playing American football.

“I was always very big,” recalls the 28-year-old Vasquez, who stands 6’5″ and weighs 335 pounds. “I started playing and did well… I went to Texas Tech. Now here I am a few days away from playing in another Super Bowl and hoping to win a ring.”

Baylor Fallout. I’m like a lot of you in that I don’t think anything is going to happen to Baylor, but here are two hot-fire posts, one from FWST’s Mac Engel:

I spent Tuesday on Baylor’s campus and found the place effectively on lockdown. Few would talk on the record about the latest report. This included scores of “Sorry, can’t help you” from professors, students and seminary school employees.

“Knowing this school, no one is going to talk to you,” one professor told me.

I was normally pointed in the direction of a “media services” professional whose function is to be helpful while not helping and to provide a smile and a well-crafted press release. The one I received was 474 words long and says Baylor is concerned about the safety of its students.

People are scared to talk about this, which is frightening and a clear sign the football program and its head coach have too much power. There is no transparency.

The one university professor who agreed to talk to me did so on the condition of anonymity; he has been at Baylor for more than 30 years, is over 60 and tenured.

“The athletic department is totally divorced from the rest of school,” the professor said. “But one of the things the faculty talks about is maintaining the Christian ethos of the school while being a top-tier university.”

And a second post from CBS Sports’ Jon Solomon:

Your university, Ken Starr? It has stayed silent. You addressed your students Wednesday night in an email. You said Baylor can’t provide more information on specific cases because it is protected by federal student privacy laws and that commenting would hurt the integrity of the ongoing investigation by Pepper Hamilton law firm.

“We acknowledge and appreciate the tremendous courage these women demonstrated by coming forward to share their experiences, and to continue to raise consciousness and awareness about these critical issues,” you wrote. “Their voices are important, and their perspectives help to inform positive steps to enhance campus responses.”

These are words. Your students and alumni want more. “I keep getting emails saying we care, we care,” Baylor graduate Stefanie Mundhenk told The Baylor Lariat, the student newspaper. “Their actions do not follow their words. He is not spending time to actually address the issue. He is not writing an email to me actually trying to address the issue.”

This was part of your email last September, Ken: “Some have concluded that we could have done more. Perhaps so. Our independent investigation will soon reveal if opportunities exist for improvements in the way we respond to allegations of sexual violence. But I retain full confidence in our Student Life professionals.”

Given the latest ESPN story, it strongly suggests Baylor didn’t take seriously the Elliott rape case several years ago. Otherwise, how do you explain why Baylor so poorly handled its Title IX investigation of Ukwuachu that a trial judge wouldn’t even allow him to use it as a defense?

How is it possible that Baylor conducted a university investigation, which has a much lower burden of proof than a court of law, and found Ukwuachu did nothing wrong yet a jury found him guilty of rape? “(Baylor) didn’t have someone that seemed to know anything about how college rape occurs,” McLennan County Assistant District Attorney Hilary LaBorde, who prosecuted the Elliott and Ukwuachu cases, told ESPN.