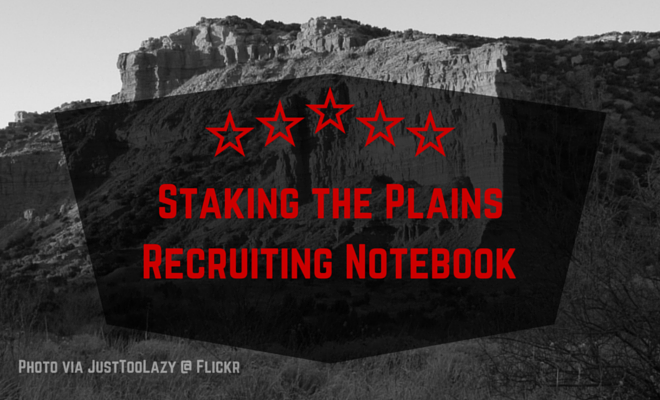 We wrap up what the media had to say after Texas Tech finished up their National Signing Day.

LB Matthew Anunda (5-10/200): Anunda was apparently the 6A defensive player of the year at Arlington and his best offer is Southeastern Oklahoma State. Watch this video.

DE Kirby Vinson (6-3/240): An edge rusher from Lubbock Cooper who makes a ton of plays.

RB/IR Ethan Davidson (5-10/175): A running back from the same high school at Jordyn Brooks. I could see Davidson playing inside receiver.

QB Colt Garrett (6-2/185): From Roosevelt in Lubbock, a really good athlete that will play quarterback with Texas Tech.

Kingsbury at the Dallas Recruiting Review.

Also from the FWST Kingsbury talked a bit about Houston Miller and also Jett Duffey:

“When I first met Jett he was 5-[foot]-9, a sophomore,” Kingsbury said. “We thought ‘well, he can really spin it, but I don’t know if he’s going to be big enough. But he grew [6-foot, 180 pounds], and we’re thrilled to death … and to get him here early in our offense and in our training.”

Skyline Stays Together. DMN’s Corbett Smith writes about how three Skyline players all decided to stick together and sign with Texas Tech:

“It’s crazy, but we knew this was going to happen, honestly,” Wallace said. “We all had the ability to do that, and this is what we wanted to do.”

In total, Skyline had 20 football signees.

Kevin Moore is the kind of versatile weapon defensive coordinator David Gibbs would enjoy as an outside linebacker or defensive back. Although there aren’t many openings at either position, Moore could challenge some familiar faces to work beyond their comfort zone to keep the incoming three-star product of their backs. As a starter or a rotating defender, Moore will help this defense and could see early playing time as a result.

Jackson was a major force on the Amarillo High defense each of the past two seasons. Defending against both the rush and the pass, Jackson collected 73 tackles and nine sacks as a player opposing offenses needed to account for on every play.

That kind of performance got the 6-foot-3, 255-pound Jackson noticed by Tech. Jackson verbally committed to Tech before Amarillo High’s season started last fall, and when the Red Raiders showed interest, other schools didn’t need apply.

Tech remained just as devoted to Jackson as he was to the school. He’ll also be playing defensive end for the Red Raiders.

Jackson doesn’t think there are going to be plans to redshirt him and that he could have a role on the field next fall.

“(Tech defensive line) coach (Kevin) Patrick told me to be ready to play,” Jackson said. “We haven’t talked about redshirting. We have amazing talent coming in and we’re going to change the program.”

Thinking About 2017. RRS’s Matt Clare is already thinking about 2017 and has a list of players that Texas Tech is looking at for that class.

Much respect to @TTUKingsbury and all the new signees at Texas Tech. #NationalSigningDay #dreambig pic.twitter.com/hMAR6xcNIz