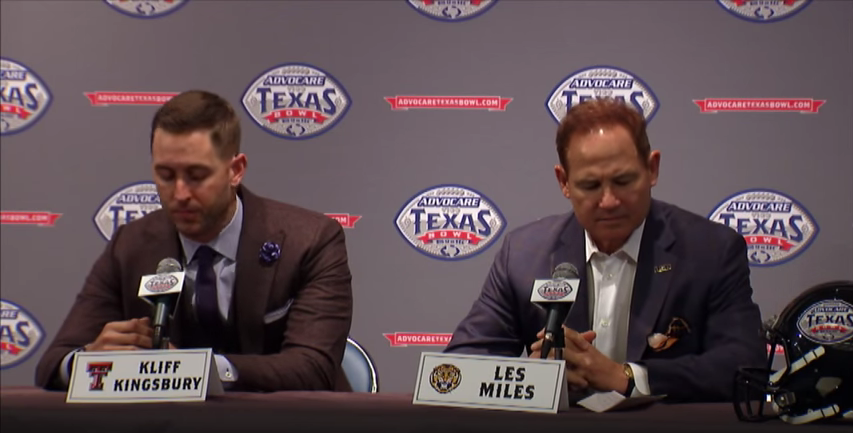 Texas Tech head coach Kliff Kingsbury and LSU head coach Les Miles met with the media in Houston yesterday. This was somewhat of an introductory press conference, which you can view in it’s entirety here.

There was a lot said, but there wasn’t a lot “said” if you get my drift. From what I could tell, there were only a couple of reporters at the press conference and Miles said that he knew he was coming to Houston to recruit, but when he got off the plane, he realized it was a press conference. Check out the responses from each coach on the same question:

What’s the benefit of playing in a bowl game or a neutral site game in Houston?
Les Miles: “We recruit here. I have to be very honest with you, I got off the plane today and realized it was a press conference. I knew I was going to go recruiting here. That happens after we leave. We have a tremendous fan base here. I can’t tell you how many energy, petroleum industry executives that LSU has right here in Houston and not only our fan base, but we draw a lot of students from Houston, so this will be a very nice trip for us, certainly the venue, the NRG Stadium, the AdvoCare Texas bowl, is exactly the style of bowl we would want to be in. It is right directly in the mainstream of our recruiting and fan base and the population that comes to our school. We are thrilled to have been here before, recognize the hospitality that (Chairman of the Board of Directors for the AdvoCare V100 Texas Bowl) Chris Hanslik and that staff will be a part of. We are excited and this is a tremendous opponent, talented football team, second in the nation offensively, talented quarterback, great running back and defense that plays very sound and over the top, so we recognize really in short order that Coach Kingsbury has done a great job and we are going to have to play well.”

Kliff Kingsbury: “Yeah, very similar, incredible recruiting base here as well as huge alumni base here, to play a top 20 team from the SEC, a premiere program like LSU has been under Coach Miles is a huge

Kingsbury and Miles acknowledge that these extra bowl practices help the program:

What’s the one thing you guys take away from these extra bowl practices?
Kliff Kingsbury: “For us, just like any other college, I think your young guys that have red-shirted, that have really been doing scout team type duties and repping other people’s plays, now you get to coach them. Now you get to get them started moving into spring football with your terminology, how you coach, how you work, so those are invaluable practices and having not gone to a bowl game last year, it’s huge for us to get back, get our young guys developed and continue to move them forward.”

Les Miles: “The opportunity to practice some of those guys, in what we call young guys go, where they can line up against each other and get after it and run our plays, just puts them in great position for, if you look at it, spring ball is 15 practices and you are basically, you are not quite 15 practices here, but very close, so it’s an added spring. It’s very important to us and we are very fortunate to have the ability to be there annually.”

Both coaches were also asked about how their teams improved through the season:

How would you say your team improved as a unit throughout the season?
Kliff Kingsbury: “For us, I felt we started the season fairly strong, 3-0 in non-conference, played Baylor and TCU going into conference when they were hot and playing very well and then battled through, but by the end, I think the last two games, played our best football and felt like that is what we wanted to do and have a month to continue to try to get better and play one of the best teams we will have played all year. I like where we are at, but know that it is a big challenge ahead of us.”

Les Miles: “We are a team that has some youth and we started a couple of young freshman on the offensive line. I felt like they developed all year long. I think it’s an interesting thing, we have lost some guys at midstream and we were 7-0 and in really good position and we find ourselves starting guys in key contests that just didn’t have a lot of experience, the good news is they have grown up, they may have been playing as freshman then, but there are certainly sophomores or juniors today and we feel like we are in position as well to play our best football.”