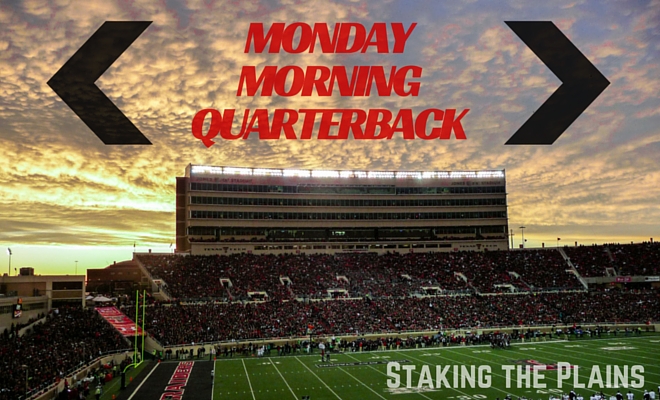 5-2, one win away from bowl eligibility. Let’s dive in to Saturday to look at 2 different stats and 1 Tech hero

Well, you know what they say. One doesn’t simply walk into Lawrence and expect a win (that’s totally what they say, don’t ruin this for me). The offense just couldn’t put it together at any point, the offensive line was. . . porous, and somebody put kryptonite in Pat’s wristbands. The good news is that, as we’ve come to expect, the Texas Tech defense was there to keep Tech in the game and save the day.

It was a weird Saturday.

Today we’ll look at the tackles-for-loss seen in the game, 3rd down conversion rates for both teams, and Jah’Shawn Johnson’s heroic game.

Michael_LSRR — Defensively, Tech held their own. Between sacks and tackles for a loss, the Red Raiders pushed Kansas back 33 yards. I think most would agree that the offense struggled, and struggled could be putting it lightly. Le’Raven Clark was sorely missed as Kansas racked up 5 sacks against our offensive line. Oddly enough, the last time Kansas had 5 sacks in a game was against the Red Raiders in 2009. I’m sure we’re all hoping Le’Raven has a speedy recovery.

Brian — It was bound to happen eventually, and I’m surprised it’s taken this long, but goodness was it jarring to see Pat Mahomes look like merely an exceptional human. Losing Justin Murphy at right tackle was definitely a loss, but things completely changed when Le’Raven Clark went out. The offensive line just had no answers for the Jayhawk’s speed on the edge and their stunts, and neither did Mahomes, which lead to 5(!) Kansas sacks. With OU and Eric Striker looming next Saturday, this is something that absolutely has to be figured out this week, because you can bet your bottom dollar that Bob Stoops has already taken notice of what Kansas was able to do to contain the offense. The good news is that Lee Hays is your Red Raider OL coach, and if there’s somebody up to the task, it’s definitely him.

As for the defense, it was fantastic to see the defensive line have a truly disruptive game behind the line of scrimmage (6 TFL, 2 sacks). They were able to put some pressure on a true freshman QB, finally notch another multi-sack game, and all of that eventually lead to Johnson’s game clinching pick-6. This is the kind of play Tech will need from the line the rest of the season to really give them an edge.

Michael_LSRR — Last week, I gushed about the 73% 3rd down conversion rate on offense. Feel free the put me in on the jinx that dropped it down to this week’s less than ideal 43%. With Clark going down and the offense just in a general state of endless funk, we were pretty fortunate to get out of there with a win. The defense held up their end of the bargain, and just like the last game against the Cyclones, I think everyone is pretty pleased to see a 33% conversion rate on that side of the ball.

Brian — For as great as the offense was on 3rd down last week, it was just as bad this week, only converting 9 of 21 3rd downs. The good news is that we’ve seen enough of this squad to feel that this isn’t very indicative of what we can expect, but I really hope that Clark is able to come back from injury and that Kansas didn’t just put up the blueprint for how to stop the Texas Tech’s Rolling Death Machine Offense™. As for the defense, this is the second week in a row that they have posted a sub 40% 3rd down conversion rate, a trend I’d love to see continue. I know we can all say “but ya, it was against Kansas,” but given what the Jayhawks just did on Saturday, it’s a good reminder that you can’t take any team for granted.

Michael_LSRR — This was, obviously, another big day for the red shirt freshman. During the Arkansas game, he had 16 tackles and a fumble recovery among his laundry list of accolades. Coming up big against Kansas with the pick-6 in just the right moment helped to finally stifle the comeback that might have been. Johnson also had a tackle for a loss. That’s always an especially impressive play to me when a safety lands a tackle behind the line of scrimmage. Tech is fortunate to have him for a few more years

Brian — Seth touched on it in the 10 Points on Sunday, but goodness does it feel like we have something good in Johnson. Through seven games, the safety has had 1 pick, been in on 50 tackles, 4 tackles for loss, and has forced 2 fumbles. He’s not afraid one bit to stick his nose into a running back, and when he hits, you can hear it through your TV. His interception on Saturday was excellently played, but to completely reverse field on the return to get it into the score was huge. Gibbs’ tutelage can help ensure this is more than a flash in the pan, and I know many of us have been craving a defender that can put a little fear in the opposition since one Dwayne Slay prowled between the hashes at the Jones. In a secondary that has been less than stellar this season, Johnson is definitely encouraging.