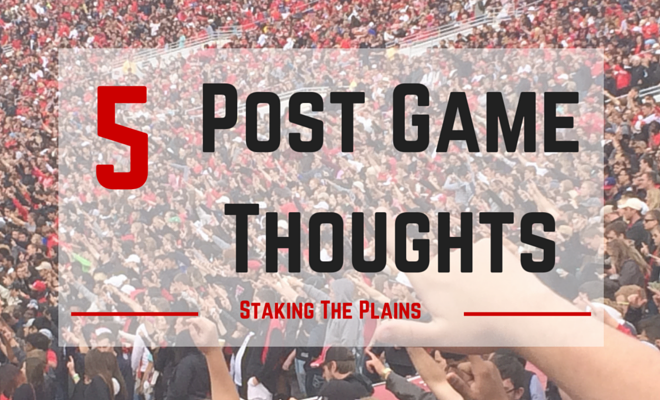 Texas Tech squeaks out a 30-20 win against the worst team in the Big 12 in the Kansas Jayhawks.

1. The first half was . . . uninspired, and maybe you could say that about the entire game. When I saw Kingsbury and Gibbs celebrate one of the missed field goals, they were as excited as I’ve seen and that seemed to be the extent of the excitement. I don’t know if that’s on the team or because of the early kickoff, but that was a rough half to watch. Maybe the other part is the lull that happens when a team plays Kansas. The team didn’t look ready to play from the beginning and I don’t recall a time that happened.

2. That zone coverage looked pretty tough for Patrick Mahomes. It could have been a bit worse had some passes dropped the wrong way. I think this is something that Mahomes will have to work through and one of the tougher things to do, but opposing teams will attempt to utilize similar coverage. Texas Tech’s offensive line gave up two coverage sacks and Mahomes usually sees everything.  The fact that he had very little time to do much of anything in the second half made it even worse.

3. Losing Le’Raven Clark for even a little bit of time is terrible. The offensive line was overwhelmed by the Kansas pressure. Mind you that Kansas was down to 3 defensive tackles. Get well soon Le’Raven.

4. Even after getting whipped by Baylor, I feel terrible after this win and this was about the worst that I’ve seen this team play this year. As mentioned above, the first half was uninspired, and after Clark went down, the offense couldn’t muster much of anything. If Kansas could hit a few field goals, they very well could have won this game. It was way too close. This team better improve because Oklahoma is going to bring it next week.

5. Perhaps the brightest spot was the interception by Jah’Shawn Johson to put Texas Tech up by 10 points. I wrote in my notebook that on the offensive possession prior to that interception, that the offense needed to score there. The offense was in disaray and luckily, Johnson made a terrific read and play to score. He very well could have gone down and play it safe, but he cut it back up the field and scored.