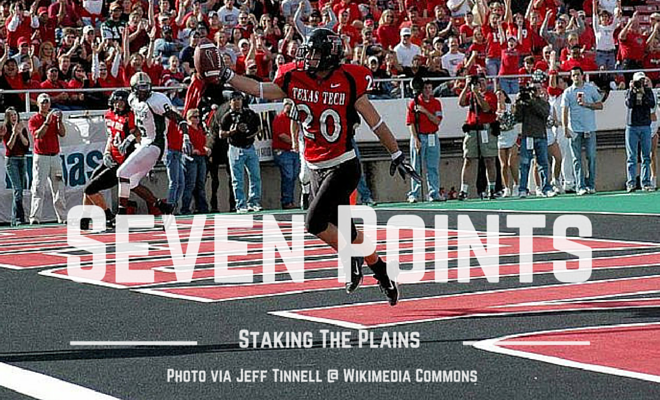 It’s our weekly close look at the game between the Texas Tech Red Raiders and the Kansas Jayhawks, complete with graphs, charts, and a breakdown of plays.

I’d expect Kansas to run the ball quite a bit, because that’s what they’ve done this year. Kansas has run the ball 40 times a game, and it’s actually 45 times a game when they play at home, where they average 182 yards a game. Now, lots of those yards came against the non-conference opponents. That means that Allen is going to get a ton of work. In fact, even against Baylor where they only averaged 1.7 yards a carry, Kansas still ran the ball 39 times. Allen’s biggest problem is lack of consistency and that takes time, but eventually, he should get there because he is blessed with the athletic ability to make plays. If Allen, Micah Awe and D’Vonta Hinton make plays on Saturday, the defense is going to do very well.

Thanks to Football Study Hall (where there are more stats than just these, so make sure and check them out): Texas Tech’s profile and Kansas’ profile.

The advanced metrics are certainly on Texas Tech’s side of things, the worst part about the Texas Tech offense has been the fading return game, and it has been fading over the weeks (that’s the field position metric). I’d love to see that improve for Texas Tech.

These two units are relatively equal in terms of what they haven’t been able to do, stop opposing offenses or impose their will on opposing defenses. Traditional metrics show that Texas Tech clearly has the dominant offensive team and Kansas is struggling on the defensive end, largely because of injuries, but also because defense is tough in the Big 12. This is what concerns me, is that Texas Tech hasn’t had a good defensive performance yet, at least in terms of yards per game. Kansas has had a rough go on the offensive side of the ball and a freshman quarterback is getting his second start, but it would be nice for the defense to really limit those yards this game. From a conversion standponit, Kansas isn’t very good, although the Texas Tech defense is equally rough.

Point 6: A Look at the Kansas Offense

There’s not a lot of highlight film on Kansas, so this was a bit tougher. The one thing that I do think is that Kansas came out and played with their hair on fire against Baylor. They were excited, and ready to play, they just couldn’t sustain that level. I think Kansas will come out the same way against Texas Tech. Nothing to lose for those guys.

This was the lone touchdown against Baylor and it’s your standard 4-vert play. Willis looks comfortable in the pocket when he has time. The receiver does a nice job of getting behind the defensive back and Willis does a terrific job of dropping the pass to the receiver perfectly. This is actually Cozart making the pass, but what it does demonstrate is that Kansas will go down the field when the opportunity strikes. The receiver gets behind the two safeties. Again, a spread look. Nothing fancy from here. But see how Kansas is using the sideline and a pass that’s been very tough for Texas Tech to defend. Point 7: A Look at the Kansas Defense

Kansas essentially rushes 4 down linemen and I think that’s how they’ll play a majority of the time. I didn’t see a ton of blitzes, which makes sense and is the same thing that Texas Tech does, which is try to mitigate the really bad stuff. Here, Kansas is rushing 4 and dropping everyone into coverage. The cornerback at the bottom of the screen ends up making this play, that’s the true freshman Miller from Michigan and he ends up avoiding the offensive lineman and making a terrific leg tackle on the receiver. Another standard play and it’s a zone read for Iowa Staate and the linebackers are playing a bit closer to the line of scrimmage and pressing a bit. The ball ends up going to the running back and Kansas, as you can see, has done a really nice job of stringing out that play. All of those defensive linemen are pretty much in the correct gap and the play is made Once again, just 4 rush and see how far back the linebackers are (I wish I had remembered to note the down and distance, but I did not. Although I think it was 3rd and 8.). Pretty much every player is 10 years off the line of scrimmage Kansas is just waiting for Iowa State to make a bad play here, which the quarterback does end up doing and pretty much throws it right to a Kansas defender, who runs it back for a touchdown. I’d guess that Mahomes is going to see a heavy dose of zone coverage and tr to lull him into a mistake.