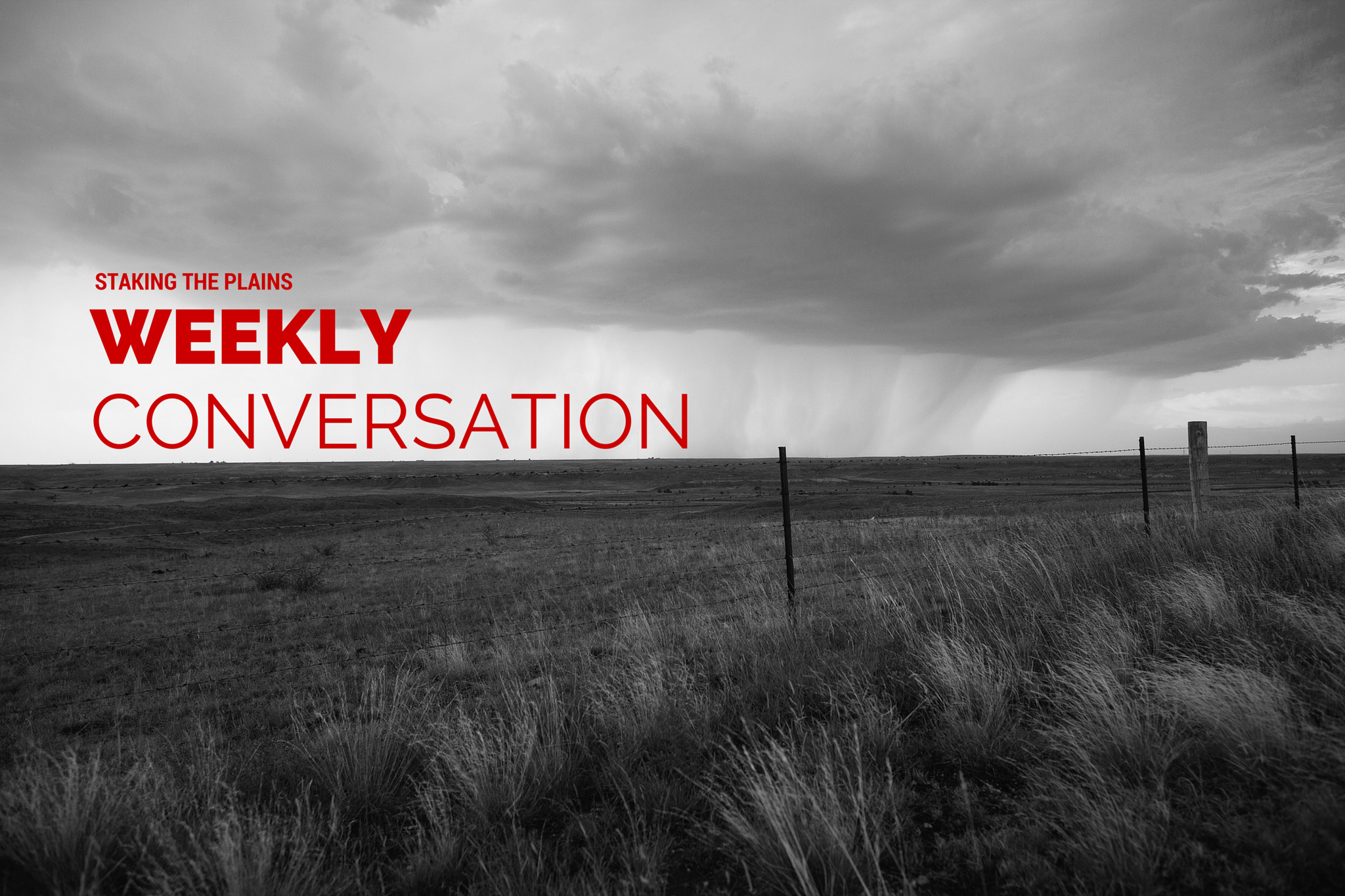 Seth and Travis discuss the UT fan outrage over refs, feeling less optimistic and so much more.

Seth: I thought for sure that your Tuesday article would be about the Texas game and how one Texas fan claimed that racism was maybe the cause of what he felt like was a lopsided game in terms of how the penalties were called.

I guess first and foremost, to allege that racism is a potential call for the bad calls seems to be just throwing anything against the wall and hoping it sticks. It seems that what most UT fans don’t realize is that this sort of poor officiating has been happening in the Big 12 for quite some time.

Not only that, but Jon Bible has officiated a handful of Texas Tech games and he’s actually a Longhorn alum — multiple times over.

Aside from the fact that refs have been biased for quite some time, I think there are three big points here. First, that the Longhorn author decided that race would be a good thing to throw in to muddy the waters on what is really just maybe an official having a bad game. Second, that Longhorn fans have also come out and said that they want out of the conference because it’s rigged, which is terrific because this conference exists because of them. Third, what made you decide not to write the article (or is that being presumptuous)?

Travis: Funny you should mention that because I actually did write an article about it late on Monday night and submitted it to SI. It should run later this week (presumably it already has once our convo is published).

I wanted to save my Tuesday spot for a catharsis on my current fandom, so of course I wrote about water bottles.

But, to your point, it was baffling to see the outcry from UT fans, and what bothers me most is that he blatantly threw a charge of racism out there, and then legions of fans shouted anyone down who suggested that might not be the best route to take considering there is absolutely no evidence of that playing a factor at all. And then their primary defense was, “he didn’t say that, read his words, and did you even watch the game?”

I was out of line by so obviously trolling their community, but thought it was important enough to discuss. The problem was no one was interested in that.

To a larger point though, I finally settled somewhere in the middle of it all. While UT fans are claiming conspiracy and the rest of the schools are laughing their heads off at the suggestion, my thought is this.

If, as so many of us believe, games have been affected by some unseen force that tilted the contest in UT’s favor, then we should be able to see the opposite side of the argument and agree that, for whatever reason, maybe they are now being tilted against them.

I know it’s a strange concept but if we’re going conspiracy, we’ve gotta go all in.

So, with that out of the way, how are you feeling heading into Saturday?

Seth: I can’t figure out a way to stop that Baylor offense other than the defense just playing better and being opportunistic with those turnover opportunities. That seems to be the big thing about how the game played out on Saturday against TCU, which is if Texas Tech had pulled in some of those turnovers then I think we’re talking about a completely different game. The other part that I can’t shake is how healthy Patrick Mahomes is or isn’t, heading into the game. If he’s healthy, then I feel like this team feels like they are Superman and they can are more powerful than a locomotive and faster than a speeding bullet. Without him, I don’t feel like I have that sense of invincibility.

I do need to remind myself sometimes that that defense, despite all that had happened, was the slimmest of margins from winning that game, so I probably don’t need to be so pessimistic about the outcome, but I am pessimistic. Baylor has the best offense in the nation and the key for Texas Tech, I think, will be to limit those third down and limit those big plays.

How are you feeling about the game?

Travis: I’m much less optimist this week than I was last week. Not exactly sure why, but it just felt like everything was in place last week.

And I do have a pretty bad quandary: I dreamed last night that Tech won this week against BU, but I didn’t watch the game. So does that mean I can’t watch Saturday?

P.S. Please don’t tell my wife about this possibility.

And also, we’ve been discussing the possibility of creating an STP app that readers can download to get push alerts and a variety of other updates. Any thoughts you want to share with the class?

You were approached by someone who created an app that is a private social network and they want to let us utilize that app. The idea behind the app is that it’s a lot like Twitter or Instagram in that you can post updates and photos and things like that, and folks can also use a messaging system where you can message everyone or just a few folks or just one person. There’s no character limit, like in Twitter where there is only 140 characters. It will also have the ability to provide notifications The biggest difference is that it is a private network, meaning only the folks that have the code will be able to use the app.

The debate that I’m having is twofold: 1) First and foremost, I never want to take away eyes from the site itself; and 2) this will be somewhat time consuming in that I’ll need to update this app with new content as well as moderate what happens in the app.

I think item 1 is self-explanatory in that if folks are on an app, then they’re not on the site. I am probably way too protective of STP, but I think I’ve always been protective of what has been nearly a decade in the making. I take a lot of pride in what we do here and I don’t ever want to do something to take away from that. I also understand that people are on apps, like Twitter and Instagram and Facebook, all of the time, so what’s the harm in having one more app of like-minded people discussing things. But I suppose that’s part of my problem is that I like for people to comment on the site and comments in two different places is now having to moderate in two different places.

Item 2 is a bit more tricky. From a logistical standpoint, during football season, I pretty much spend every free moment writing. I have my set hours where I’m at work and I have set hours where I don’t even have my phone with me as I try to dedicate time to actual real family time. I don’t like to half-arse this time as I really only get three hours a day with my wife and kid together so I want to make the most of it. This is the reason I get up at 3:30 in the morning and if I have some free time at lunch or when Fitsum goes to bed and the wife is watching Real Housewives of _____, then I’m working. It’s the reason I’m not really active on Twitter or in the comments because at the core of everything I do for STP is to produce the best quality content every day. The things that I sometimes don’t have time for are promoting the stories on Twitter and Facebook, and this app would be one more thing that I would need to promote the work.

At some point, I do start to feel like I’m spreading myself too thin with the site, with moderation, promotion, and all of those things that go along with running a site. On Saturday morning, I finish my morning post and I immediately begin preparing all of the things that I will write the next week for the next opponent. Changing the background colors on the tables, identifying three key players, reviewing depth charts and jotting down starters, key players and making it so that when I get into the week, I’m not having to do all of those things. Despite the sometimes desperate and fleeting feeling I get when I’m writing, I still love it, but I’m not certain if I want to add more to what I already do and if I want to take people away from the site.

I do want to add that thanks to the advertisers that have chosen to advertise with Staking the Plains, I’ll hopefully will have time to send all of our contributors and writers some money as a gift for the work that they’ve done. I’ve never been able to do that before. As of right now, Staking The Plains is a success.

Travis: This again goes back to why you and I work so well together, IMO. The starving squirrel and the ant. I always want to jump right in but you take the long term approach, which works more often than not.

Oh, I had a wedge salad yesterday and it was delicious.

Seth: I quit coffee three weeks ago to try to lower my blood pressure. The first week was hell, but I think I’m on track now.