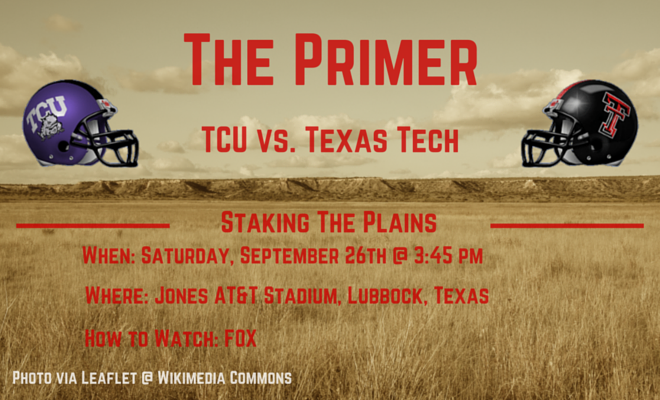 We set the stage as Texas Tech hosts TCU. How, when and where to watch, plus Vegas odds as well as catching you up on TCU thus far this season.

Last Week: TCU won 56-37 (ESPN box score) although TCU lost another defensive player, standout CB Ranthony Texada for the year, and they gave up 330 yards passing and 178 yards on the ground, 62 of which were by Matt Davis. The TCU offense is still humming along, putting up 56 points, while Trevone Boykin had 454 yards on just 30 attempts (that’s incredible) with 266 on the ground by the team. Look out for a shootout.

What’s at Stake: TCU played in Minnesota to open up the season and won 23-20, but it wasn’t easy. The Horned Frogs then coasted in wins against SFA and SMU. What’s at stake is that this will be the first conference game for both teams and this sets off a very tough three-game stretch for Texas Tech. I don’t think we need to remind anyone about what happened last year where Texas Tech lost 1,000-0 and there were allegations last year where our buddy, Matt Wallerstedt, allegedly gave the Texas Tech calls to the TCU coaches.

Miscellaneous: I’m totally not sure what to think going into this game. All we’ve heard is how the TCU is decimated with injury and that is true . . . the TCU defense is still performing at a high level, a top 50 team in terms of total defense, but they haven’t exactly played a ton of offensive teams, sans SMU, who lit the Horned Frogs up from a yardage standpoint . . . It truly is the Doctson show offensively and he really has been “the guy” . . . RB Aaron Green had a terrific day against SMU, running for 164 yards on just 21 carries and 2 touchdowns . . . TCU is still getting a ton of tackles behind the line of scrimmage, getting 11 TFL against SFA and 7 against SMU . . . they also did a great job of getting after the quarterback against SMU, 5 passes broken up and 4 quarterback hurries . . . don’t sleep on that defense as they are still pressuring the quarterback and making plays . . .