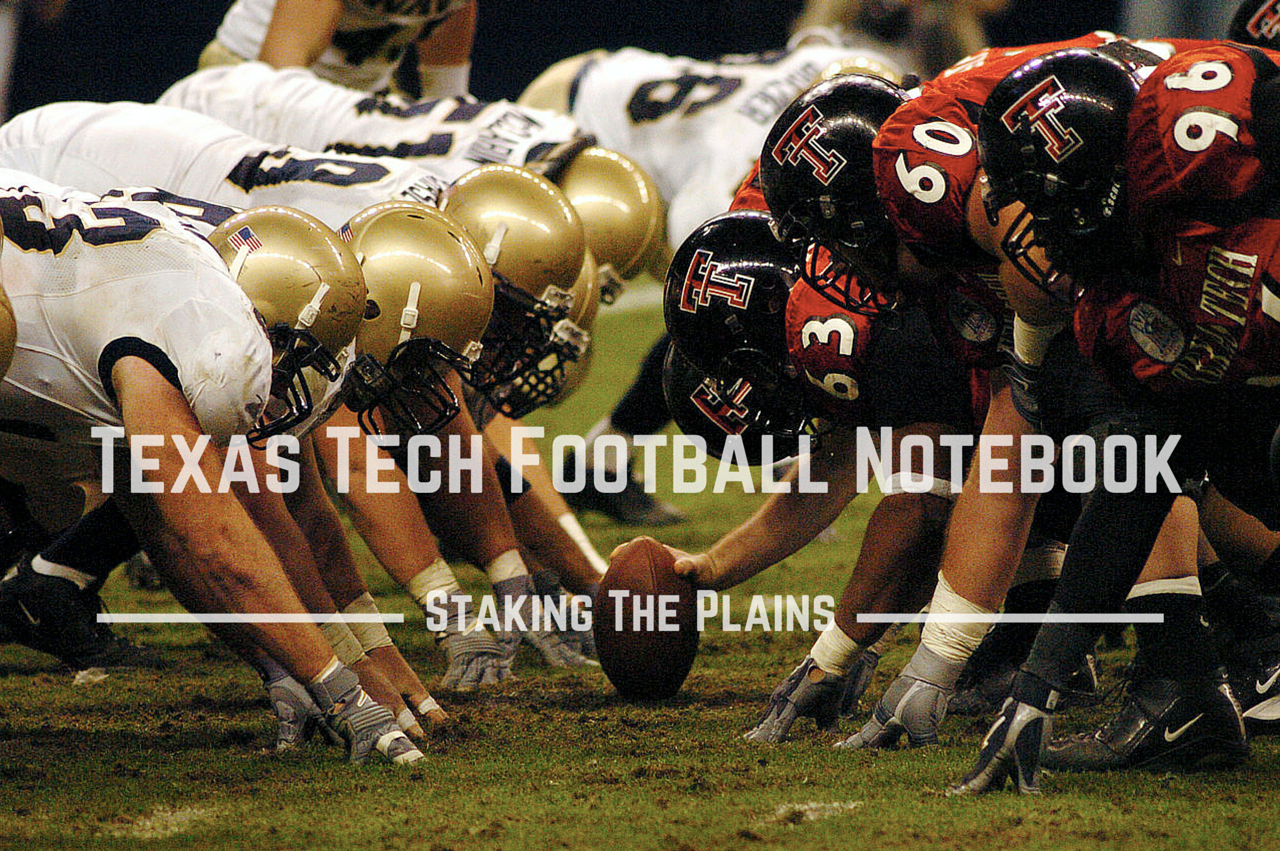 Lee Hays says Justin Murphy is impressing at right guard and some terrific video of Holub, Anderson and Rivera returning to Lubbock.

Holub, Anderson and Rivera Return to Texas Tech. Great to see this.

And How Cool is This?

“But man, I’ve never seen a kid play as hard,” Hays said. “Now, we have some things we’ve got to clean up, but as far as his effort, it was off-the-chart good.”

Here are some other notes:

In Fayetteville. LAJ’s Don Williams writes that nothing is going to come easy in Fayetteville and looks back at the history of playing in Arkansas. Excellent history lesson.

You Already Knew This, Arkansas Will Run the Ball. Arkansas head coach Bret Bielema said on Monday that the Razorbacks will have an emphasis on running the ball, via NWAOnline:

“Our offense functioned really well in the two minute, we just couldn’t get in the end zone,” Bielema said. “We definitely have got to be able to run the football. That’s an emphasis in our program that has got to come to light more than at any time ever before.”

Bielema said the team’s mistakes were pointed out in meetings on Sunday, but not to where they descended into rampant negativity.

“Before we go into meetings, I go ‘Listen, there’s a lot of people that would turn this into … a coming after you 100-percent session,’ ” he said. “I mean, we let them know that what we saw is not acceptable, but it didn’t turn into a discussion of your ancestry and ‘What kind of person would do this?’ It was more, this could be one of the greatest learning days of your life.”

How Toledo Did It. The Student Section’s Terry P. Johnson looks at how Toledo was able to beat Arkansas:

While those two stops were impressive, the biggest sequences of the game came on the final two drives for Arkansas. As most people expected, the Razorbacks put themselves into position to win the contest in the final series, driving to the Toledo 4 with just over three minutes remaining. Just as it had done at every other crucial juncture of the game, the Rocket defense rose to the occasion, stopping Arkansas on downs. A few minutes later, Arkansas — without timeouts — advanced the ball to the Toledo 16 with six seconds remaining. The Hogs were able to throw two passes into the end zone, but the Rockets’ secondary was up to the task. Two incomplete passes enabled Toledo to finish off the win.

Also from The Student Section, but from Matt Zemek, the biggest problem for Arkansas was the fact that Bielema had some culpability with his end of game management:

Near the two-minute mark of regulation, with Arkansas trailing by a 16-10 count, the Razorbacks faced fourth down and had three timeouts… until Bielema used one of them. Sure enough, Toledo was able to burn about 50 seconds on third down (after Arkansas burned its remaining timeouts following first and second down), and six more seconds in the process of taking a smart and appropriate safety. Given that Arkansas reached the Toledo 16 with six seconds left and was able to run two plays from the 16, it’s pretty reasonable to say that with 50 more seconds available, the outcome of the game might have been different.

Patterson Fired at Texas. Via Land Grant Gauntlet, Texas athletic director Steve Patterson was fired after after 22 months on the job. Quite an amazing run for Patterson, who seemed to alienate everyone in the Longhorn family. There’s a quote there that says that Patterson turned the Longhorn brand into a commodity to be sold. Patterson’s reign, lasted all too short for other fanbases.

Mahomes Needs to Stay Hot (This Sounds Dirty, But Isn’t Intended to Be). ESPN’s Brandon Chatmon writes that QB Patrick Mahomes needs to stay hot in order for Texas Tech to continue to be great:

Tech’s offense has been terrific, averaging 3.8 points per drive and 8.03 yards per play with Mahomes as the trigger man. The sophomore has connected with 10 different Red Raiders with Devin Lauderdale (19), Jakeem Grant (15) and Ian Sadler (13) having double-digit targets as his favorite receivers. It’s an offense that spreads the ball around, with the ability to have success against almost any defense as opponents don’t have anyone to zero in on.

Campus Photos. I missed this last week, but Totally Texas Tech had some terrific campus pictures as Texas Tech remembered 9/11.

Miscellaneous. ESPN has their weekly Big 12 recruiting scorecard . . . Land Grant Gauntlet has week 2 of ranking the Big 12 quarterbacks, not good as it was last week, but still pretty good for Patrick Mahomes . . . the DMN has their Big 12 power ratings and not much has changed for Texas Tech . . . Campus Insiders’ Pete Fiutak has his preview for the Arkansas game and picks the Razorbacks by double-digits . . . CBS Sports picks some of the best bets this weekend and says to take the over on 65.5 points with Texas Tech vs. Arkansas . . .