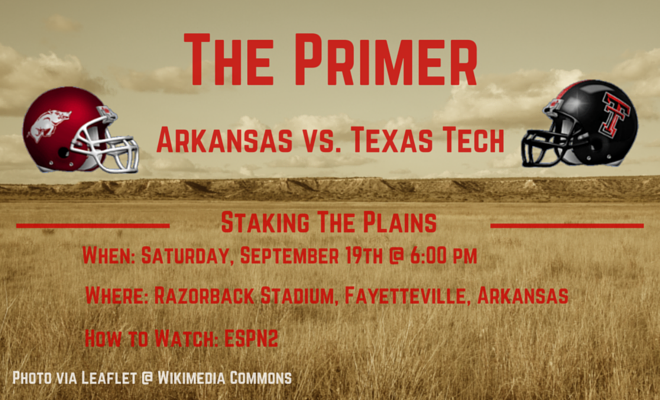 We’ve got how and where to watch the Arkansas game plus we look back to see what happened to the Razorbacks this week.

Last Week: Well, this was not the lede I was expecting to write last week. Arkansas lost to Toledo, 16-12 (box score via ESPN) and the thing that jumps out is that the Razorbacks only ran for 103 yards for the entire game and Brandon Allen threw 53 flipping times for 412 yards. He didn’t have a touchdown and he threw one pick. I just can’t believe that. Defensively, the Razorbacks allowed only 327 yards through the air and 81 on the ground, so it’s not like the Arkansas defense allowed a ton of yards and/or plays. Maybe the worst thing is that the Razorbacks only converted 5 of 13 on third down and allowed Toledo to convert 7 of 17. Those latter numbers aren’t terrible, but that’s not good enough for the Arkansas offense.

What’s at Stake: Arkansas is probably really angry at this point, so that’s great. I think Texas Tech fans are still worried about what exactly what Texas Tech is and the throttling from last year at the hands of Arkansas. Arkansas is looking to get back into the win column and will be playing at Fayetteville rather than Little Rock, so maybe that will help.

Miscellaneous: In reading the Arkansas game notes for their game against Toledo, it was mentioned that they have the most experienced offensive line in the SEC, which does not include a highly rated JUCO in Jeremiah Ledbetter (6-3/280), who is starting, and freshman standout, Hjalte Froholdt (6-4/299), who is in the two-deep, and it would seem that the Texas Tech offensive line should have a fun game here . . . QB Brandon Allen has improved, when I watched film on him last year, he was really pretty hit or miss and he has improved quite a bit. He’s not the best quarterback in the SEC, but he does exactly what Arkansas needs him to do and he can stretch the defense . . . the Arkansas offensive line also played more snaps than any other SEC team last year, which means that if you wanted to know why the Razorbacks are so effective, it starts up front . . . the tight end combination of Hunter Henry (6-5/253) and Jeremy Sprinkle (6-6/255) is incredibly tough to cover and they are both really really athletic and are not your typical big tight end, they can run . . .