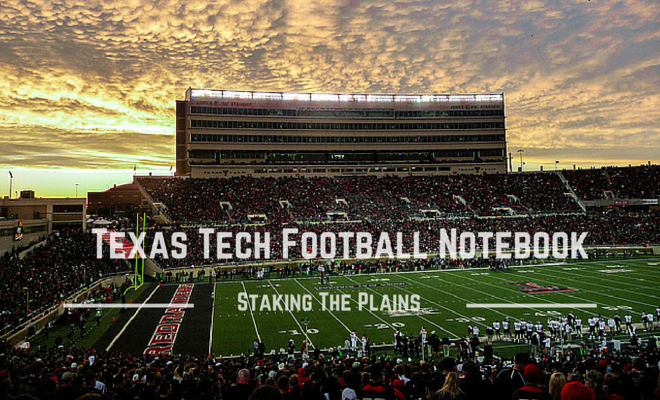 Kingsbury in the LAJ. Texas Tech head coach Kliff Kingsbury will write a quarterly article for the Lubbock Avalanche-Journal and here is the first article:

Throughout this offseason and during our pre-season camp, we have been using the motto “tough and together.” This phrase represents what we strive for this program to be and, even more so, is the embodiment of what West Texas and Texas Tech University has always been.

This community has thrived off working hard and treating people the right way. It hasn’t mattered what obstacles were in the way, this close-knit region has prospered. Fundamentally, our team is being built with the same approach.

“We learned from that lesson,” Gaines said this week. “You’ve got to treat each opponent the same, as if they were Big 12 play. So you’ve got to come out strong, you’ve got to play strong throughout the game and you’ve got to finish strong because everybody plays college football.”

Sam Houston Not Afraid. So, I’ve been spelling the mascot for SHSU as “bearcats” rather than “bearkats”. This is a result of a relatively simplistic frame of mind and being busy with everything else, but I’d also guess that I did the same thing during the summer when I wasn’t as busy. Anyway, I’ve misspelled this for pretty much everything, so just ignore whatever I’ve previously done and what I have set to be posted.

Via The Item’s JP McBride, SHSU isn’t afraid to take on Texas Tech:

“Last year, we were still trying to figure out who we were as a team,” Sam Houston State defensive tackle Jacobi Hunter said. “At the end of last year, we kind of got our team chemistry and camaraderie together. We’re coming into this game after our second camp together … knowing who we are, so it’s going to be a completely different game for us.”

TCU and Oklahoma State Win. Via Land Grant Gauntlet, Oklahoma State won 24-13 over Central Michigan and TCU beat Minnesota 23-17 last night with both teams looking pretty human, Baylor takes on SMU tonight, or their opponents being better than expected (it’s the first night of the season, who who knows?).

Miscellaneous. Baylor’s DE Shawn Oakman and S Orion Stewart have been suspended for the first game (without reason) against SMU . . . I thought this was something to just file away, but via the Texas Tribune, Houston has transferred from $100 million from it’s academic side to it’s sports programs, $106 million to be exact, to beef up it’s athletic programs . . . LAJ’s Don Williams is writing about the defining moments in Texas Tech football and writes about hiring Mike Leach . . . DMN’s Mike DuPon has his prediction for the game (I think this is a pretty good score) . . .