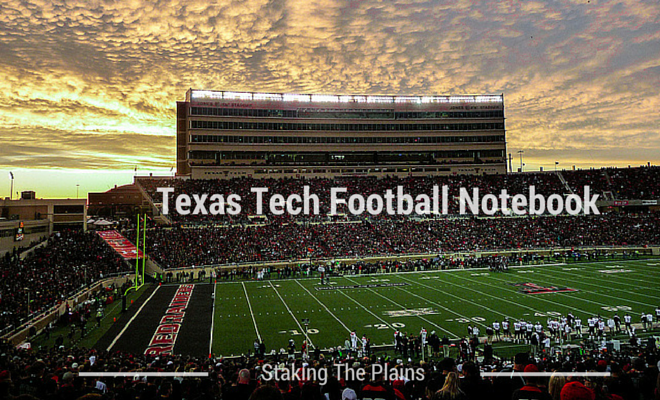 Another Wallpaper Schedule. Hat-tip to @TTUedits, we have another wallpaper schedule from Flickr user Daniel Johnson. Now you’ve got one for home and work.

Big 12 Previews Texas Tech. Via the Big 12 site, they take a look at Texas Tech. I don’t know if there is anything new here, most of the quotes are from other sources (hey Big 12, you could probably just go ahead and hire David Ubbben and you’d be totally optimal).

Ranking the Top 30, or Somesuch Players. Athlon Sports ranked the top 15 players, but there’s like 30 listed, in the Big 12, with Le’Raven Clark at #10, Pete Robertson at #13 and DeAndre Washington tied at #31.

What to Do to Win. DMN’s Chuck Carlton writes about how Texas Tech plans to rebound from 4-8, and it is much of the same of what we’ve talked about this spring and summer, which is no turnovers and a better defense. Carlton also has a fast fact sort of piece, which is sort of a quick-hit sort of preview.

Punts. LAJ’s Don Williams talks with punter Taylor Symmank, who has the best returning punting average and the surprise of the article is that Symmank runks a 4.4 and one of the fastest people on the team:

“He can run with the skill guys,” strength and conditioning coach Chad Dennis said. “He’s a 4.4 guy, actually. He’s in the 4.4s. He’s a fast, powerful guy. He’s not your typical kicker-punter most people think about. He’s a really good athlete overall.”

Kaster Knows There’s More Work to be Done. RedRaiderSports’ Will McKay talked with C Jared Kaster and says that there’s more work to do with the team and the offense:

“We want to be as fast as we can be, and we’ve still got to work on that. We still have to get into game shape, and Coach Kingsbury and Coach Chev have put in a great plan for us to do that in practice. If it takes extra stuff as the O-line, getting in extra gassers after practice as an O-line, we do it. It’s a work in progress. You have to stay at it, push and grind, and we’re getting there.”

Ivory Jackson Talks Recruiting. Via Amarillo Globe-News’ Lee Passmore, Texas Tech commit Ivory Jackson talked about recruiting and his commitment to Texas Tech and he says he’s not going to pull a “Castleman”:

“I’m committed to Tech,” Jackson said. “I’m not going to do what James Castleman did (verbally commit to Tech, then sign with Oklahoma State). I took a visit to SMU, but I’d rather stick with Tech.”

Miscellaneous. Deadspin previews the Big 12 and writes that Baylor and TCU are pretty good, but everything else is butt . . . SB Nation released their power rankings of every program and has Texas Tech at #68, behind Houston, Temple, Colorado State, Marshall and Western Kentucky . . .