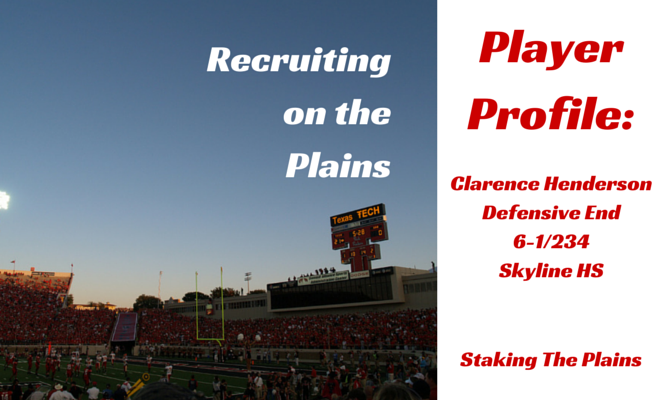 The Player Speaks: Nothing yet.

Scouting Report: Interestingly, the Scout profile has Henderson at 6-2/250, which is 15 or so pounds more than his Hudl profile. One other interesting note is that Joe Wallace’s Hudl profile says he runs a 4.96, while Henderson’s says that he runs a Nike Sparq verified 5.06. Henderson’s is probably more accurate than Wallace’s and tells you that 40-yard dash times for high school players is largely inconsistent and incorrect.

It is being largely reported that Henderson is going to play defensive end and that makes a lot of sense, especially if he’s already at 250 or so.

There are a couple of cool things happening here. Henderson is playing left tackle for Skyline and watching his video while playing left tackle at 234 is pretty danged fun, a call back to a style gone by, but Henderson pulls it off in high school. Henderson is a highly rated center, but as mentioned above, he’ll play somewhere on the defensive line. Maybe this speaks to Henderson’s versatility and what he’s able to do and take in from a football perspective and as an athlete.

Since all we have is Henderson playing left tackle, let’s see how that would translate to a rush defensive end spot. It’s tough to tell how explosive Henderson is, especially at getting up the field, but goodness, he has explosion off the ball when Skyline runs. And those feet and balance are something to behold. It’s really fun to watch him, darn near running an opponent off the field, which is something you just don’t really see any more, but he does it. I think Henderson definitely checks the box in terms of quickness and I think he’s got the upper body strength as it is tough to latch onto opponents like that at left tackle and not be strong, but coming from a defensive end, Henderson will have to pop those hands a bit more. This is really a fantastic athlete and one that I can’t wait to see film on from a defensive perspective. That may not happen until he starts his career at Texas Tech, but I’m a huge fan here.

Clarence, welcome to Texas Tech and Git Your Guns Up!