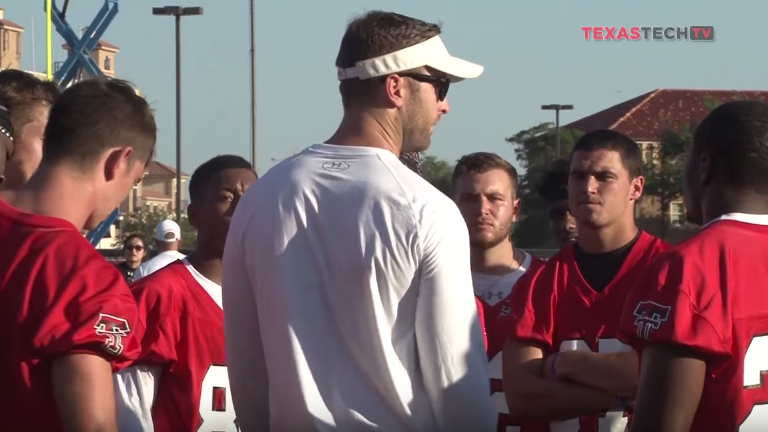 Texas Tech kicked off their preseason practices and we’ve got as much video, news, notes and links that we could find.

Williams Optimistic for Opportunity. LAJ’s Don Williams writes about how linebacker Kris Williams, who was injured all of 2013 and has finally worked his way back to being able to contribute and he believes that he has an opportunity to contribute and start:

Williams said in Gibbs’ scheme, he’s an inside linebacker most of the time, stationed alongside middle linebacker Micah Awe.

“He can play multiple positions, and he’s a thumper,” Haverty said. “Some of the games we’re going to play this year, he’s going to have to line up and hit a big guy in the mouth and knock him backward or stalemate. I think he can do that.”

Williams has always been as barrel-chested as any Tech linebacker, and he believes he’s suited for the spot he’s playing.

“I really think that’s my natural position,” he said. “I got in there and immediately it clicked.”

There’s more there, so go check it out.

Waites played high school ball at St. Michael’s in Austin, but as mentioned above, most recently played for Angelo State. Patterson played receiver at Whitehouse, presumably with Patrick Mahomes, and Parker also played the same year for Whitehouse. Jones played for Southlake Carroll and New Mexico State as a defensive back.

First practice is in the books! Now time to get the video up and work on getting better. Good to be back! #wreckem pic.twitter.com/bmDk1ifDUB

It’s All In the Beard.

Miscellaneous. The official site and KAMC’s Brian Holland have a photo gallery from yesterday’s first practice . . . ESPN continues their top 25 players and Le’Raven Clark checks in at #8 . . .